Artists take a medium and project themselves to create a whole new medium…nature does the same thing. nature is fractal…there’s a part when you allow yourself to become part of the process—like a wave, you ebb into it. the feeling and the person are the same. we are motion and principle. when you have motion, you have manifestation.

nothing is really static. the artist realizes he gives of himself, he gets back and it gives to another creation. waves…everything, mankind, we all move forward in waves. this is how we evolve into the future.

charles’ hado series is particularly transcendental in this way. in fact, transcendence is his motive and also his medium. the large panels are a concentration of swooping, colorful motion. wildbank uses a laptop to work out his ideas before setting them to the canvas, an aspect of fluidity in the artist’s process that winds up also being part of the work. he renders what are completed natural impulses, and they feel like they keep going.

the viewer can see the wave, the energy, the motion, but it is the process that makes it real. the wave is the medium, but the new technology and visual modes bring exterior symbols into the painting. they are triumphant. there is height and depth. the artist’s attempt to “pull light out of the canvas” is palpable. “the fields of color leap into the air creating a sea within the sea.” 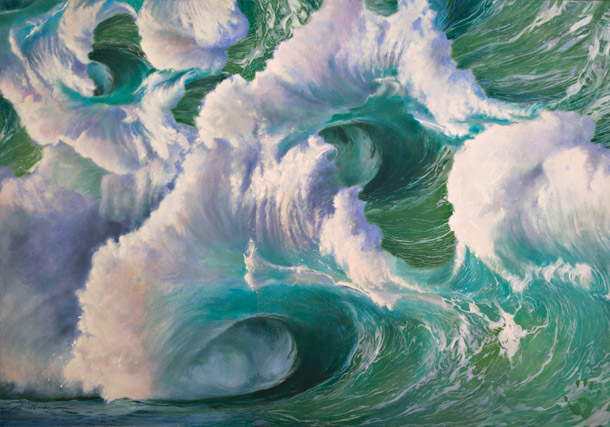 “The Wave” photo courtesy of artist