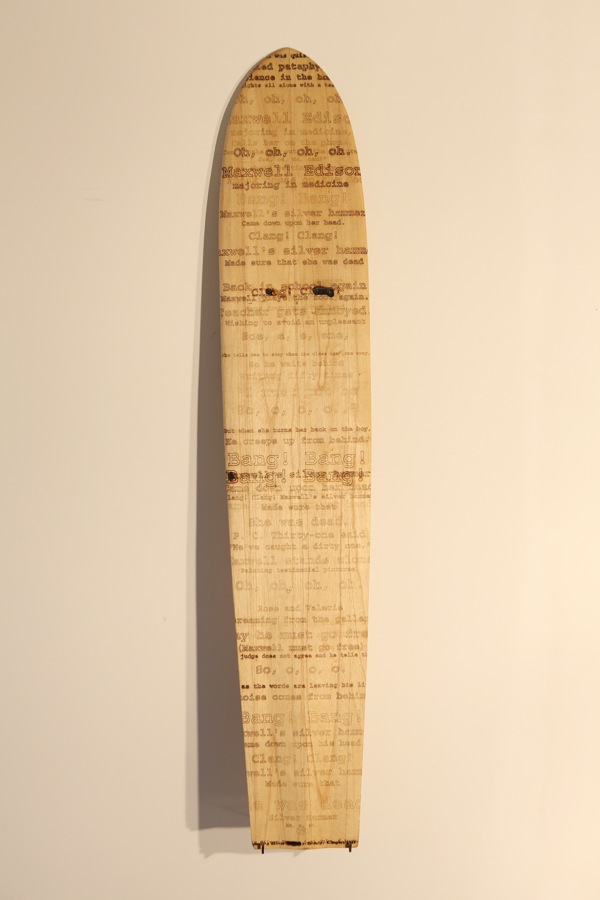 Rose and Valerie screaming from the gallery
Say he must go free
The judge does not agree, and he tells them so
But as the words are leaving his lips, a noise comes from behind

You can beat the heat and quench your desire for cultural stimulation by attending an art opening on Thursday, July 5th at a pop-up gallery on Jobs Lane in Southampton. The show is being curated by LOOC ART, a new venture co-founded by Southampton natives– art consultant Lara McLanahan and art collector/former trade show producer Claire Johnston.

“LOOC ART is a play on words using our names (L-Lara and C-Claire), but it also refers to how we approach art,” notes McLanahan. “We’ve reviewed a huge amount of artists to distill it to these six for the exhibition, and we hope that our audience will take a close look at not only the art we are offering, but also the other parts of our business… Pop-up shows will be one format that LOOC ART will be utilizing to share our passion for contemporary art. We’ll also be selling art from our web site, conducting studio tours and developing an outlet for MFA grads to sell their works.”

Vu, who teaches at Columbia University, grew up in Vietnam during the war and made money shaping surfboards for the G.I’s who were stationed there. His latest surfboard series features a more honed product, hand-shaped from a light-weight wood called paulownia. And the laser-engraved images and text are inspired by The Beatles’ “White” album, which was introduced to him by one of the GI’s, and ended up changing his life.

“Even though I was introduced to the Beatles as a child, I consider their music to be as relevant now as it was then, it has an incredible universality to it,” says Vu. “The imagery on the boards is made up of layered drawings that describe a dystopian vision of our future– an epic clash between man and machine, nature and technology, which I see as the defining tension of our modern era…The ‘Maxwell’s Silver Hammer’ board features images inspired by the structure of the human eye like octopi from japanese shunga prints, floral forms, and rocket boosters.”

Vu’s elegant but practical sculptures differ immensely from Fonseca’s vibrant Intaglio etchings. Having studied and worked in Spain, France and Italy, where he’s based part of the time, Fonseca’s paintings have been shown internationally in places like the Smithsonian Institute, the Met, the Whitney Museum of American Art and MOMA. Intaglio etching, involving as many as 10 copper plates, is a demanding process using tools and surfaces outside Fonseca’s normal working process.

“The etchings both complement and explore discoveries and developments in my work on canvas and paper,” says Fonseca. “The process of etching demands that I deconstruct the elements of a work and then reassemble them, allowing me to understand and uncannily get inside a work from new and unexpected viewpoints.”

“‘7 String No. 3’ was the result of many trial runs before its final state was found. I wanted to give the normally flat etching surface a more physical life and found a way to lay down string on the surface– under a thin translucent Japanese paper,” reveals Fonseca. “Repeated overlaying of washes of color over both the rich orange/red and over the lighter areas gave this work the kind of saturation of color that keeps the surface alive… These etchings are not abstractions of things or symbols. Rather, they are wholly invented forms that activate a certain sense of movement and scale shift that keep the eye moving through the image in new paths, tracing and revealing itself.”

For more info go to: http://www.loocart.com.