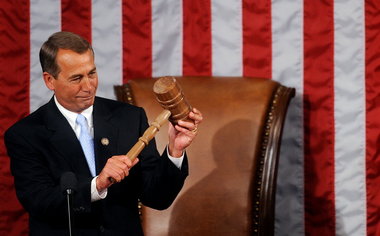 You will be in session for 25 more working days before Election Day. Then hopefully, you will officially become lame as the OUTGOING speaker in the Lame Duck Session. For those paying attention, you have been lame all along.

When you became Speaker of House, you made great show of taking possession of the gigantic gavel. You know what they say about men who have big tools and don’t know how to use them. What a waste! Yes, Mr. Speaker. Your time as Speaker of the House has been a great big, orange, weepy, ineffective waste. The tragedy of it is two-fold: you follow one of the most effective Speakers in the history of the House of Representatives, Nancy Pelosi, and your ineptitude comes at a time when the Congress and the country needed a statesperson with political acumen to hold the Speaker’s gavel.

The 112th Congress could be called the Looney Tunes Congress. There are some folks in the House of Representatives who are so comical that they are better placed in a cartoon than in Congress. Joe Walsh, Allen West, and Michelle Bachmann, to name a few, all deserve their own special clown car. Allen West makes ridiculous statements that are throw-backs to a drunken, discredited, red-baiting Congressman who brought a shameful time to America. Yet there are some who take this person seriously. Allen West is one of the best “race hustlers” around, invoking provocative images of slavery to suit his own political agenda. He needs to get off the “plantation” of crazy where he is currently enslaved, and find the freedom of sanity and reality.

Joe Walsh is a dead-beat dad who thinks nothing of denigrating and disrespecting a decorated war hero, who also happens to be a double amputee, to suit his own craven political agenda. By the way, what are Joe Walsh’s legislative achievements while in Congress? What has he done for the people of his district? I doubt it’s very much.

Michelle Bachmann… Where to start or end with her? Her biggest legislative achievement was to guarantee your unthreatened ability to buy incandescent light bulbs. I know that the most important item on your political agenda over the economy, education, the environment and other trivial things was light bulb. Yes, the future of light bulbs was keeping you up at night. Her latest stunt was to call the Affordable Care Act the “largest tax increase in American History.” Wow, lie much?

Yes, Mr. Speaker, you with your big gavel couldn’t herd these crazy cats into acting in the best interests of America. We have seen it time after time.

But you, Mr. Speaker, have been like Wile E. Coyote to President Obama’s Road Runner. You have allowed the TEA Party extremists to fill your head with legislatively wasteful and politically destructive plots. Rather than helping you catch the President, all you have gained for your troubles is the political equivalent of an anvil falling on your head – dismally low approval ratings for Congress, 17.8% according to Real Clear Politics Average of Congressional Job Approval polls through June 18, 2012.

As the TEA Party dropped an anvil on your head, Wile E., I mean, Mr. Speaker, it was also dropping boulders and anvils on groups who expected their elected represented to look out for their interests. We expected you to bang your gavel and lead, not bang the gavel on our heads. It was the American people who suffered most. As you collected your annual salary of $223, 500, with benefits and pension, American citizens waited as you postured and played politics with our lives. As you took your salary and did nothing for the American people, the gavel lays impotently in your hand.

Instead of reauthorizing the Violence Against Women Act (“VAWA”), and expanding the Act so it reaches all victims of violence, the VAWA sits in limbo a victim of the violence of the political act forced on it, in the same way that every woman and members of the LGBT community who have violence forced upon them will be left without recourse if this act isn’t reauthorized. But at the same time, this same Congress was all too happy to push this government to the brink of a shutdown over an effort to defund Planned Parenthood.

It bears repeating it is a sad fact that Planned Parenthood is the bogeywoman for abortion, but abortion represents 3% of the services of the services they provide. The rest of the services they provide are for the HEALTH of a woman, e.g., routine screenings such as pap smears and mammograms. By the way, Mr. Speaker, abortions in the first trimester are a legal medical procedure and a matter of CHOICE for the mother and her family. None of that mattered. You were willing to allow your big gavel to lay impotently in your hand as the country careened toward a shut-down. Women suffered during your term as Speaker. We will remember. We will deal with you harshly on Election Day.

The gavel was placed in your hands because the GOP promised to be the party of jobs. Jobs, jobs, jobs. Yes, it was a job alright, a con job. Do a Google search for “GOP jobs bill in 112th Congress.” The results are extremely spare, especially for the party that claimed they were going to be job creators. What happened? You lied to us. This ascension had nothing to do with jobs, and everything to do with power. You wouldn’t even vote on the Jobs plan the President sent to Congress, not once. No, the goal was never jobs, it was always power. All I can say is “well played.” Because that is what you did, you played the American people. Crafty.

But the gavel still lays impotently in your hand. A gavel you should wield with power, authority and finesse; instead, you are run around by the freshman members of your caucus. How embarrassing. That was especially apparent when you allowed the little boys and girls in the TEA Party Caucus to publicly throw their un-statesmanlike tantrums as the country had an unnecessarily prolonged negotiation about the debt ceiling last summer. The debt ceiling had been raised almost 80 times since 1960, mostly under Republican presidents, as you well know. Yet, you procrastinated like a teenager with a term paper on the debt ceiling issue, which meant you manufactured a crisis that resulted in the first downgrade of the US credit rating in America history. Not an effective use of your power, if you ask me.

Yes, Mr. Speaker, there are 25 days when Congress will be in session before Election Day. You just wasted one of those days this past week on another useless vote to repeal the Affordable Care Act. And yet again, Wile E. Coyote, the Road Runner stuck his tongue out at you, said, “Beep, Beep!” and sped away…for the 33rd time.

But the big gavel lays impotently in your hand. And America watches and waits because there are problems that still have to be solved in the 25 working days and in the time until your impotence becomes lame impotence in the Lame Duck Session. The debt ceiling looms on the horizon – again. In your finite wisdom, the fix put on unemployment and the payroll tax holiday was temporary, so they are expiring. Happily, the Bush Tax Cuts are expiring, but the President and most of America wants you to extend them for those with annual incomes under $250,000. And yes, VAWA is still sitting out there waiting for reconciliation in conference. Adopt the Senate version, and let’s get on with it.