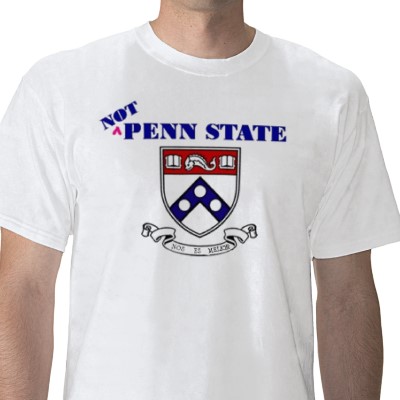 I went to college at the University of Pennsylvania. I bought a t-shirt that actually said “Not Penn State.” After the events of the past several months, I think folks who attend Penn State wish they could say “Not Penn State” when asked about the turmoil swirling around the football team. The fans of the football team are reeling today after a series of blows delivered by the University, the Big Ten, and the NCAA.

The child sex abuse scandal of convicted pedophile Jerry Sandusky continues to cast a long, dark, soul-sucking shadow over State College, Pennsylvania, which, in a sad bit of irony, is nicknamed “Happy Valley.” The actions of a few men continue to have far-reaching, significant consequences for thousands of Penn State students, alumni, fans, and the surrounding community.

Sunday, the life-sized statue of the late Joe Paterno was removed from its place in front of Beaver Stadium. Woosh! A solid blow to the solar plexus of Penn State fans who worshiped Paterno, or JoePa as he was known to the Penn State faithful. But yesterday, the NCAA delivered a flurry of combination punches that sent the Penn State football fans crashing to the canvas. JoePa’s 111 wins from 1998 to 2011 would be vacated, and with it, his place in the record books Rather than impose the “death penalty,” which is removing a team from the regular season and any bowl eligibility, the NCAA decided to starve the beast.

The NCAA’s sanctions on Penn State will surely cripple this team going forward and make it very difficult for football to become the life’s blood at that institution again. After the personal assault on Joe Paterno’s legacy, they went after the program itself. First, the NCAA hit Penn State with $60 million in fines, which is about what the school made on football in a season. So don’t be too upset about that. Then the NCAA banned Penn State from the postseason for four years, which hits a football program in the pride and the pocketbook—completely appropriate and a small price to pay. The NCAA will cap scholarships at 20 below the normal limit for four years. I find this sanction unfortunate because Penn State had an impressive graduation rate, so the folks hurt by this are the student-athletes, and at Penn State, that term wasn’t an ironic joke as it as at most other Division I-A football programs. The school also will be on probation for five years. The Big Ten Conference will withhold Penn State’s share of bowl revenues, approximately $13 million over four years. The funds will be donated to children’s charities. The Big Ten, the conference in which Penn State plays football, like the NCAA, arrived at the outrage party LATE, but better late than never, I suppose…

In short, the school is out from under the discipline of the NCAA in five years. It may take longer to rebuild, but so what? There are young men out there whose lives are irreparably damaged because the religion of football at Penn State became more important that the welfare of the most helpless among us—children. So if a large, prosperous university has to take a hit, do I feel badly about that? Not so much. I am concerned about the businesses that depend on Penn State football. In the same way that the NCAA wasn’t asking the right questions when this was happening, they aren’t asking the right questions about the community surrounding Penn State University.

There was an effort to bow before the god of football at Penn State. Men, who had the power and the ability to intervene, did nothing. Edmund Burke was so right…The only thing necessary for the triumph to evil is for good men to do nothing. What happened at Penn State was so much worse. These men, Graham Spanier, Tim Curley, Gary Schultz, and yes, Joe Paterno all allegedly worked in concert to conceal, and thereby encourage, the acts of a voracious, now convicted, pedophile. The Freeh Report commissioned by Penn State is damning and presents some inescapable conclusions about fanatical worship of the god of football, above all else, including education and safety, at Penn State.

The statue of JoePa is gone, as are his record, his wins, and much of his reputation. To the Paterno family, I say, as awful it must be to hear the reputation of your loved one savaged and attacked, rest easy with the knowledge that no one ever raped or sodomized him. There are countless boys who can’t say that, and Joe Paterno’s silence played a part in allowing that to continue. His good deeds are still there. But this stain is now there as well. Have some compassion for the survivors as you fight to protect the legacy of Joe Paterno. He should have fought as hard to protect those boys.

The football program at Penn State, deprived of water, food and sunlight for 5 years…most things would die. Let’s see if this football program has the will to live and be a remarkable come-back story.

The weasels who allegedly engaged in a cover-up of Jerry Sandusky’s criminal behavior on Penn State property, let’s see how they fare in criminal and civil court. 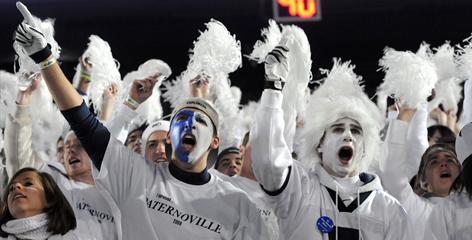 The fans, the Penn State faithful who paint their faces and cheer their voices away every Saturday during the football season, for you, I have a special message. I understand your disappointment about the team. Some of you believe you are being punished for something that had nothing to do with you. Maybe. But the system is broken. The only way to fix it is to intervene now. Think about the young men who were hurt. What if that was you, your brother, son, boyfriend, husband? Wouldn’t you want some form of justice, even if was justice delayed? Justice delayed is better than justice denied. Cheer for justice. Justice can be as kick-ass as football, better if you ask me. Cheer for the survivors, because what they lived through is worse than anything we can imagine. Don’t be angry about the loss of anything to do with football in the face of shame and confusion the survivors have to contend with.
Jerry Sandusky is in jail, Satan preserve Sandusky’s soul for his pleasure and entertainment. There are more survivors of Sandusky out there. I hope that the young men who were abused by this very sick man will all get the help and support they need. I hope the fact that Penn State has been dealt with harshly will bring some peace to these men who have been living with the shame and anger of what happened to them in Happy Valley. 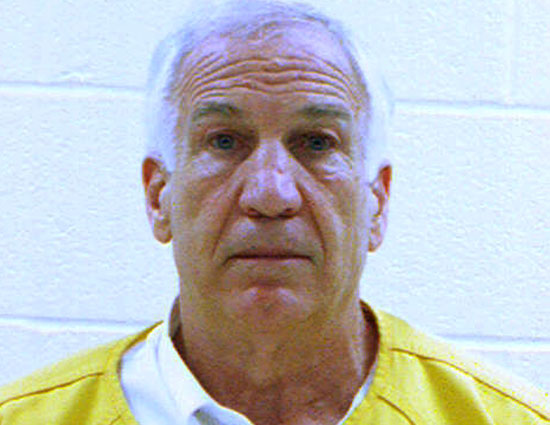 If there is shame to be had, it is not by the Sandusky survivors—it is those who left a predator roam the athletic facilities at Penn State who should feel shame. But there is plenty of anger to go around. Now that justice is being served, hot and fresh, State College has a chance of reviving joy for everyone in Happy Valley.