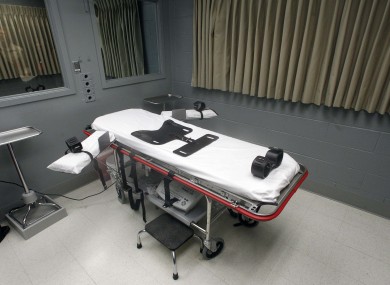 By the time a person ends up on death row, he or she has failed several times, which resulted in the ultimate catastrophic failure, such as the taking of another’s life. But at the risk of sounding like a bleeding heart liberal, society has failed a death row inmate as much as they fail themselves. Before the death penalty is imposed, the convict is already dead – society is killing him softly before our eyes.

Capital punishment crops up periodically. Texas, the most proficient executor of executions, is the reason that folks are questioning capital punishment again. On Tuesday, August 7th, Texas executed Marvin Wilson, a severely mentally disabled man with an IQ of 61, despite the fact that the US Supreme Court had previously held that death wasn’t an appropriate punishment for “a mentally retarded criminal.” But in the end, the Supreme Court denied Wilson’s request for a stay, and Texas killed him softly, as they had killed six inmates before him this year, and nine inmates on death row scheduled to die after him in 2012.

Marvin Wilson wasn’t the only high-profile execution in recent months. On September 21, 2011, the state of Georgia executed Troy Anthony Davis, a man convicted for the murder of Savannah police officer Mark MacPhail. On the same day, Lawrence Brewer was also executed for the racist, hate crime that was the killing of James Byrd. The Davis execution drew national and international attention, including a last-minute delay of execution from the US Supreme Court. The Brewer execution occurred with less fanfare and controversy, but the same result—a state-sponsored murder, I mean, execution.

The death penalty has become an applause line. Last summer, Texas Governor Rick Perry received the loudest applause of the evening when his record-breaking number of executions was mentioned during the GOP Presidential Debate at the Reagan Library. At a time when we need jobs and a reinvigorated economy, we all should have noted that response with concern.

As we think about this issue, the Bill of Rights starts us off on the right track. The Eighth Amendment seems clear. It states:

Excessive bail shall not be required, nor excessive fines imposed, nor cruel and unusual punishments inflicted.

Cruel…if it’s cruel for a criminal to take a life, does it suddenly become okay when the state takes a life? The short answer is that it doesn’t. The hypocrisy and moral equivocation required to make this argument work isn’t worth the effort. Unusual…One death due to capital punishment, is one too many for me. Killing another person should always be deemed unusual, regardless of how commonplace the practice becomes.

For a brief shining moment, the United States was on the right side of this issue. In 1972, the US Supreme Court put a temporary end to the death penalty in the Furman v. Georgia ruling. According to the Death Penalty Information Center, “ In the Furman decision the Supreme Court set the standard that a punishment would be “cruel and unusual” if it was too severe for the crime, if it was arbitrary, if it offended society’s sense of justice, or if it was not more effective than a less severe penalty.” But we didn’t stay on this path for long. By 1976, the Court ruled that capital punishment was constitutionally permissible. We’ve been holding state-sponsored murders ever since, with some quibble about how we choose to conduct these state sponsored murders.

The death penalty dates back to ancient Babylon and the Hammurabi Code. We live in the immediacy of the digital age, yet we employ a penal practice that dates back to the 18th Century B.C.? The impact of race and class on who receives the death penalty cannot be overstated. Nor can the fact that there is no “do-over” for an innocent man who is executed.

Troy Davis’ guilt was an open question due to valid issues that created a reasonable doubt. Lawrence Brewer’s guilt was never in question. Marvin Wilson’s severe intellectual limitations with an IQ of 61 were not in question. The victims’ families will never get their loved ones back, so the vengeful, blood-lust for execution doesn’t fix the ultimate problem for them. But society has a larger problem: as the last Western, industrialized nation to employ capital punishment, should we be proud of this dubious accomplishment? I say no. The death penalty has no place in 21st century America. The men and women on death row are in a hopeless situation. But it is nothing new for most of them…they are dead before they get to the death chamber. We have already killed them softly with neglect and hopelessness. The injection is a mere formality.