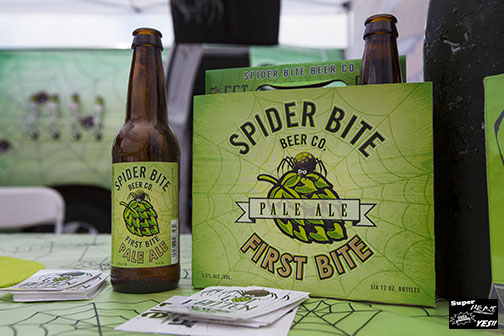 “We planned on bottles from the beginning and our label was designed before we were even licensed,” said Larry Goldstein, who opened Spider Bite Beer Company with Anthony LiCausi in October 2011. “We went with six-packs because it is a good format for our pale ale, as far as serving size and amount.”

“We’re keeping Boris to four bottles because it has a higher alcohol content than First Bite,” said Goldstein. “We’re also discussing having Eight Legged RyePA in bottles, as well.”

5.5% ABV. This amber colored pale ale was the first beer we brewed together, so it was only fitting to name it FIRST BITE. Generous additions of American hops, light body, and a dry finish give it plenty of flavor and aroma while still remaining highly drinkable. YOU GOT BITTEN.