LONDON – Near the finish line, which was situated perfectly in The Mall, the beginning and end to one of the more surreal event setups in all of London for this year’s summer Olympics, Russia’s Olga Kaniskina and Elena Lashmanova put on a show in the 20k race walk.

Kaniskina, who won the previous three world championships and a gold medal at the 2008 Olympics in Beijing, led for almost the entire race, but Lashmanova, within striking distance, saw an opportunity to charge and win the color medal she really wanted: gold.

Like a head-to-head battle down the straight away in a NASCAR race, Lashmanova and Kaniskina gave the fans in The Mall and the viewers at home on NBC Sports Network a performance to get out of their seats in angst about. The strenuous tension of competition that sets in for fans – possibly in no greater stage then the Olympics – as one athlete overcomes adversity to capture victory is remarkable. Lashmanova edged fellow countrywoman Kaniskina for the gold and set world and Olympic records in the event with a 1:25:02 finish. Kaniskina was seven seconds behind at 1:25:09. China’s Shenjie Qieyang won bronze (1:25:16).

For America, and for Long Island specifically, the race that mattered was the one on the other end of the 20k course that ran past Buckingham Palace, past the Queen Victoria Statue and the some 10,000 fans who came out in droves and stood 15-20 deep around the 12.4-mile course on a gorgeous London summer day, Saturday, August 11. It was about Maria Michta, the walking scientist from Nesconset, N.Y. who affirmed her love for race walking as a student at Sachem High School and has since gone on to earn the status as the No. 1 ranked competitor in the event in the states.

By the time Lashmanova captured her own Olympic glory, Michta was on her final lap, blitzing past the Palace – the Queen possibly inside watching from a window – saying Happy Birthday to her fiancé Joe Coffey, who traveled with eight of Michta’s family members, including the Coffey clan, to London for a moment in their lives they’ve been envisioning for as long as Michta adapted her own slogan of “dream, believe, become.”

The goal of becoming an Olympian had been set for a couple of years, but only became a reality on July 1 as she narrowly beat Miranda Melville at the U.S. Olympic Trials. By that point Michta, who graduated as valedictorian from C.W. Post in 2008, had already taken a six-month sabbatical from her doctoral studies at Manhattan’s Mount Sinai College of Medicine, where she is competing against Hepatitis B in the lab as a microbiologist.

Less than a month after the trials Michta was off across the pond, walking in the opening ceremony at the monstrous Olympic Stadium in London. She gained more national recognition when she made an appearance on NBC’s Today Show with Matt Lauer, Al Roker, Ryan Seacrest and Maria Menounos, teaching them the intricacies of the race walk.

“I was ecstatic to say the least,” Michta wrote on her blog, “what a great opportunity to get positive media attention as well as an excellent chance to educate the general public back home about my Olympic event.”

She also harnessed her Twitter presence, gaining more than 1,000 followers during the games and the coveted verified status symbol on her account and she kept the Sachem and Long Island communities engaged and informed on her daily schedule throughout.

On race day, Michta was in 46th place at the 10k midway point and continued to charge hard, picking up ground as she walked faster and stronger. She was 36 at 12k, 32 at 14k and finally 29 at 16k, where she eventually finished. Those tuned in at home were forced to watch the race up front and rarely saw Michta forging her own path.

The race, nearly a powerful memory by the time she made Coffey’s day with a birthday wish, – as if he needed more then to see his love reach her dream anyway – turned out to be the most successful in Michta’s career. She recorded the second-fastest time ever by an American woman in the event and the fastest by an American woman at the Olympics, finishing in 1:32:27. The previous American Olympic record was 1:34:15 set by New Hampshire’s Joanne Dow in 2008 at the Beijing games. Michta, who cut 2:25 off her personal best mark, also added a 10k personal best time of 46:02 during the first 6.2 miles of the race.

“I think I raced the first [kilometer] with my head and my last 19k with my heart,” she said after the race. “It was the best race in every scenario – I wanted to set a 10k pr, get the Olympic A standard, set a personal best, everything I wanted and more happened today. It is just a dream come true, everything that I did getting to this point has all been worth it to have a race like this.” 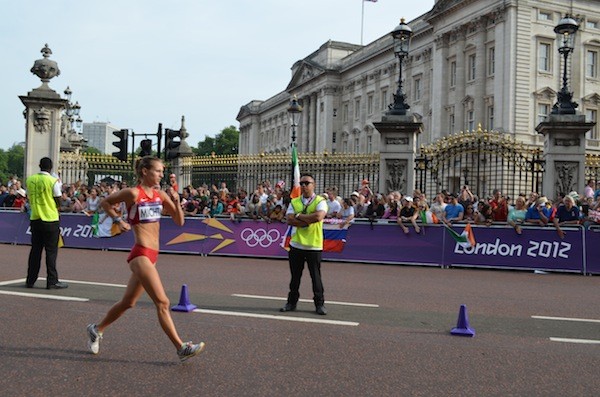