Sex, bread and videotape have all played roles in the life of Stuart Match Suna, a key behind-the-scenes player in the movie worlds of New York and the Hamptons.

Suna, who grew up in Roslyn and now counts Alec Baldwin and Howard Stern among his friends, is the president and co-owner (with brother Alan) of Silvercup Studios in Long Island City and a founder and the chairman of the board of Hamptons International Film Festival, which celebrates its 20th year in October.

He can also boast that in 1997, when he moved out of his Queens apartment with his wife and two daughters, Sex and the City moved in.

Suna started his career in movies and television almost by accident. He was an architecture student at Carnegie Mellon University, home during his Christmas vacation in 1979, when he accompanied his father
Harry, a sheet metal contractor, to the abandoned Silvercup Bread factory.

It wasn’t Suna’s first visit. “I remembered going on a tour of it with my Cub Scout troop from Roslyn. We got a loaf of bread at the end.” While speaking with the building’s caretaker, Joe Szabo, he said they discovered that a major tv network—NBC or CBS—had also been interested in purchasing the factory. That planted an idea, and four years later, Harry and sons Alan and Stuart opened Silvercup Studios.

In 1987, a year after marrying Vicki Match—they both made Match their middle name—Suna transformed a former walk-in refrigerator into a duplex apartment where the family would live for the next decade. “As an architect and a sculptor, I wanted to have a loft space, so I built one here instead of in Soho. It was a manifest of my dream, to build my own loft apartment.” He never found time to sculpt, but he did have other adventures.

“While we were living here, Howard Stern, another Hamptonite, was shooting his movie Private Parts. He also took an office below our apartment and made it into his pied-à-terre, since he was doing his radio show and tv and the movie here, and his home was out in Old Westbury. It was interesting getting to meet him. He’s a very sweet guy.” Really? “Yes,” Suna insisted as he sat in a conference room in the former bread factory. “He’s a regular guy.”

Later, the family moved because his daughters—Zoe, now 20, and Rose, now 16—were attending the 92nd Street Y nursery school and having difficulty getting play dates. “Parents worried about their kids going to Queens. Even the island of Manhattan was scary then.” In the intervening years, the area around the studio building (and a nearby outpost called Silvercup Studios East) has become more residential, with new apartment buildings, restaurants, art galleries and other amenities. Suna pointed them out as he stood on the roof beneath the giant Silvercup sign.

One of the new buildings, a luxury condominium called The Industry, was built by Silvercup, which has all along been in real estate alongside the tv and movie business. Another venture, Silvercup West, a projected complex near the Queensboro Bridge with apartments, offices, a catering hall, a museum, studios and restaurants on the river, is underway but will take a long time—he won’t say how long—to finish.

Suna and his family now live in Manhattan, and their old loft has since become a production office. “When we moved out it was taken over by Sex and the City. And when they had a summer hiatus, it was taken over by Adam Sandler for the movie Big Daddy. Then Sex and the City got it back, then Adam Sandler had it for another movie, Little Nicky.” As he passed by the office on the way back from the rooftop, Suna mentioned that the CBS series Unforgettable is using it now.

Among the other current tv shows using Silvercup sound stages are Gossip Girl, Person of Interest, White Collar and 30 Rock. Past shows include Ugly Betty and The Sopranos. Films include The Devil Wears Prada, Working Girl, Broadway Danny Rose, Do the Right Thing, Julie and Julia and both Sex and the City movies. Commercials and fashion shoots also keep the place buzzing. 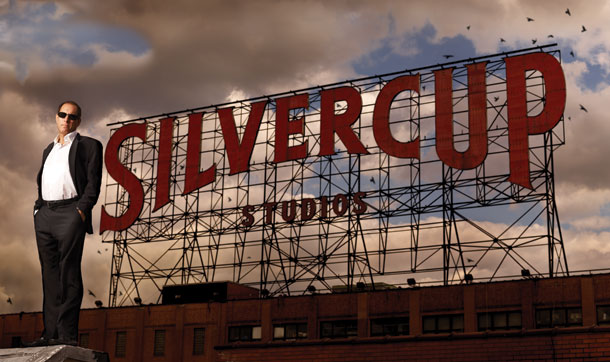 “They’re tenants. We’re like a hotel. We’re like the Ritz,” Suna said, explaining that he doesn’t make movies or shows. But he doesn’t see himself strictly as hotelier or landlord. “I like the creative process and I feel I’m still creating things. I’m creating environments for film with my business.” As the board chairman of the Socrates Sculpture Park, a riverside area in Long Island City, he’s also helping to give artists opportunities to create and display large-scale sculptures and installations. He’s always been creative about getting to do the things he wants to do, he added. In Roslyn, he organized groups for a ski tour company so that he could go for free. These days, he enjoys taking photographs while on trips to exotic places like Tanzania and Morocco, and sculpting the trees and landscape on his six acres of property—a former dairy farm—in East Hampton.

And, of course, as chairman of the Hamptons International Film Festival, he’s the guy who has been helping the festival grow and branch out.

“He’s one thousand percent committed to making it the best festival it can be. He’s very involved in the future health of the organization,” said Karen Arikian, the festival’s executive director. “He’s kind of the backbone of the organization.” On the board for all 20 years, Suna has chaired it for the last 15. This year, longtime festival supporter Alec Baldwin will join him as honorary chairman. “Stuart asked him in the spring, and he agreed right away,” Arikian said.

Baldwin, who owns a house in Amagansett and hosts festival-sponsored documentary programs at Guild Hall, gave $250,000 to the festival last year. It was one of several donations he made to arts organizations with proceeds from his Capital One ad campaign. “I’d like to see more celebrities take some of their money and support the arts. It’s very rare,” Suna said.

Recently, Baldwin hosted a fundraiser for a charitable organization that Suna chairs, the Children’s Tumor Foundation, which helps people with neurofibromatosis, a disorder that Suna’s daughter Rose has, though her case is mild. Suna said successful people like Baldwin and Steven Spielberg inspire him because they “give back with their time and their money.”

Working with the film festival is a way Suna gives back. “I see it continuing to grow in depth and breadth, summertime and wintertime in the Hamptons and in the city.” The festival already has a reputation for choosing interesting films, from shorts and foreign films that probably won’t have large distribution to such blockbusters-to-be (before anyone’s heard of them) as Slumdog Millionaire, The King’s Speech and The Artist. In recent months, along with its ties to East End institutions, the festival had events with The Museum of Modern Art and Film Society of Lincoln Center.

This year’s Hamptons Film Festival will have new features, too, Arikian said. Besides honoring an industry leader, as it has in the past (this year it’s Focus Features CEO James Schamus), it will pay tribute for the first time to an often-overlooked discipline. Costume designer Ann Roth will be honored at an event hosted by Nathan Lane. A photo exhibit will feature Nobel Prize winners and a few Nobel laureates will attend the festival, including mathematician John Nash, scheduled to answer questions after a screening of A Beautiful Mind, the 2001 film about his life.

Suna said he’d like to see wider distribution for A Conversation With…, an interview series featuring artists at the festival. “We’re seeing how we can package them for the public, maybe as cable programs. They’re looking for content and we have content.” Overall, he said, “The twentieth anniversary is a time to reflect and move forward.”

Asked to reflect on the direction of his own life, Suna said, “I still get to express myself creatively in my not-for-profit work, my community work and my photography.” Though he misses sculpting, Suna added, “I don’t really have regrets. I have a pretty good life. I don’t worry about things that much. I take care of things.”