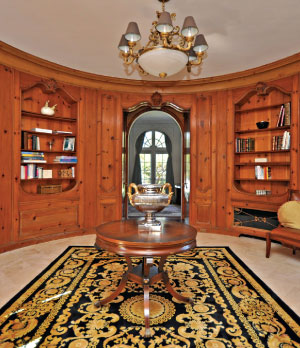 The village of Mill Neck, founded in 1925, is located in the Town of Oyster Bay and has a population of about 1,000. Mill Neck was originally part of the parcels of land purchased from the Matinecock Indians that became vast farmland for English and Dutch settlers during the colonial period. It is named after a now-demolished sawmill whose construction was spearheaded by key settler Henry Townsend in 1661. Mill Neck is part of LI’s Gold Coast, an area made famous by the vast estates built by wealthy industrialists in the 19th and 20th centuries. The village retains that cachet today and is considered one of the most expensive addresses in the US. Despite being 30 miles from New York City, there is plenty of pastoral open space, with the 60-acre Charles T. Church Nature Preserve, and the 400-acre Planting Fields Arboretum State Historic Park in bordering Oyster Bay.

Relive The Great Gatsby era in this majestic colonial home sitting on more than seven acres of formal gardens, rolling lawns and lush meadows. Modified by famous architect William Lawrence Bottomley in the 1920s, the main residence is a clapboard and brick manor home that is quintessentially Gold Coast. The interior contains fine details with handcrafted molding imported from a Parisian chateau, an expansive music room/ballroom, formal dining and living room, renovated kitchen with breakfast room and a beautiful master suite. A former Townsend estate, the property features a renovated three-bedroom cottage, six garages, a working greenhouse, in-ground pool and cabana equipped with bathrooms and dressing rooms, and European style gardens with marble walkways and patios with mature trees offering privacy and serenity.