The beach holds certain magic for Eric Fischl. It’s a special place between the water and the ground, a sensuous location where people behave differently, where they relax. “There’s something really profound about the beach environment,” Fischl said, discussing Beach Life, his themed retrospective on display through October 14 at Guild Hall in East Hampton. The exhibition, featuring an array of beach paintings spanning the artist’s 30-year career, looks at Fischl’s work through his longstanding attraction to the seashore.

Guild Hall curator Christina Mossaides Strassfield chose the beach to tie the paintings together and connect with the East End community, Fischl said, noting that the pieces represent one aspect of his work overall. “As an aspect, I think it’s very coherent,” he added.

A resident of North Haven on the East End, the internationally renowned painter said he’s always had a love for the beach. He lived in Port Washington as a boy and spent summers in Westhampton, where he took up surfing for a time in the 1960s. But more than his memories or simple terrestrial enjoyment of the sea and sand, Fischl, 64, said it is an existential and meditative place. “It’s a border state,” he said. “The water is where we came from and we can’t go back.”

Upon first viewing, Fischl’s paintings appear to be well-rendered scenes, usually with various people engaged in some sort of interesting narrative. Each one tells a story and over time, draws the viewer into the drama and psychology of its inhabitants. But what is not initially apparent is the skillful construction required for each picture. Fischl’s images are actually composites of many photographs taken during his daily life and travels. “It’s all about trying to find a compelling moment,” he said.

Describing his untitled piece (1990) featuring a nude white woman and a dark skinned native man, also nude, passing each other on the beach, Fischl pointed out that the woman was actually someone he photographed exiting a pizza place in Southern France. Something drew him to snap the picture that would later inspire his painting, though the reason was not clear. “I don’t question why, I just take their photograph,” he said. “I start with that as the premise.” From there, Fischl’s process on the canvas begins.

The artist looks at the way people carry themselves; their body language, not their beauty. After years of studying the human form and, more importantly, human beings, Fischl learned that a person’s posture or movement tells their story. He sees if people are uptight or comfortable, focused or unfocused, or how they might experience life. “You tell stories based on that,” Fischl said, explaining how he deftly and seamlessly arranges subjects and set pieces until a seductive or contemplative moment takes shape.

Fischl’s ability to paint a convincing scene is exemplified in “The Gang” (2006), a large oil featuring his wife, painter April Gornik, and a cheerful crowd of artist friends on a Hamptons beach. “Success is when people talk to me as if the people in the paintings are real,” he said. “The Gang” does depict real people, but Fischl photographed his friends separately and “restaged” them in an homage to classic pictures of Jackson Pollock, Willem de Kooning and their contemporaries on East End beaches. “‘The Gang’ is one of the first paintings I’ve done where everyone is smiling,” he added. 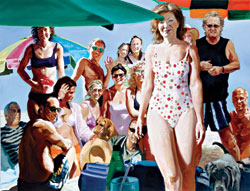 Most pieces in the show are culled from private collections on LI and museums, including “A Visit To / A Visit From / The Island” (1983), a striking 14-foot diptych borrowed from the Whitney Museum of American Art’s permanent collection. The painting shows two opposing beach scenes: On the left, a white family lounges and frolics in the clear blue waters of some island resort, while on the right side, Haitian boat people struggle onto the Miami shore with their sick and dead, the gray sky and turbulent surf behind them.

Fischl said the piece makes him jump back and forth from one side to the other. When looking at the white people at the resort, the artist said he craves “more authentic reality,” but the horrific and terrifying scene on the right leads him back to the pleasant and peaceful image on the left. Describing his state of mind, the painter said he exists somewhere in the middle of the piece.

The paintings in Beach Life fill the entire museum at Guild Hall and take visitors through a range of emotions. Fischl paints joyful groups and lonely souls. He paints naked people, not nudes and creates characters more than compositions, all while telling stories, playing with narrative and examining the human condition.