The morning of July 30, 2011, singer-songwriter Mick Hargreaves was called in to help fellow musician Joe Delia on a track called “Crystal Ball.” The tender ballad explores the futility of trying to predict the future. This idea was sadly proven true in a matter of hours. That night, following the successful debut of Mick Hargreaves & The King Guys at the Grey Horse Tavern in Bayport, a man wielding a crowbar viciously attacked Hargreaves in the parking lot.

“It is the place I didn’t die… It is a magical place,” is how Hargreaves, a man who chooses his words carefully, explained his desire to be interviewed at the Grey Horse. He continued with deadpan seriousness, “My doctors explained that usually the combination of a crowbar and someone’s head doesn’t end well.” Despite being hospitalized for nearly a week, incurring piles of bills and spending two months completely out of commission, Hargreaves returned to the scene of the assault, playing a gig here four months later. Perhaps more accurately, it is a place that represents a buzzing neon line that separates who he was and who he has become.

The backstory of the “ambush,” as Hargreaves describes it, was never fully chronicled in the press. Previous reports describe the assailant as a homeless man, making the assault appear completely random. This storyline never really jibed with the brutality of the crime or the nearly pastoral setting where it took place. And Hargreaves won’t say much about the details of the case, due to the evolving nature of the legal proceedings. But Hargreaves did say the only witness to the attack knew both him and his alleged attacker.

The vague and open-ended nature of the case left Hargreaves with some burning questions and a degree of unease, but the response of the music community and the psychological effects of the attack itself have left him grateful, amazed and transformed. Musicians gathered from Amagansett to Manhattan to hold benefits in his name. “I have so many people to thank,” he said about the healing power of art. 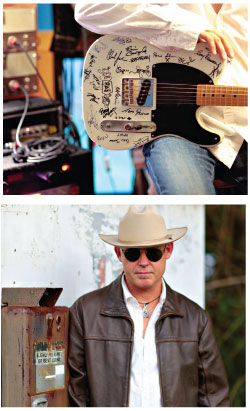 It wasn’t until college that Hargreaves first connected with the art that would give him both a steady career and, more recently, a medium for something resembling salvation. While on school break, Hargreaves picked up a classical guitar that was lying around his parents’ house in Miller Place. He began playing what he thought were cello runs on it (Hargreaves played cello in fifth and sixth grade) and realized he was knocking out some killer rock and roll bass lines. Hargreaves bought a bass, started writing songs and joined a band.

His boundless curiosity and wide-open ears allowed Hargreaves to wear many hats. He blossomed quickly as a songwriter and bass player. Whether Hargreaves’ chameleon-like voice is out front or in the background, his hard-boiled slice-of-life lyrics often provide the sharp and unifying edge to the groups he joins. “I always try to get to some sort of universal truth… It is not about me all the time,” he said.
Playing mostly Brit-influenced paisley pop music early on, Hargreaves’ sound has followed a loose arc toward all the sub-genres of roots music. His versatile bass playing is note perfect whether bubbling through a Kinks-like number or rambling through a rockabilly or country tune. As a passionate student of history and studio production in particular, Hargreaves often fills the role of engineer/producer. Whether it was The Grip Weeds (on the paisley side of things) or The Ghost Rockets (more down-home), all were tight units that consistently produced accessible hooks while avoiding ear-numbing slickness and the usual derivative froth. “I always gravitated toward people who can serve the song… The song is the boss,” he said. Hargreaves has toured both Europe and the US at different points in his career, playing gigs in a subterranean former jail in Germany and at a three-day party in the middle of Death Valley. Hargreaves cracked, “Since the ambush, I think I felt safer in Death Valley.

“I don’t really go out anymore… I am very careful after gigs,” he said. Hargreaves’ life may sound like it has become diminished or scaled back—yet nothing is further from the truth. He remains a producer and renowned hired-gun bass player, and started teaching children bass and guitar a few years back. He always loved teaching, but now finds himself in awe of his students. “They are just so honest and funny,” he said. It is as though Hargreaves’ senses are more acute and attuned to the deeper meaning of things. “I appreciate simple things like looking at a tree branch… It is amazing. What was important before, now seems frivolous. What was frivolous then, now seems important,” he said.

“I want to help people achieve something that has meaning to them,” Hargreaves added later. With a mobile production rig, he relishes finding the right room and developing a rapport with artists. “I don’t feel robbed of anything. I feel blessed.”

He and ace backing band The King Guys won’t record their debut album until later this year, but after hearing them play in the coveted opening slot of this year’s Great South Bay Music Festival it is clear—they are poised and ready. “I don’t think we have any borders,” Hargreaves said. With the core group of Gary Dawson and Mike Bifulco on guitars, Don Mangels on bass and Tom Ryan and Jeff McLary sharing drum duties, The King Guys are a unit that can inhabit the Kentucky-pickin’ to psychedelic rock spectrum that Hargreaves’ music encompasses. Despite using an expanded lineup for the festival gig, which included his sister Jen on backup vocals, the quietly evocative nature of Hargreaves’ songs remained fully intact—and surprisingly in-your-face. Two stirring examples were the dreamy harmonic-filled country tune “Stuck in the Stable Blues” and the irresistible R.E.M.-speckled power pop song “Always Come.” Hargreaves is a disarming presence as both frontman and ringleader. He welcomed the audience with, “I guess this is the happy hour crowd,” referring to his 5:30pm time slot.

The list goes on. Besides going full throttle with The King Guys, Hargreaves is a catalytic force in the New York Roots Music Association—a group that uses live performance to promote the legacy of influential artists from all musical genres. The East End resident will continue his custom of making art-house-like videos to accompany some of his songs. Hargreaves is finishing a solo record, Redemption Center II, which will be free to download as a way to say thanks to one and all. Perhaps most symbolic of his forward momentum, the Delia-Hargreaves penned “Crystal Ball” is destined for the soundtrack of the upcoming indie film Art = (Love)². At 40, Hargreaves is the quintessential survivor and the soundtrack to his own life is richer than ever.