In the clanging, churning, wheeling, whirling universe of the steampunk aesthetic, form and function follow each other in a clockwork dance of ingenuity and whimsy. Steampunk started as a literary subgenre that, over the last decade, has rapidly found its way into fine art, home furnishings, fashion and music. As an art form, steampunk is remote yet accessible, a sensibility that crosses all forms of expression—wherever the Victorian, the Gothic and the future might collide, where cogs and gears blend with dreams and fears.

Author, curator and lighting designer Art Donovan is the current ambassador of the steampunk movement. Donovan curated the world’s first major steampunk exhibit in 2009 at Oxford University’s Museum of the History of Science, and he published The Art of Steampunk in 2011. He has been watching the trajectory of his beloved art form with a blend of bemusement and pride, while remaining determined to keep a fresh approach to the aesthetic.

“Most steampunk enthusiasts, myself included, like ‘stuff,’ technical looking wizardry and weird looking things,” Donovan said one afternoon at his home studio in Southampton. “I try to bring something different to it. It was the only single thing where I could bring together all of my influences.”

When Donovan was working as a lighting designer in New York City during the 1990s, the steampunk thunderbolt hit him while exploring modern deco design and what he calls “mid-century modern.” In terms of approach, he was inspired by the blending of traditional looks and emerging contemporary styles. With his robust artistic curiosity intact, he began exploring the internet in search of works with similar ideologies at their core.

That’s when he encountered the work of Datamancer, whose custom computer keyboards—with their organic marriage of the antique and the futuristic—go a long way toward best defining steampunk.

“I flipped for [Datamancer’s work],” Donovan said. “I saw that you could take a love for the old classical forms and shapes and create something new if you apply them to something new. It was called ‘steampunk’ and I went absolutely nuts for it. My first thought was, what a great thing to bring into lighting.” 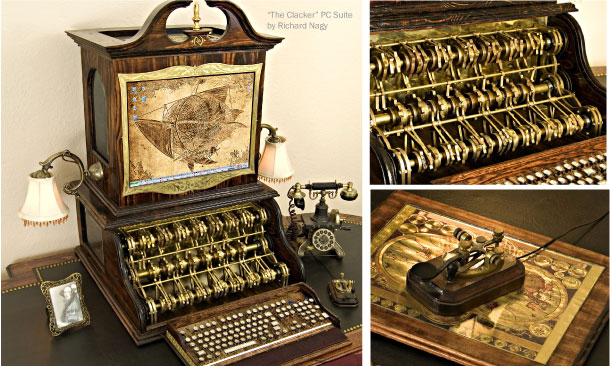 Datamancer is the pseudonym of Richard “Doc” Nagy, the accurately self-described “Grandfather of Steampunk,” who works out of his studio in California. As Donovan suggests, and Nagy confirms, the attraction to steampunk for artists and admirers alike is the tactile aspect. At its coal-fired core, steampunk is art with your sleeves rolled up and grime under your nails.

“Steampunk had been around for a while as an obscure literary aesthetic, but pretty much sat still for about fifteen or twenty years until people like myself and Jake von Slatt started doing computer and gadget modifications in a retro-Victorian style, which caught the attention of the blog-crazy tech crowd,” Nagy explained.

As the movement grew in popularity, Nagy observed a steady shift away from the function and fabrication-centric essence of steampunk to something that is more style than substance. 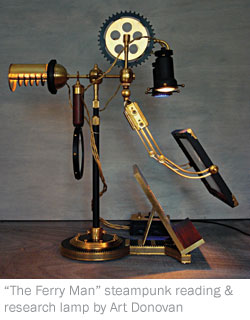 “Soon enough, the scene exploded and it brought in a ton of fresh faces who were enthusiastic, but focused more on the surface elements of steampunk, like costume play and conventions,” Nagy said, with more resignation than cynicism. “The core values of building, fabricating and function have been completely obscured in favor of steampunk cupcakes, costumes, prop devices and sci-fi conventions.”

There are as many levels to the steampunk discourse as there are to steampunk’s manifestation as an art form. The purists see it as a good idea spoiled, while the newcomers see it as something completely accessible and flexible. The prevailing notion is that steampunk is art you can touch, tinker with and transfer across genre lines. Ultimately, with its premium on the collision of process and result, steampunk does what all compelling art should do: It inspires thoughtfulness, creativity in others and the testing of limits and boundaries.

Jewelry designer Rich Sandomeno and his company Spragwerks (a steampunk word if there ever was one) is a prime example of an artist who is inspired by referencing steampunk elements while retaining originality and a different core vision.
Like Donovan, who relishes the opportunity to bring spirituality to the steampunk party, Sandomeno—a boat mechanic in Montauk years ago and a recent finalist on Lifetime’s Project Accessory—combines his Buddhist leanings, his love of nature and his fetish for all things mechanical to make pieces that are smooth and rugged, organic and industrial.

“I’ve been aware of steampunk for a long time,” Sandomeno said by phone from his studio in Los Angeles. “I knew of it before it even had a name. I love that period of time, late eighteen hundreds, early nineteen hundreds. First and foremost, I’m a mechanic by trade. I’m really into understanding how things work and I love repurposing stuff. Also the vaudevillian aspect and the carnie aspect, I love that stuff.”

Perhaps the biggest cross-cultural boost that steampunk has had to date comes from Rush. The legendary Canadian power trio has gone steampunk for their latest album Clockwork Angels, which debuted at #2 on the Billboard rock charts when it was released in mid-June.

To complement Geddy Lee and Alex Lifeson’s throwback, vintage Rush sound, drummer/lyricist Neil Peart has written a lyrical odyssey set in the “future as it ought to have been,” where a defiant, idealistic young hero makes his way through an overly regimented world of predestined precision inhabited by strict Big Brother clock makers, mischievous carnies and opportunistic pirates of fate to realize his dreams, his individuality and his destiny.

On his website, Peart interprets steampunk as, “a more romantic, idealistic reaction against the ‘cyberpunk’ futurists, with their scenarios of dehumanized, alienated, dystopian societies. I was thinking of steampunk’s definition as ‘The future as seen from the past’—as imagined by Jules Verne and H. G. Wells in the late nineteenth century.”

Fast forward to our contemporary, disposable, prepaid society, and steampunk can be understood as a refreshing backlash born of the value placed on true craftsmanship. Whether it’s a trippy lamp, a funky bracelet or a seven-minute prog-rock epic, anything that speaks of and to steampunk embraces that sublime combination of “the blacksmith and the artist.” It’s a form of expression that comes from and pushes toward the antiquated yet refreshing notion that things can be—and should be—built to last.

“I want to give my clients something that has an eternity to it,” Sandomeno says. “So in that sense, applying the steampunk aesthetic can work for anything. That’s why all those steamboats, trains, buildings and bridges are still around. Because they were made to last forever.” 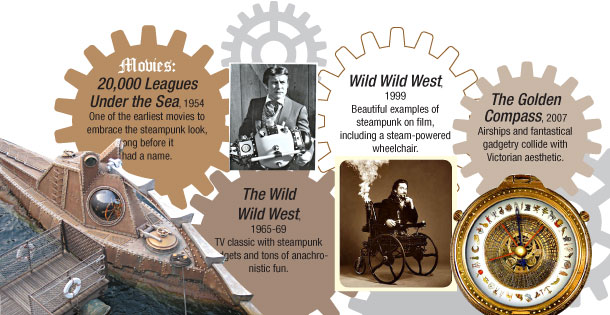 Movies:
20,000 Leagues Under the Sea, 1954
One of the earliest movies to embrace the steampunk look, long before it had a name.

Wild Wild West, 1999
Beautiful examples of steampunk on film, including a steam-powered wheelchair.