Their teams don’t go directly through one another, but fans of the New York Giants and New York Jets are always comparing and contrasting their favorites, and it always seems to be Super Bowl or bust. Relatively speaking, the recent stretch is as good as the metro area has seen, with two Super Bowl wins for Big Blue and appearances in the AFC title game for the Jets in 2009 and 2010.

This year, The Giants are after a repeat and have key personnel in place, while the Jets’ brash coach undoubtedly has his sights set on being more than just an also-ran. As they battle for headlines in the tabloids and on highlight shows, how do the two New York teams stack up against each other this year player for player, position for position?

Quarterback
One is a two-time Super Bowl MVP, the other is largely unproven at the professional level—and the latter has arguably the game’s most polarizing figure breathing down his neck. For the Giants, Eli Manning may not be considered among the game’s top two or three play-callers, but he’s got as much hardware or more than any of his peers, other than New England’s Tom Brady. He’s also thrown for more than 4,000 yards three straight seasons and nearly hit 5,000 last year. Jets fans’ patience is wearing thin with Mark Sanchez, and with the trade for Tim Tebow in the off-season, one has to wonder if a slow start will have them calling for Tebow, one of the most divisive players in NFL history. Sanchez threw for a career-high 3,474 yards in 2012, but he doesn’t look like a franchise quarterback and he certainly isn’t in Eli’s realm just yet.
Edge: Giants 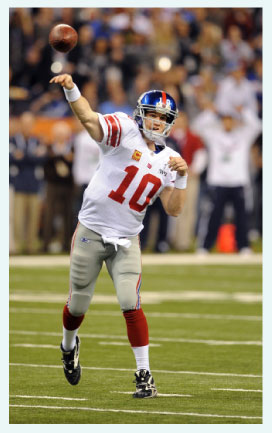 Running Backs
As long as Ahmad Bradshaw stays healthy, he’s a major factor out of the backfield as a rusher and receiver. He’s not a 20- to 25-carry type however, and with Brandon Jacobs now out in San Francisco, who steps in to complement Bradshaw? The Giants are hoping it’s David Wilson, their first-round pick out of Virginia Tech. Like Sanchez, the Jets faithful have been waiting for Shonn Greene to emerge as a feature back. Last year he was close, topping 1,000 yards for the first time. Without LaDainian Tomlinson, Greene must take his game a step further.
Edge: Push

Receivers
Each team suffered a major loss in free agency this spring as the Giants waved goodbye to Mario Manningham, who will team with Jacobs in San Fran. The Jets passed on Plaxico Burress. What’s left? Enough. Victor Cruz broke through from the slot and he’ll likely stay there with the selection of LSU’s Rueben Randle in the second round of the 2012 draft. Opposite him, Hakeem Nicks has strung together two 1,000-yard seasons. The Jets’ No. 1 receiver remains Santonio Holmes, and they too went with a wide receiver in the second round, nabbing Stephen Hill from Georgia Tech. Still, barring a Hill eruption or a major jump by tight end Dustin Keller, Sanchez doesn’t have much of an arsenal at his disposal.
Edge: Giants

Offensive Line
The Giants ranked last in the NFL in rushing yards a year ago, and they weren’t much better protecting Eli Manning, who was sacked 28 times. He was particularly under siege in their playoff win at San Francisco. The right side of guard Chris Snee and tackle David Diehl is their strength. The Jets’ Nick Mangold has twice been named first team All-Pro, and Freeport’s D’Brickashaw Ferguson has come into his own, making three Pro Bowls in six seasons. Sanchez didn’t have all day to throw, but he had enough to gain the edge here.
Edge: Jets

Defensive Line
The Giants defensive line is again one of the best in football, and the pressure it provided during the last two Super Bowl appearances made all the difference. Jason Pierre-Paul became a household name in 2011, recording 16.5 sacks, and Justin Tuck was a postseason force despite an injury that sidelined him most of the regular season. The Jets went with a pass rusher, North Carolina’s Quinton Coples, in the first round of this year’s draft for a reason. Last year’s defensive line was run on constantly and didn’t make opposing QBs uncomfortable.
Edge: Giants

Linebackers
When a team’s history boasts Lawrence Taylor, Carl Banks and Harry Carson, among others, Mathias Kiwanuka and Michael Boley have to do something special to get noticed. They were fine in 2011, with Boley ranking second in tackles and Kiwi showing he’s more than just a pass rusher. The Jets’ David Harris hasn’t yet matched his All-Pro form, but he’s still a top-flight middle linebacker, the perfect nucleus to Rex Ryan’s system. Calvin Pace and Bart Scott are formidable on the outside.
Edge: Jets 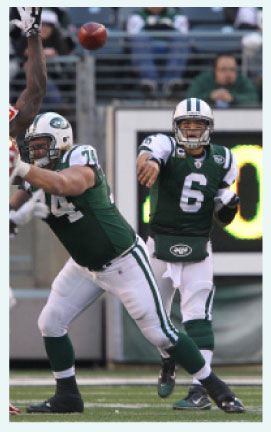 Secondary
In Darrelle Revis, the Jets don’t just have the best cornerback in football—they might very well have the game’s best pound-for-pound player. Revis’ prowess makes it easy to forget about Antonio Cromartie, a strong cornerback in his own right, and the addition of LaRon Landry helps at safety. The Giants gave up the fourth-most passing yards in the league last year. Corey Webster and second-year player Prince Amukamara aren’t bad, they just aren’t elite.
Edge: Jets

Special Teams
Joe McKnight was dynamite in the Jets return game, leading the NFL in yards per return with 31.6—no other player eclipsed 28.8. Devin Thomas was a serviceable returner, but Aaron Ross, the G-Men’s main returner on punts, signed in Jacksonville. The Giants’ Lawrence Tynes has made pressure kicks in the playoffs, including a 31-yarder in overtime to win the NFC championship last season. Still, neither he nor Nick Folk are guarantees.
Edge: Push

Giants Outlook
The schedule isn’t easy for the defending champs, with New England, Baltimore, Green Bay, New Orleans and San Francisco on tap along with the traditionally tough NFC East foes. Tom Coughlin is one of the best in the business, and with a top-five quarterback, weapons behind him and on the flank, as well as an elite pass rush, the Giants are in prime position to make another run.
Predicted 2012 record: 10-6

Jets Outlook
The novelty of Rex Ryan’s supremely confident statements has gotten old. Jets fans are clamoring to win a Super Bowl for the first time in nearly half a century. Sanchez has to make a massive leap forward for it to happen, and the Jets have to get back to the hard-nosed defense that was their trademark in two runs to the AFC championship game. Matched up with the AFC South and NFC West this year, the schedule is relatively light. A wild card bid seems likely.
Predicted 2012 record: 9-7