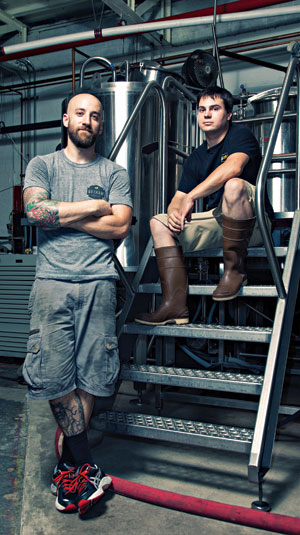 Brewery Dissection
“No Sleep Till Oceanside,” the quintessential craft banger from Barrier Brewing Company’s debut album, Licensed To Brew, details Evan Klein and Craig Frymark’s artisan-ill brewing philosophy, which includes micro batches, mad variety and an intimate relationship with clients and drinkers. Klein and Frymark, who beer-maked together at Sixpoint Craft Ales in Brooklyn perform 12-hour, quadruple-batch shifts on Monday, Wednesday and Friday, and also self-distribute to all accounts (three-fourths of their current distribution is west of Oceanside). The latter remains critical to their ethos as the duo’s demand and production increase.

“We love building and maintaining relationships with bar owners and people who drink our beer,” says Klein, who established Barrier Brewing Company in 2009. “It’s real important for us to put a face on everyone and make that connection.”

“Brewing with our schedule allows us to make four or five different beers at one time and constantly do something different,” adds Frymark. “I think people expect us to keep things fresh, and we want to maintain that standard.”
Word.

Expansion
Barrier Brewing Company’s new 4,600-square-foot facility, located 1.7 miles from its original 1,000-square-foot brewery, opened in June. It contains a five-barrel brewhouse (upgraded from its initial one-barrel, “pimped-out homebrew kit” system) and an opportunity to increase annual capacity from 18,600 to 46,500 gallons of beer.

Drink This. Seriously. Do it.
Selecting one beer to represent Barrier Brewing Company’s portfolio is an impossible task. The brewery abstains from flagships and strict availability schedules. “We like to drink stouts and porters during the summer, so we try to brew everything all year,” Klein says. “It gives us freedom to switch things up and make any beer whenever we want.” Barrier Brewing Company currently produces 43 beers, so, um, try Ruckus IPA, a grapefruit-bitter, all-Centennial IPA and the first creation from its new facility. Actually, consume them all. Actually, collect them all. Like Garbage Pail Kids. Sorta.