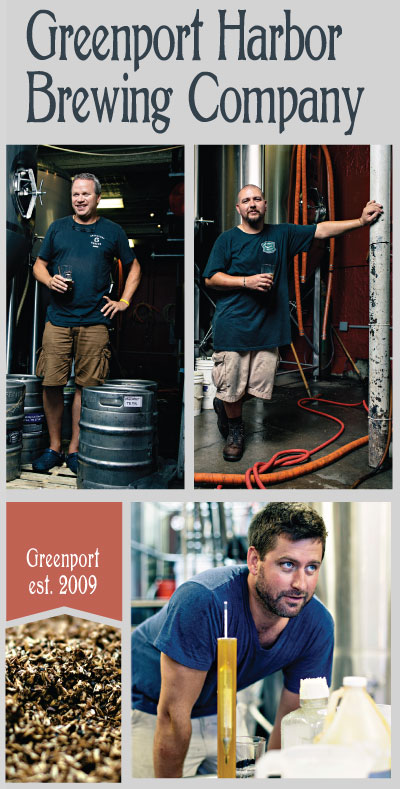 Brewery Dissection
Truth: Greenport Harbor Brewing Company was established in 2009 by John Liegey and Richard Vandenburgh. According to Liegey, the Greenport-based brewery, which operates from a former firehouse and brews Hopnami, a citrusy well-masked IIPA, is “looking for aesthetics in beer, not chasing trends and brewing contrived ideas.” Liegey also emphasizes Greenport Harbor Brewing Company’s desire to “stay creative and inspired through local culture.”

Maybe Truth: Greenport Harbor Brewing Company’s emblem, a Long Island-shaped whale, is my pet. We enjoy consuming a copious amount of Hopnami and reenacting scenes from Free Willy. Following aforementioned activities, I obsessively post poor-quality photographs of our adventures on Facebook every 40 seconds, like it was my not-that-cute newborn. Hate those people. Seriously. My whale is cuter than your six-month-old daughter. How do you feel now?

Expansion
If operating a brewery within an old firehouse adjacent to a Wild Bill Hickok-resembling jail wasn’t unconventional enough, Greenport Harbor Brewing Company is shifting its main production facility to a defunct Ford dealership in Peconic. According to Liegey, the property is a perfect fit for a brewery. “The coolest part about the building is there isn’t much structural work to do,” Liegey says. “We have a large display room and a big garage behind that for all the new equipment.” [new equipment = 30-barrel brewhouse]

“We’ll still use the old brewery as a test kitchen,” adds Greg Doroski, assistant brewer. “The new facility will prevent us from getting jammed up on our core beers and allow us to keep experimenting on stuff.” Though the current target for Peconic is Memorial Day-ish of 2013, Greenport Harbor Brewing Company hosted its third birfday at the 13,000-square-foot facility on July 21. The celebration included the release of Anniversary #3, a Belgian-style witbier.

Drink This. Seriously. Do it.
Project Hoppiness, an experimental series showcasing Greenport Harbor Brewing Company’s exploration of the Humulus lupulus (see: Hop). “As much as Black Duck Porter and Harbor Ale are our flagships, I think Project Hoppiness best reflects us and our experimental nature,” Doroski says. Greenport Harbor Brewing Company has released eight beers within Project Hoppiness since its debut in January 2011. Examples include Hoppy Stout, a West Coast-inspired mouth of roast and dank, and Citrus IPA, a light-bodied ale with orange, grapefruit and sweetbread.