The weekend starts in colonial Philadelphia with a virtuosic performance by the Philadelphia Orchestra and resolves with a foot tapping to a tattooed and pastied girl swinging in the oldest smoke-soaked go-go bar in town. Somewhere between that first symphonic note and that final rocking resolution lives this little city—a place where old meets new, where crass and class thrive, where grit sits amid beauty. In a city teeming with juxtaposition, I was fixed on discovering what makes this old charmer sing and dance, finding what songs the City of Brotherly Love has tied to its heart.

Most Americans know this country was born in Philadelphia when the Founding Fathers signed the Declaration of Independence more than 200 years ago. Some of that patriotic fervor and old-world charisma still lingers today. Just walk along any cobblestone avenue in downtown Philly or venture over to City Hall and you’ll step into a world from long ago, a world that was once imbued with powdered wigs, marching drums and trotting horses. Still, as I wandered through this highly walkable city, it was apparent there’s something else happening, something relevant and real, something new. I could see it in the thousands of stunning larger-than-life murals that canvas the façades of buildings, or along the crowded greenery of public parks and on the friendly faces that jabber away in local pubs, embracing the inherent beauty of their beloved city. That same passion and pride is still evident within this city’s distinct and variegated musical landscape. 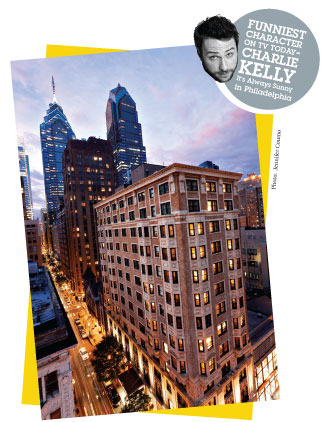 The first beat began with a matinee performance at the Kimmel Center by the world-renowned Philadelphia Orchestra. Best known for their collaboration on the Disney film Fantasia, this current collection of musical wunderkinds blasted through a series of 19th century compositions once orchestrated by the famed conductor Leopold Stokowski. In this massive theater with its glimmering chandelier above, there was an air of reverence for the past as each expert worked his instrument with affection and skill. And this musical prowess had the midafternoon crowd springing from their seats begging for an encore. I stepped out onto heaving pavement among low-rise buildings giving way to that sunny Philadelphia skyline, a trademark of this city.

With that slaking dose of orchestral elegance, I suddenly craved a transition—perhaps the soulful warmth and sophistication of American jazz? Who could dispute the long legacy of shining stars who emerged from this area? Including two of the genre’s biggest names: John Coltrane and Dizzy Gillespie. After pressing a few locals, I headed toward Time, a taproom in Center City.

The room was chic and low-lit with a circular bar enclosing a rack of craft beer and top shelf liquor. Seven days a week this place lights up with some of the nimblest fingerwork in the area. That night Time was filled with intent onlookers listening to every utterance this quartet articulated with their zigzagging syncopated melodies. The players’ expressions were jovial, loose, lost in the throes of ardor. Although there’s an obvious veneration for the traditional jazz idiom, there’s also this intriguing, blatant urgency to explore what’s fresh and exhilarating. The room was burning up and suddenly I had the impulse to join in and jump on stage, maybe hit a drum or two, but before I could, a lady in high heels climbed up to the bass player and gave him a big wet kiss on the lips. His face reddened as if it were the first time, and I knew after an instance of purity like that, my efforts would only seem contrived.

The next night I was off to the buzzing Johnny Brenda’s for an evening of independent-minded rock ‘n’ roll in the up-and-coming hipster haven, Fishtown. This relatively new gastro pub offers some of the finest craft beers and pub food around, and has already garnered a reputation as the “it” spot for fledgling artists. The dark yet inviting room with a balcony suspended over the stage was jammed and everyone seemed enthralled by the adventurous beats and heady guitar work. It’s comforting to witness musicians scripting something merely for the pleasure of making art and not giving in to commercial or social temptations. After the band’s final chord rang out, I hopped into a cab, feeling somewhat like a teenager, overjoyed to the point of embarrassment. I even bribed the driver with an additional 10 dollars to go as fast as he could so I could catch the final moments at the Theatre of Living Arts. 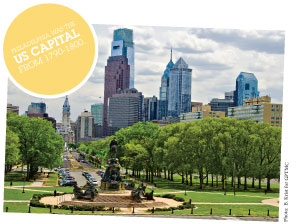 When I got there safely and paid my promise, it was immediately clear this was the spot in town. The theater houses up to 1,000 people while hosting some of the most important hip-hop and rock acts in the country (think The Roots or Arcade Fire). High ceilings and great acoustics draw a regular crowd, and there’s a sense that whatever is transpiring in this room is culturally vital, representing some of the most contemporary and intellectually embedded sounds around. The near-capacity crowd was 100 percent participatory, unabashedly singing every word and dancing with abandon to the band’s primal brassy rhythms. I paused to look at the audience, beers and glowsticks aplenty, and I realized Philadelphia is a true music town, full of color and imagination, complete with screaming contrasts, combining a vast range of styles, making it practically impossible to brand the city with a particular sound—it’s not just blues, jazz, rock, country or hip-hop. Instead, a medley of methods is blossoming here, and despite these divergent sensibilities, there’s a singular pervasive theme—it’s called good music.

To close out the night and wrap up the trip, I stopped at the Dolphin Tavern go-go bar. Throughout the weekend, I’d been informed by various Philly-ites to hit this very unique establishment before I left town. They said this place spoke for Philadelphia more than any other spot in the area, and apparently some of the after-hours music crowd would stagger in for a nightcap. Sure enough, it was wall-to-wall, a coed crowd ogling animated girls twirling their skin at the bar’s edge. Bring your Pall Malls to this David Lynch-like dive and expect to throw back some of the best drinks deals in town. With the harsh tones of punk rock blaring in the shadows, I began to wonder what our country’s Founding Fathers would think of the place. Would they pull up a stool today and ask for a Pabst Blue Ribbon and a shot of bottom-shelf tequila? I know I did. I let my foot catch the throb of that booming bass as the night dissolved into a wonderful off-colored note. 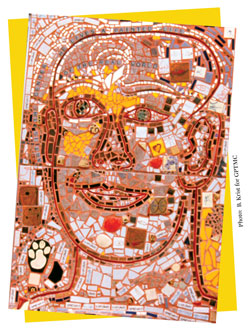 See
Check out the Philadelphia Art Museum, but not just for its vast and impressive art collection. If you have a few extra minutes, stand outside for a quick laugh as fellow tourists jog up and down the famous Rocky stairs and struggle toward those last steps of private glory.

Stay
Centrally located in Philadelphia is the exquisite and luxurious Latham Hotel. Built in 1907, this boutique beauty is steps away from everything that is Center City Philadelphia: Live music, bars, shopping, parks, historical landmarks. Recently remodeled, this modern accommodation provides all the amenities for the chic urban traveler while still embracing some of this area’s illustrious history. While there, try the new Urban Enoteca restaurant, the hotel’s hip wine bar. They have an extensive Mediterranean menu complete with small plates and specialty sandwiches.

Snack
Grab the best cheesesteak at Jim’s Steaks, located on South Street’s tourist strip. You might have to wait a while for your steak, but when that waft of onions hits, your patience will be rewarded.

Eat
It’s mandatory that you stop at the pan-Asian shared plate restaurant Sampan. Expect whimsical dishes with an Eastern flair, inspired by the adventurous palates of today’s culinary artists. Executive Chef Michael Schulson, a NY native, has brought some of his Big Apple expertise to Philadelphia, and by the looks of this regularly packed house, no one is complaining.

Do
The Mural Arts Program offers an affordable trolley tour through various parts of the city where you’ll view some of the most beautifully painted murals in America. A direct reaction to the city’s graffiti problem, these buildings are no longer canvases for teenage angst. Instead, their creative energies have been channeled into something constructive and aesthetically pleasing.