About a month ago Gordo Lisho helped me through Chicago. He insisted I see the city for what it really is. “Believe me, Chicago is all blues and jazz and nothing else,” he said. I believed every word, and at that moment I would’ve believed anything anyone said.

I’d always been interested in Chicago. The history, the notorious gangsters, the illustrious architecture, Wrigley Field, the robust theater and comedy district, and most of all (as an aspiring guitarist), that wonderful blues ache, a sound that’s rocked this city for the past sixty years. I remember spending endless hours as a teenager blasting through my blues records, dreaming of being in a room with that wild visceral sound. Well, I finally went. Perhaps it was whimsy or empty nest syndrome, or maybe I was just tired of breaking my own promise. I purchased a ticket and the next thing I knew I was landing in O’Hare Airport and hailing a cab to the Dana Hotel.

After checking in and dropping off my bags, I hit the pavement. Gordo was hovering outside the city’s famous Gino’s pizza place. I had been in town for only an hour when from nowhere this curious-looking man slid alongside me, step for step, as if he’d been with me all along. He had a big walrus mustache, ashy skin, a chicken leg frame and a sunflower poking out of his navy trench coat.

“Are you from around here?” I asked.

And with little more than a casual introduction, we were off, drifting together through the sparkling wide streets, the schizophrenic wind whipping past us through the rows of towering buildings. It felt as if there were a ghost that lurched and listened along every avenue. But the eerie breeze didn’t stifle the city’s warmth, as the sidewalks were crowded with smiling wayfarers and shoppers who are out and about all hours of the day.

We dove right into the swarm and hit the vast array of shops and restaurants of the popular Magnificent Mile along Michigan Avenue, Chicago’s version of Madison Avenue. I walked away with more bags than I am proud to admit. All that shopping built up a sizeable appetite so we ventured over to Giordano’s for a slice of signature Chicago deep-dish pizza. The pies take about a half hour to cook, but are worth the wait.

A short stroll away, Millennium Park was a respite from that shopper’s crawl. The manicured gardens, rows of trees and sculpted hedges surround the intriguing Crown Fountain, two 50-foot-tall video screens featuring images of Chicago citizens spouting water from their mouths. There was also the stunning outdoor Music Hall designed by world-renowned architect Frank Gehry. Each week this summer stage showcases a national act. Across from the stage, the smooth mirrored sculpture called Cloud Gate broke my reflection into a hundred variations. A crowd gathered here to witness the splendor of an object seemingly so simple in design. It wasn’t until I posed in front of the sculpture that the beauty revealed itself. 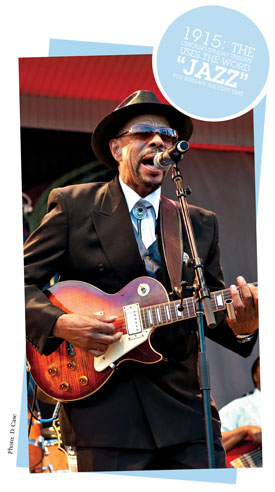 After an hour of wandering, we decided to take the well-known architectural boat tour. Packed with ambitious photographers and tourists alike, our cruiser snaked along the Chicago River through the city’s center. Ships rolled by like specters on a glass sea. We glide past some of the famous baroque buildings. These colossal configurations are testaments to the human imagination and, as Gordo put it, “It’s some of the best urban sky anywhere.” I couldn’t argue, and as the sun dropped behind the Willis (Sears) Tower, I wondered how much these surroundings had contributed to the iconic Chicago blues sound? There was the vast space, the suggestion of a phantom presence, the ornamental architecture and an appreciation for natural beauty. “Let’s go hear some music,” I said.

Inside the Green Mill Jazz Club, Al Capone’s old club on North Broadway, the amber lights were soft and the place was hushed as a baby. A thin songbird stood center stage swinging through a series of standards. She had blonde hair and a child’s eyes, and a voice of silk and sand from another time. Her dusty band, drabbed in shabby work clothes, paralleled each whimsical phrase this cherub bellowed into the audience. The crowd was fixed on every musical gesture, and as each new musician took the stage I got the sense of a real community, a place where artists want other artists to thrive. They would all shake hands as they walked off stage, as if they were best friends, encouraging each other to have a good show. The cutthroat competition of New York just doesn’t exist in Chicago. Musicians here seem content making beautiful sounds with each other, simple as that.

Later, Kingston Mines on North Halsted was mobbed. The walls of the city’s oldest blues spot appeared to whisper, as five men, gossamer and gray, reeled onto the stage as if they were on a conveyor belt—a saxophone, trumpet, clarinet, semi-hollow guitar and a bass. All at once they started into their instruments, unleashing howls from holy hell—rat-tat-hee-ho! Hee-ho-bee-sop! The room rocked to a syncopated slap. I recognized some of the melodies, many of which were derived from blues standards, but these players invested such raw enthusiasm into their instruments that the songs sounded entirely fresh. Even at their sloppier moments (and there were a few) a genuine earnestness overrode any misstep. I couldn’t believe these players weren’t world famous and that this level of musicianship doesn’t have a wider audience outside these small clubs.

Midnight, we ran out of the club onto the pavement under the neon light. The elevated train rumbled in the distance. A little boy with floppy ears ran ahead of us laughing into his hands and then hopped into a pink cab. Gordo walked me back to the Dana Hotel and we agreed to meet the next day.

The next afternoon we rolled over to Al’s Beef on West Ontario Street to lunch on a Chicago-style hot dog and Al’s famous beef sandwich. The hot dog was delicious, fully dressed with mustard and onions on a poppy seed roll (no ketchup here). And the “Depression Era” beef sandwich came topped with juicy peppers and spices. After a quick second round, we walked toward where the South Loop area meets Michigan Avenue to peruse a host of art galleries. Chicago is easily on par with the New York art scene, especially the Richard Gray Gallery and Valerie Carberry Gallery. What’s notable about these galleries is the casual, inviting air gracing the spaces.

After ogling the afternoon away we tumbled into Pops on North State Street. We sat down to some shared plates of lamb loin, smoked Scottish fish and a few glasses of champagne. The prices were steep but the ambiance was exquisite. It’s as if everyone came direct from a fashion runway. The people-watching was as pleasurable as the champagne, but I could hear the music calling again. 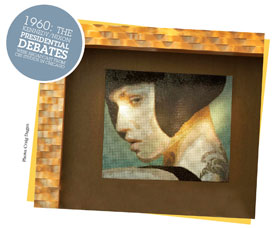 Next up was Blue Chicago near the River North area on North Clark Street. This place is small but the prices are the best in town. We were told to get there early because this charming “run-down” room gets crowded almost every night. When we arrived the place was writhing with local blues lovers, but the tight fit didn’t thwart us from getting a drink. The band took the tiny stage and we waited as the crowd hushed over. A big woman swaddled in a purple dress and monster-eye earrings stepped up to the microphone and just like that lightning flew from her mouth as her band attacked their instruments. The place was buzzing. It was as if the room was transferred back in time to the 1950s. People let go in Chicago. They’re vulnerable here and not worried about “fitting in” with what is socially acceptable. Get drunk and swing to that 8-bar blues progression and worry about it in the morning when you’re nursing a noxious Bourbon headache. “I should move here, Gordo.” But Gordo was bee-lining for the front of the room to join a mix of people shaking to this purple lady’s carnal wail.

An hour before last call, Buddy Guy’s Legends on South Wabash had a different vibe, something a little more raucous and drunk. We stood amid a spring of feverish evangelists, dancing in sweaty shirts, throwing fists into the air. A certain spark scraped inside this crowd’s veins and electricity riddled their expressions. A man who could barely stand edged his way onstage; it looked like smoke lifted from his ears. He strapped on his guitar, ripping into his strings as he shouted into the microphone, “My baby left me! My baby left me for the devil!” The crowd hailed at his anguish. His authenticity was unmatchable. If you’re looking for blues, this is the city for it. The people are as real as their music. There are no contrivances or gimmicks. They sling their souls around on stage and the audience simply responds to their passion.

“Why the hell did I wait so long to do this, Gordo?” I yelled, but Gordo was gone. I looked in the crowd in front of the stage, at the bar, in the back by the restrooms, but I couldn’t find him. I asked the bouncer at the front door if he saw the man I was with leave. He shrugged and said, “You came in alone.”

I floated out onto the sidewalk. The wind blew my hair across my face and I heard the rumble of the ‘L.’ I remembered what Gordo said when he first appeared: “Believe me, Chicago is all blues and jazz and nothing else.” At the time, I believed his every word. And he wasn’t wrong. Chicago is certainly blues and jazz, but it’s also art and architecture, it’s open spaces, deep dish pizza, hot dogs, friendly faces and, most of all, it’s strangers like Gordo.

Things to Do | Places to See

Dana Hotel and Spa
Nestled within the lively streets of Chicago, this 216-room luxury boutique hotel is a genuine refuge amid its surroundings. Overall décor is chic yet cozy, composed mainly of warm terrestrial tones. The hotel has an elegant penthouse lounge, top-chef dining, a superb spa and fitness center, floor-to-ceiling windows, spa-motivated showers, blackout shades and every other amenity one would expect in modern luxury lodging. The staff is genial, accommodating and tastefully out of the way. The location is this diamond’s shining attribute, as it’s in the mix of all things Chicago: The Loop Theatre District, shopping on the famed Magnificent Mile, a slew of restaurants and cafés, art galleries of River North and the Merchandise Mart, the sparkling Chicago River and much more.

Mercadito
Fine dining Mexican-style, this New York export serves up signature small plates, which inspire sharing ideal for group dining. Expect big, loud crowds in a club-like atmosphere, while savory tacos, pitch perfect ceviche and an array of distinct tapas prep you for top shelf margaritas. Leave room for dessert, as the flan might be their best dish.

Shaw’s Crab House
This oyster bar is the big noise in town because it has the freshest seafood around. Shaw’s is known for its over-the-top Alaskan king crab and oysters among a vast range of oceanic delights, from sushi to fried calamari and surf & turf. For added comfort, the waitstaff is among the elite: Patient, attentive and extremely knowledgeable.