Perhaps Ethiopia’s status as the birthplace (origin) of the energy drink has had some impact on their mobility/wandering nature. Yielding humanity’s oldest traces provided ample time to concoct a few fads, including one that hasn’t faded. Sometime after the sacking of Rome and before Europe slipped into the darkest of its Dark Ages, coffee was discovered in Ethiopia.

Caffeinated storytellers say it goes something like this: A wise herder named Kaldi noted that his goats became hyped up after chewing specific plant leaves and berries, so he munched on some and caught a buzz. After sharing this discovery with a nearby monastery, Kaldi was scolded “for partaking in the fruit of the devil.” That is until the monks whiffed the splendid aroma emanating from the fire from where they’d pitched the devil’s brew. Monks then began drying coffee beans and shipping them to other Ethiopian monasteries. Upon receipt, they rehydrated the beans in water, ate the fruit and drank the brew, which they discovered helped them stay chipper for nocturnal prayers. Soon after, Arabs began importing beans and the coffee business launched. Fifteenth century Turks invented the modern style of brewing and stamped an adaptation of the Kaffa province’s name on it: “kahve”. 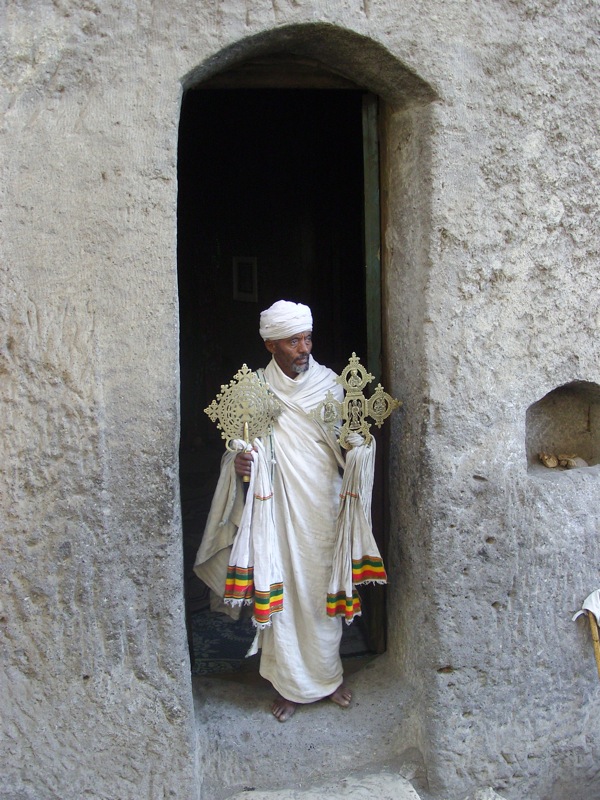 Whereas American coffee joints prey on creamy consumerism and wirelessness, Ethiopia’s coffee houses are about socializing. Coffee (buna) is also vital at home and honored with its own ritual. The coffee ceremony showcases Ethiopia’s welcoming nature. An invite extends a hand of friendship, requiring about as much time as it takes to enjoy an American barbeque. The ceremony begins with freshly cut grass scattered on the floor to share nature’s bouquet (and conjure up memories of cutting the lawn to earn your allowance). An incense burner smokes with an aromatic gum while the hosting brewmaster sits on a low stool before a mini charcoal stove. As coffee beans roast in a pan, everyone is invited to draw the smoke their way, inhale, and then rejoice with an aroma exclaim, either borrowing a fancy wine connoisseur idiom or simply “mmm.”

The roasted beans are then ground with a pestle and mortar, brewed, and served in petite china cups—heavy on the sugar. Traditionally, three cups are served; the third bestowing a blessing. Popcorn usually makes a showing at this core of Ethiopian sociology where organic conversation trumps all modern communication mediums—high time for the sort of womanly conversing that’s typical in salons.

Enjoying another energy drink, ferengi (white people) like to tie one on by drinking honey wine in the country’s numerous tej bars. We can’t survive on beverages alone. The national staple is teff, the main grain ingredient in a nutritious, moist–spongy pancake–like bread that doubles as both utensil and plate—menu items parked atop this old world pizza are clutched and consumed with torn off pieces. During these traditional, earthbound mealtimes I kept peeking around for the beanbag chairs. 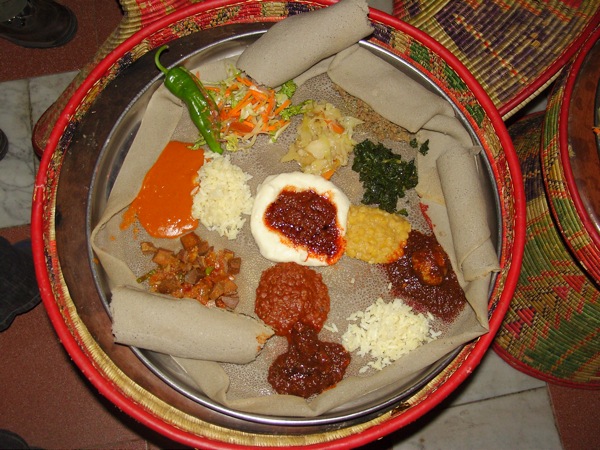 Ethiopians are caffeinated without the agitation—I didn’t spot one Homo Coffee–addictus in the land that produced the first energy drink. Ethiopians define mellow and gracious in a land of heavenly visions. Churches, markets, smiles, and biological anthropology reveal a dateline of pioneering while Ethiopia tutors us on simply enjoying a moment. The allure of many African countries is game preserves. Ethiopia’s not a place to behold the “big five animals,” yet it boasts eight World Heritage Sites. Their ancient sense of style means that accidental models stroll along every bend in the road. 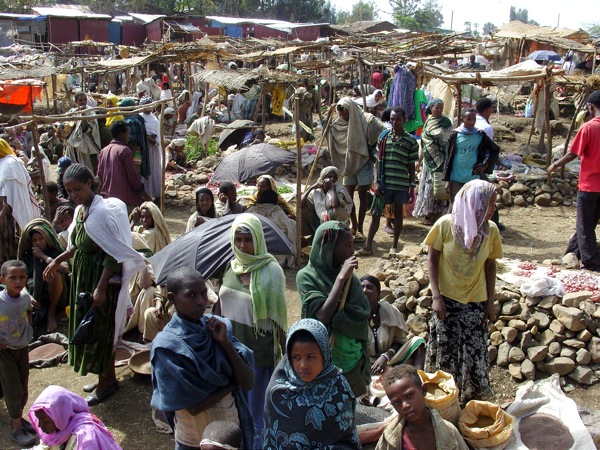