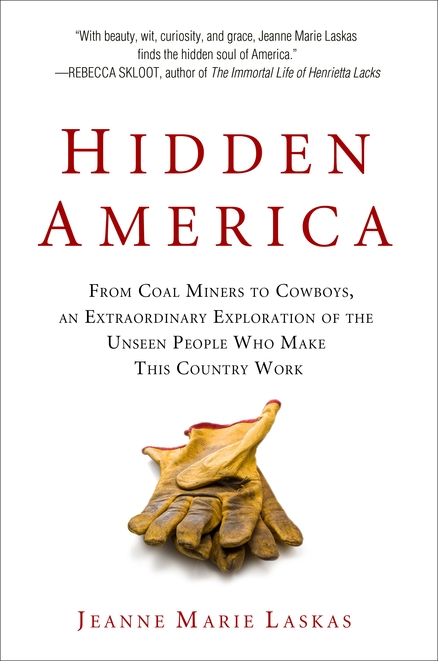 It gets dark earlier now, which means you reach for the lights earlier, too.

One click and you can see to read, cook, find your keys or avoid tripping over the cat. Chances are, in fact, turning on the lights is so automatic, you can find the switch without even thinking about it.

But think about this: who makes sure you have lights in the first place? The energy company? Think again, then read the new book “Hidden America ” by Jeanne Marie Laskas.

Not-quite-standing in a mine shaft 500 feet beneath Ohio, Jeanne Marie Laskas had two epiphanies.

First, “Dude, this is ridiculous.” Then: her daily life was dependent on people like those miners. Without them – and their work in a $27 billion industry – there would be no electricity. How come she didn’t know that?

Humiliated, she decided to go in search of the people who make sure we have food, that it gets to the supermarket near our homes, and that our scraps disappear when we’re done. These are people, she says, “who, were they to walk off the job tomorrow, would bring life as we know it to a halt.”

Coal, for instance, gives America half its electricity and is the “fastest-growing energy source on the planet…” But getting it isn’t for the faint of heart: miners often spend half their lives in darkness, sometimes in a constant-crouch position. Yes, they make good money, but the always-shifting, groaning planet makes the paycheck dearer.

“Most of the people who pick our food have brown skin,” Laskas learned at a migrant camp in Maine. Once upon a time, locals did the work, but not any more.

In New Jersey , Laskas spent time in a frantic air traffic control room, where she found a lack of technology and a feud between government and unions. She followed cowboys in Texas and learned that ranching has gone high-tech and that “designer” bulls make our meals tastier. She bought a gun in Arizona , went cross-country with an African-American female semi-driver, and took a ride in a Bomag over mounds of trash in California.

And in Alaska , while living on a man-made “island” in negative-38 degree weather, Laskas learned that total isolation is never total and that precognition can bring shivers quicker than can ice…

Oh, how I loved this book!

But there was one thing that made me scratch my head: Cheerleaders.

Seriously? They “make this country work”?

Still, I think that if you’ve ever used electricity, drank from a plastic bottle, eaten, dressed, flown, shopped or, yeah, even watched the NFL, this book needs to be at the top of your to-read pile. For you, “Hidden America” sheds a lot of light.