When the award-winning Four Seasons Resort Marrakech opened, the design world was buzzing about the interiors. It has a refreshingly clean and modern palette punched up with lots of delicious details—gorgeous tiles, jewel-toned paint hues and artisan crafted lanterns—that caused many of us to fall in love with Morocco.

Moroccan-inspired design has had quite the impact here in the states for some time now, thanks in part to fashion designers Yves Saint Laurent, Giorgio Armani and Christian Lacroix, who all introduced it into their lines a few years back. It seemed to further permeate pop culture more recently after the cast of a certain movie sequel took their cosmopolitan-loving selves to the country. Regardless of its origins, it is clear that Moroccan-influenced design is here to stay. Luckily, it has become easier than ever for the average homeowners to incorporate it into their homes.

“Unless you were living in a metropolitan city and had a large budget, it was very hard and quite expensive to source such exotic elements,” says Long Island-based interior designer Deborah Martin of Deborah Martin Designs. “Lately, I have seen it emerging into the mass-market with more mainstream offerings. Catalogues, stores and manufacturers such as Wisteria, VivaTerra, Pier 1 and Century Furniture are making it much more accessible. Even ABC Carpet & Home, an earlier adopter of the look, is transforming their entire first floor this year to resemble a Moroccan bazaar, filled with handcrafted rugs and textiles.”

This mass reach is making it much easier to bring this look home, but where do you begin?

According to Martin, there are several iconic elements that make up this east-meets-west vibe. Color, of course, is at the top of the list. 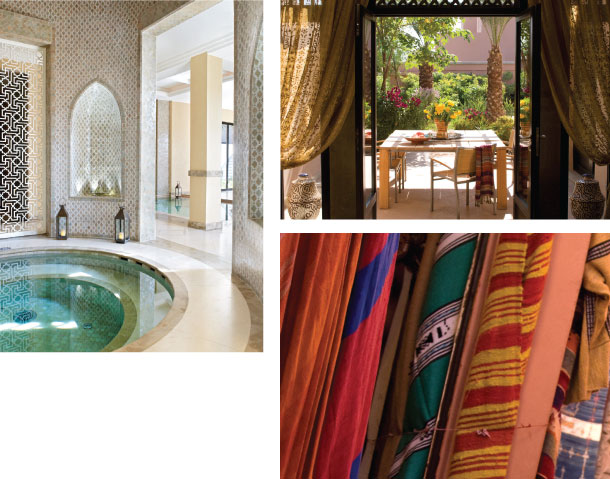 “Color is the single most important focal point in the home and is also perhaps the least expensive way to introduce a new trend into your existing style, especially with paint,” she explains. “Moroccan interiors have an earthy color palette inspired by its geographical location, with names that seem to be right off of the spice rack, such as curry, saffron, cinnamon and paprika. These are often mixed with cooler shades, such as blues and greens that are reflective of the waters surrounding the Mediterranean.”

Contrasting textures and colors are also at the heart of this aesthetic. “Wall coverings, fabrics and hand-woven rugs are all items that can bring this look and feel at home,” explains Martin. “Bold, geometric patterned textiles are prevalent, especially when it comes to throw pillows, floor cushions and poufs (leather ottomans) which are all used quite often as low-set sofas. Since it’s so hot there, eating and drinking on the floor is appealing since it’s much cooler.”

Other details to look for include inlaid wood and mother of pearl, intricate wood carvings, pierced metal lamps and lanterns, and, of course, candles, which are traditionally used and very affordable. What you won’t find is artwork reflecting the human body. 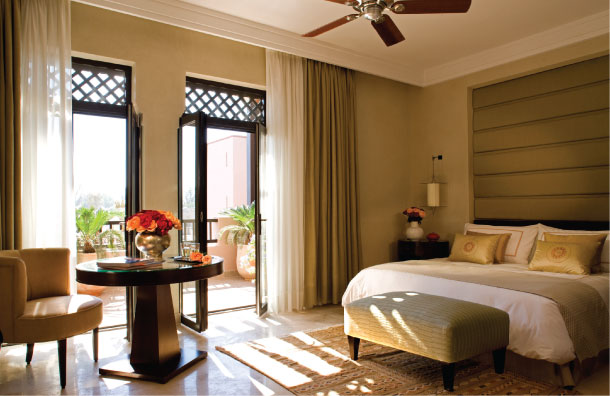 “This area of the world is highly populated with Muslims,” she explains. “Their culture frowns upon using the human form in art. Therefore artists create abstracts from inspirations in nature, such as trees, flowers, night sky.”

To really make this look work at home, Martin suggests focusing on accessories (an essential element) in bold and highly saturated color, which is a cornerstone of Moroccan culture, as the talismans in that region turn to such colors to help ward off evil spirits. By incorporating a few accessories slowly, you’ll be better able to manage it against your existing style.

If you’re more modern, think about blending warm wood finishes with colorful textiles and introducing one or two accent pieces, such as graphic wallpaper and a curvy upholstered headboard, or one made of carved or laser-cut wood.

“The fun part about this look is that there really are no guidelines,” she says. “It’s so new, so the rules have not been rigidly set, opening it up to personal interpretation. You can mix and match from, say, Pier 1, with more high-end items to get the look you are craving.”