As a triathlete, Michael Esposito knows the physical grind of a long race: The focus, determination and tenacity to keep going. The 45-year-old Seaford native sticks to a strict daily regimen of running and biking, and swims several times a week. The plan keeps him fit in body and mind. And that mental fitness came in handy this summer at the World Series of Poker.

After a week’s worth of play at the Rio Hotel and Casino in July, Esposito found himself among the final nine players remaining in the $10,000 No Limit Hold ‘em Main Event. The tournament is poker’s biggest event and requires near perfection and a little bit of luck to make it through more than 6,800 players. Players will return to Las Vegas in late October to play the final table for the $8.5 million first prize and the coveted gold bracelet, considered the biggest trophy in the poker world. Esposito sits sixth in chips at 16.26 million.

As an average kid on Long Island, Esposito grew up playing cards and board games.

“I used to always play card games when I was a kid. My grandmother was very sick. She was in the hospital a lot. So a lot of times I would go in and play with her,” he says. “And when I spent time with my grandparents, we would play card games like Rummy and Crazy Eights and other games of that nature. I was always playing games like that and then as I got older I started playing a little bit of poker with different friends.

“When I was 19 years old, I started playing with a lot of older guys. I was the youngest player in the game. Pretty much early on I could hold my own in the game. It was one of those games that started out very friendly, and then every game seemed to escalate until it was a bigger game.”

During these early years, the stakes were small, anywhere between $.50 and $1.50 and then grew to between one and four dollars. He enjoyed poker and found he had a knack for it. The games were mostly Five-Card Draw and Five-Card Stud.

Esposito continued playing poker in the coming years as he embarked on his career as a commodities broker. He still lives on Long Island while balancing a career on Wall Street and making the occasional trip to Las Vegas or Atlantic City for a major poker tournament. In the early-2000s, Esposito enjoyed playing Seven-Card Stud, but transitioned to poker as No Limit Texas Hold ‘em became more popular. And while he is not a poker pro, this poker-playing broker has found considerable success through the years, reaching the money in several tournaments including some nice five-digit scores. That tally includes finishing 540th for $22,266 in 2006 in the same event in which he has now made the final table.

This year, his plan was to stay completely focused the whole tournament. Despite his Vegas surroundings, he kept his usual workout routine by biking or swimming each morning before playing. 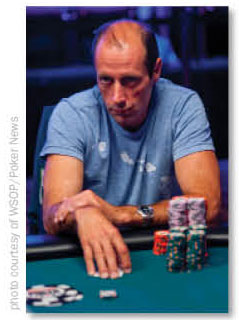 Often in big-stakes tournament poker, one hand can make the difference between getting a major chip stake and taking command in a tournament or getting eliminated. Esposito says he had several of these including, “One hand where I had Aces in a multiple-player pot. I was getting ready to throw away the Aces based on the fact that there were five players in the pot. Then one player shoved all-in with Queens and I called, which worked out nicely. That was a big hand.”

Throughout the tournament, friends and family texted and called him for updates and his whole company followed his progress online. And while Esposito doesn’t have a lucky charm, he stopped a routine that seemed to be bringing him bad luck.

“In the beginning I was texting everyone my chip counts, but it seemed every time I texted someone I would go back and lose 50,000,” he says. “So I stopped texting anyone my chip counts. I would just say I’m doing okay. I don’t know if it was bad luck, but it just kept happening.”

Because the final players have already made at least ninth place, Esposito has already pocketed over $750,000. He has no big plans for the money beyond taking a vacation in the Bahamas with his daughter. The remaining winnings will go toward retirement. While other players may be seeking out poker coaching and playing numerous tournaments to sharpen their games, Esposito’s only plan for the final table is to stay focused and play his game.
“I do a lot of triathlon races and I have a few of those that I’m doing. Pretty much I’ve been training for that,” he says. “I’ve got a couple races coming up, I’m going to travel a little bit for business, and I may play one poker event before I go play in October.”

The final table will be a family affair for the Long Islander as ESPN cameras film the action.

“I’ve got a lot of friends and family coming out. I probably have about 35 to 40 people coming. It’ll make for a fun day. My son is coming, my mother’s coming, my girlfriend, my aunt and uncle, my sister, and a bunch of friends. It will be exciting.”

And winning the millions would certainly add to the excitement. If he can deal with the pressure and play his cards right, Esposito could be the next WSOP champion. How does the stress compare to his day job?
“Being a broker is a lot more relaxing some days than being at the poker table.”