There are clubs within clubs, specialists among the established elite. New York Giants long-snapper and special teams captain Zak DeOssie, a fourth-round draft choice in 2007, belongs to several of these clubs: Andover Academy graduates in the National Football League, Ivy League graduates in the NFL, sons of former NFL players in the NFL and guys with two Super Bowl rings and two Pro Bowl appearances.

Clearly, a lot has gone right in the five years since the lean 6-foot-4, 251-pound DeOssie graduated as an All-Ivy linebacker from Brown University. He and his ex-Giant father Steve—who also played for the Cowboys, Jets and Patriots—are the only father-son duo to ever win Super Bowls with the same franchise.

“The New England Patriot head coach Bill Belichick is from Andover,” DeOssie says. “I think we’re the only two Andover grads in the NFL. It’s not as rare to see someone from the Ivy League.”

As a teen, DeOssie lived in North Andover, Massachusetts, and was a day student at the prestigious prep school. “The hardest thing I ever did,” he says of Andover. “Very much worth it.” He also spent two seasons as a Patriots ball boy, setting his New England roots even deeper. 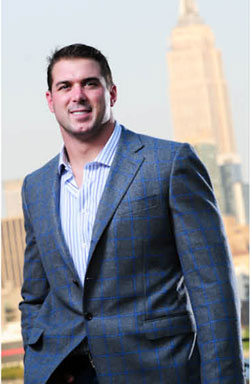 DeOssie admits he is (what is affectionately known in New England as) a “Masshole.” “I love the Boston sports teams, the Celtics and the Bruins and the Red Sox, and I loved my time at Brown,” DeOssie says. “Coach Phil Estes is terrific, and we won an Ivy League championship and got to celebrate it on Columbia’s field in New York.” DeOssie also notes the importance of his academics at Brown. “I got a great education that will allow me to pursue a career in finance when I’m finished with football.”

The world of finance will have to wait, as DeOssie recently signed a multi-year deal with the Giants. “I’d like them to be the only team I play for. I really like the coaches and the guys on the team, and the fans are great. I enjoy New England and Boston, but when I’m finished with pro football I think I want to stay in New York.”

DeOssie says his world champion status really hit him during the ticker tape parade through the Wall Street canyons. “We had our own float as specialists, so I was with Steve Weatherford and Lawrence Tynes following this high school band. We jumped off the float and I borrowed a trombone and the other guys borrowed drums and we marched our way to City Hall, celebrating with our fans. The only comparable rush I know was the kickoff a few days earlier.”

Every year a new crop of contenders (and pretenders) arrives at NFL training camps looking for DeOssie’s job, the life he lives and loves. He holds them off with hard work and experience, to live the dream another year. Monday is legs day and running. DeOssie follows the linebacker protocol of agility drills, bag drills and long sprints called “gassers.” Then he puts on his helmet and shoulder pads and fires 100 short field goal snaps off a small black “X” on a blocking pad. “It’s important to wear my gear when I practice because it changes the angles and mobility of my arms. I always snap the way I do in games to mitigate bad habits,” DeOssie says, adding, “As a professional, I’ve learned you have to work all the time to reach your best levels. You can’t stop and start. We practice the timing of these plays hundreds of times a week during the season.” DeOssie, who loves to fly down the field with abandon in punt coverage, led the NFL long-snappers with 10 solo tackles in 2011.

In his spare time DeOssie is the Giants’ representative to the NFL Players Association. He and his wife, Kate Hammond DeOssie, live in Hoboken and he remains close with his father. “My dad and I are very competitive when we play golf against each other—joking, saying new things to get inside each other’s heads. One of the biggest characteristics I inherited from him was his ferocious appetite for competition. Golf, basketball, skiing, we’d compete at everything. When I got my second ring I told my dad, ‘Two rings to your one, pop,’ and he said, ‘No, Zak, that’s three rings for the DeOssies.’”