“I think there’s a certain world weariness after having experienced New York for almost a decade,” Brian Harding said of his new songs. “You start to see things a little differently. You lose the rose colored glasses.” A veteran of the NYC music scene, Harding has certainly paid his dues. The proof is in his music.

After two critically acclaimed albums and several national tours, his roots-rock band Hymns called it quits. Like so many other promising NYC bands, they found it’s hard to survive in a city grossly over-saturated with music. Harding expressed this frustration and disconnect lyrically on Hymns’ 2008 album Travel in Herds: “And I don’t remember nothing/And I don’t remember what you said/And it all becomes fashion/A pretty little thing in your head.” The frontman’s new project, Ex Cops, ditches the more rootsy elements of his former band in favor of a breezy, minimalist sound. 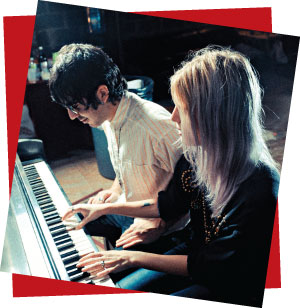 Long before Ex Cops hit the scene, Hymns released their first album, Brother/Sister with Blackland Records. The album showcased the band’s varied influences and Harding’s infectious songwriting. It was a huge critical success, and the group found themselves supporting some very notable acts after its release. “Touring with [singer-songwriter] Daniel Johnston was a really intense experience. Really pushed me to write differently and stay alert,” Harding said.

Shortly after Hymns’ breakup, Harding formed Ex Cops and quickly got to work recording. He enlisted the help of guitarist Kai Kennedy, drummer Leif Huckman and bassist Sam Bair of Locksley, as well as vocalist Amalie Bruun. The resulting White Women EP showcased Harding’s new musical direction. The songs were more abstract, but they still retained the signature melodies that made Hymns records so memorable. “This whole thing started in a bedroom a year ago—really lo-fi stuff. We wanted to retain some of that charm on the new record, but this has been done in a proper studio with gear that I can’t pronounce, and it’s sounding really great.” The song “Broken Chinese Chairs” is a perfect example of Harding’s trademark sense of melody with high falsetto vocals and washy reverb. The spaced out “Spring Break (Birthday Song)” features an incredibly catchy tagline chorus sung by Bruun. The lyrics also play a crucial role in Harding’s songwriting. “Lyrics are hard to talk about, and I’m still in the position of viewing them as a sort of chore, but this is the first time I’ve tried to write stuff that means something,” Harding said.

Ex Cops signed with downtown record shop Other Music to distribute their as yet untitled debut full-length album. “Other Music, the best record store, I think, has started a label with Fat Possum. We’re the first release. I can’t believe that I’m involved with it. I remember going there when I was 15 and buying records,” Harding, now 30, mused. He’s witnessed big changes in the New York scene, but manages to remain hopeful for the future of music as a whole. “I think New York is about to get really good again, I hope. It seems to be a ten-year thing. The last big hit was 99-2001. That’s one of the reasons I moved here.” With many of the “the” bands from the early 2000s garage rock revival now headlining stadiums across the country, Harding is hopeful for the city’s next big wave of art. “I think it’s the most exciting time to be in the music industry. It’s forcing people to be creative and innovative.”