It is commonly regarded as a bad sign when a movie has a tortured history and is dumped into theaters without even having press screenings for critics. However, common wisdom can be wrong. One of the best new movies I’ve seen all year was filmed in 2005, and dropped into a handful of theaters in 2011 with minimal advertising support. The situation is particularly shocking because this is not some micro-budget flick with a no-name cast and director, but instead a prestigious film with numerous stars directed by the creator of a much-beloved hit movie.

Problems began when they started editing. Lonergan’s contract required him to deliver a finished film that was no longer than 150 minutes. However, he found it difficult to squeeze his multi-character epic down to the requisite length. Numerous versions were created, including one edited with the help of Martin Scorsese. After six years of editing, fights and lawsuits, Lonergan finally got the film down to the requisite length, and Fox Searchlight gave the film a perfunctory release. Margaret seemed destined to disappear into the dustbin of cinema until a fan started an online drive to get the film back into theaters. It was only a few extra weeks but that was long enough for the film to develop a passionate following that refused to let it drift into oblivion. 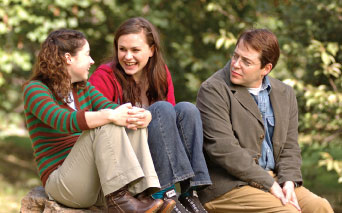 Margaret tells the story of Lisa Cohen (Paquin), a scholarship student at a private school on Manhattan’s posh Upper West Side, who lives with her divorced mother and brother. Lisa’s teenage angst is transformed into deeper emotional turmoil when she unwittingly plays a role in causing a horrifying bus accident that leaves a woman bleeding to death in her arms. Lisa responds to this tragedy by ricocheting between earnest soul-searching, righteous indignation and acting-out wildly: Losing her virginity and seducing a teacher while erratically pursuing justice. However, Lisa is just the center of Lonergan’s complex tapestry of life in post-9/11 New York. He threads us through the lives of Lisa’s divorced parents, her mother’s new beau (Reno), the victim’s best friend, the police, the lawyers, Lisa’s teachers (Damon and Broderick), her friends and the bus driver (Ruffalo) who disputes her version of the accident. All of them are interconnected yet separate. In an ironic twist on the Tower of Babel, everyone here speaks the same language but still cannot communicate with each other.

Margaret is finally getting a video release on a two-disc set featuring both the 150-minute theatrical version and a three-hour extended version. Lonergan has made it clear that he approves of both versions. He is bound by confidentiality agreements in the lawsuits surrounding the film, but Lonergan is being honest. Each has different merits. The theatrical cut is tighter but feels rushed at times, especially in the last section when you can feel Lonergan straining to resolve his sprawling narrative. The extended version is slower but deeper. After watching the theatrical cut, I immediately wanted to plunge into the extended cut. It may seem crazy to suggest spending over five hours watching similar but different versions of a single movie. But in this case, it is an investment of time that yields an incomparable cinematic experience, one that is both thought provoking and deeply human.