Reconnecting with nature is about more than a brief hike once upon an autumn Saturday, though that’s a start. It’s about pulling back the heavy blanket of suburban congestion and stepping into the simplicity of wildlife. Of listening to things slowing down to let the silence soak in. It’s about harmonizing the details of our lives with the very elements technology and modern conveniences separate us from. And no place more than in our homes do we yen for this. Evolution has brought us to better, and safer, domiciles than seeking shelter in caves or stick houses in trees, but the basic urge to be connected to our environs remains. We want that undeniable feeling of relaxation that comes with the free and easy outdoors. But, we still want all our stuff. And we don’t want to be inconvenienced. And it better be beautiful…and one of a kind…and the house should pretty much think for itself (and for us too)…and we need our…

In our super insatiable modern lives, we want it all. And we want it all at once. Hence juxtaposing the seemingly contrary style modes of rustic and luxury. But a closer look finds less a marriage of opposites than a melding of contrasts where the sum heightens the intensity of the parts. More than just wanting a white-washed, so-called early-American farm kitchen, the design trend more homeowners are moving towards is the concept that rustic is true and uncomplicated and thus inherently elegant. More than that is the concept they can capture the comforts of nature and still maintain the conveniences of luxury living.

Timberline, the home of Steve Dubrovsky, principal of Woodstone Companies (a development firm specializing in high-end gated communities), might be an exemplar of the idea that nature and elegance are complementary, not contrary. The 12,000 square-foot home is like a personalized lodge. Every detail was designed by Dubrovsky with one eye focused on craftsmanship and the other on history. As both designer and builder, he was able to think every iota through and, more importantly, plan how they would work together. Every cell of the house has purpose, from the foundation up. It results in a visual masterpiece, yes, but what is particularly striking is it’s a space in which everything is moving together, harmonizing, collaborating. And this feeling of cohesiveness is palpable immediately upon crossing the front threshold. A tour of Timberline, and some time with Dubrovsky, lent a glimpse of how it all works.

More than the hammer and nails that built Timberline, the foundation stems from a philosophical place. A profound respect for the materials (and the earth that provided them) is central to Dubrovsky’s intention that “nothing go to waste.” A log cut today for stairs is limbed and the pieces are saved until, let’s say, the banister is in need of just the right curlicue embellishment to finish the landing. He followed the rhythm of things. He began “looking at something they used a long time ago as structure and [thought] ‘there’s movement in this’” and he refined the process from there. Likewise, the undeniable focal point of the home is not front and center in the footprint. Rather, the dining room (and listening room below it) was inspired by Stonehenge. Dubrovsky was struck by the idea of the ancient place and included the circle of stones in his design. Upon entering the home, the dining room is somewhat obscured (it is on the back face of the house, slightly off center), but you can glimpse it from the door. And as you get closer, you understand you are entering a place meant for gatherings, for sharing and for communing. Undeniably, that design toward openness and exchange sets a tone that is carried throughout Timberline. A subtle repetition, like an echo, is the open landing at the top of the stairs that leads down an exposed walkway to two bedrooms. Below it, the kitchen sits opposite the dining room, also open faced, and a sitting room and mudroom are farther off to its side. The master’s quarters are at the opposite end of the footprint, not hidden, but not exposed either. The office is off the main foyer (a subtle hint this guy means business) and his suite sits just slightly tucked back from the great room. The way the light travels through the space lets you know something is there, but it doesn’t beckon your entrance. Again harmonizing, albeit this time between warm welcome and a calculation of privacy. 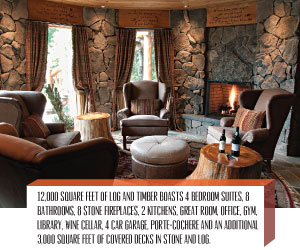 The surprising thing about Timberline is the décor. While the furnishings are decidedly rustic, hearty and uncomplicated in character (think lots of strong, thick-legged furniture, lots of heavy, square lines and minimal ornamentation), the embellishments are not. The textiles, carpets, accessories and draperies show more intricate motifs, often even in gold and auburn. The connection is the quality of the fabrics, sturdy and rich, just like the furniture. “My product is a hybrid of the great camps of the Adirondacks and the Great Lodges of the Northwest. The consistency between them is the Oriental influence.” Dubrovsky is pointing to the tradition of the lodges in the early days of our country. At a time when the railroads began dissecting our lands it became en vogue for those industrialist families, as well as Europe’s aristocracy, to experience the adventure. At the ends of the lines lie large compounds. Naturally this was not the only traveling these wealthy families did, thus the homes became filled with their treasures from abroad, primarily the Orient. The effect of the two creates a space that conveys a warm sense of history, which feels familiar and safe. There is a sense, these things have endured and will continue and I am part of the legacy. The key to keeping them all together is color. “I like to see color that you will see outside when you scan the area. Shades of mossy green and tans, and there are many shades you can go with. And you can brighten it up with lighter shades of those. It’s supposed to take you back to a different era.”

It comes full circle to the basis of it all: The trees. It’s one thing to mortar a trunk into a wall, but it’s entirely different when there is a tree rooted through the center of the house. “Usually people haven’t seen trees used in structure… You can tell the trees are holding up the center structure. There’s something stable about the trees. When you’re a kid, you go to the forest and the trees are the strongest thing.” The trunks also allow homeowners to individualize. One understated example may be Timberline’s wine cellar. The corners are set by the four quarters of the trunk of a single tree. It creates a cohesive place, in which the natural lines of the trunk continue fully around—you can see it, but you can also feel it. Other unmistakable accents are the carvings. Timberline happens to be a residence hall for bears, the patron animals of the Catskills. Dubrovsky points to the carvings as a way of personalizing a home. In his own, the bears are usually whimsical, ironic even, which convey his sense of humor. In the Stonehenge listening room, quotes are carved into panels set between the pillars. In the homes he builds for clients, “We sit with the owners to try to get a feel of what people like. Some people like geometric designs, some like their pets, or eagles, and it really connects,” the home to the person, as well as point to the uniqueness of the design.

The rest of the lower floor is a smart flow of areas that blend into each other to create one large entertainment space. The stairs land in a central media room with a well-stocked bar. Again, no detail is left unattended: The flatscreen tv is hidden behind a custom cabinet fashioned from antique wood signs and the bar is ceilinged by copper-stamped tiles (copper was used instead of tin to continue the warm tones). To the right is a writing area, the Stonehendge listening room, wine cellar and guest suite. A corridor off the media room leads past the terrarium to a workout center and finally, a rodeo-style café. Both levels of the home open to decks that follow the flowing silhouette.

Timberline resides within the 3,000-acre lakefront Chapin Estates, a gated community in Bethel, NY, which Dubrovsky’s Woodstone company is developing. Chapin attracts a clientele ranging from NYC-based executives to movie industry moguls. The connection among them is a love for nature, but also the need to have a retreat where things can slow down, whether or not the owners actually go hiking. What they’re responding to is a natural, uncomplicated tranquility that hits the reset button on their souls. Capturing the timelessness of the surroundings and stripping away life’s daily complexities come intuitively to Dubrovsky. In the same matter of fact way he approaches the development of a home, he says, “All we’re doing is taking what’s outside and bringing it inside. That is such an old aesthetic. The Chinese have been doing that for generations.”