This month, fotofoto Gallery in Huntington features two artists who use the natural to create the supernatural—with stunning results. Photographer Kristin Holcomb presents Rapture, a series of photographs celebrating the glory of natural light in dramatic landscapes from all over the globe, and photographer/graphic artist Holly Gordon presents Holly Meets Hokusai, a series of digitally enhanced images of the Ke’anae Peninsula, Hawaii.

Holcomb’s oeuvre devotes itself to a kind of harness and release; she’s managed to find natural light doing its ephemeral, elusive dance in dramatic fashion everywhere from Central America to the Arctic Circle. There’s an obvious beauty in her images, but also a sense of daring and drama, of sights never before seen—and never to be seen again. Complementing this aesthetic of adventure, Gordon’s love letter to the Pacific island paradise of Maui is striking and kinetic; she uses digital enhancement of light and motion and some crafty color correction to create intense black and white serendipity in her landscape subjects. The two artists’ sensibilities are innately simpatico, giving the entire exhibition a seamless unity and flow. A public reception for both artists will be held on Saturday, October 6th from 5-7pm. Admission is free. 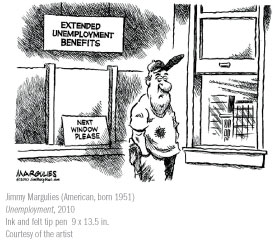 The presidential candidates will be slinging the requisite bull at Hofstra this month, and the University has supplied some timely gallows humor with the exhibit Political Slant: Editorial Cartoons at the David Filderman Gallery in the Axinn Library on the South Campus of Hofstra University. The exhibit features original sketches and prints of contemporary political cartoons by five editorial cartoonists: Mike Keefe, Steve Kelley, Jimmy Margulies, Signe Wilkinson and Walt Handelsman. Topics tackled, ridiculed, attacked and mocked include education (or lack thereof), the economy (or lack thereof), human rights (or lack thereof), and that old standby—international diplomacy (or lack thereof). Works by the late 19th century political artist and original smartass Thomas Nast provide an historical perspective, reminding us that while the end might be near—it has been for a hundred and fifty years already.