Our computers think for us, our cars think for us, our phones think for us, wouldn’t it make sense for our homes to think for us? Let’s face it, thinking for yourself is so…20th century. But until the Jetsons are ready to lend you their Rosie, you are on your own. Unless of course, you capture the latest technology to transform your abode into a smart house.

Let’s say you’re working late. It’s winter and before you left the house this morning, you turned the heat down to save fuel. You’re now not going to get home until after 10pm. Oh, and it’s snowing. A smart house will allow you to turn up the heat, turn on the lights, monitor the home security cameras, turn off the water (if you’re worried about pipes freezing) and whatever else your heart desires—like getting the Jacuzzi going so it’s the perfect temperature when you get there.

It’s not a new concept. Dreams of sci-fi homes have been around for decades. What’s new is the fact that the systems are so comprehensive and so easily accessible, they can be controlled from the other side of the planet via iPhone, computer or iPad. So the systems are ideal for vacation homes as well as last minute changes of plan to the primary residence.

Home automation is also being embraced because it makes daily tasks more efficient. For those who reside in large homes with many rooms, simple tasks like adjusting temperatures, lights and window fixtures take more and more time and effort. Brian McAuliff, President, Founder and Principal Designer at Bohemia’s Bri-Tech Inc. illustrates the problem and the solution: “[The house] could have eighty switches of lights…five garage doors, 12 zones of air conditioning and if you want to just use the house, it becomes a tedious job. When I go to bed at night, I just want to hit one button.” Press that virtual button and the action takes place with zero effort on your part.

A simple program custom made for the home and client’s unique specs is all that’s needed. Presets can make several changes at once and, “Even a complicated home can be controlled with four or five buttons,” according to McAuliff.

Lighting is the most important automated element—both artificial illumination and natural light controlled by shades. Take for instance an eat-in kitchen, a space so versatile it’s used for cooking, eating and entertaining. Each of these activities requires different lighting motifs and automation allows these changes to happen in an instant. In the “cooking” mode, “The counters are nice and bright, but maybe the accent lighting over the eating areas are dimmer.” The “dining” setting swaps lighting intensity and in the “entertaining” setting, “The lights would go to a place [that makes] the room look as beautiful as it possibly can look,” McAuliff explains. 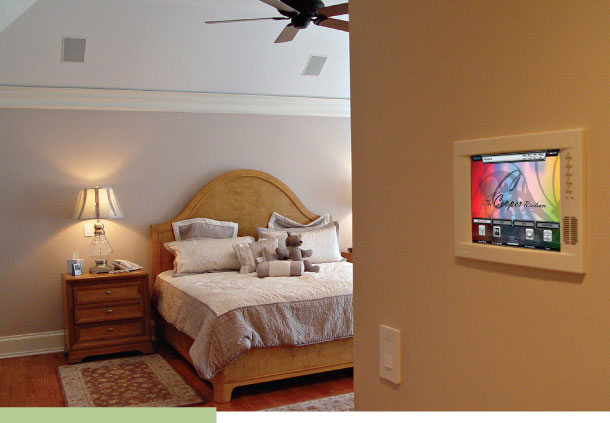 Lighting is also a major priority because its layout is inextricably linked to the design of the rooms. “[Lighting] you need to think about in advance,” McAuliff cautions. “The motorized shades and things like music and such—you can plan for those things and run some wires but you don’t have to make a big investment right away. Lighting has to be designed in, so it’s a good starting point.”

Illumination may be the foundation of intelligent home automation, but it’s the automated audio/video systems that make for the bells and whistles. Multiple television sources are all available at a glance, whether satellite, cable box or DVD/Blu-Ray. A preview of a particular source can be viewed on the remote or control screen along with channel presets and picture controls. Each of the sources can be routed to one or several televisions at once.

Motorization, one of the sexier aspects of a seamless smart home, comes into play in a/v systems. Televisions, movie screens and projectors can be concealed at will, creating an unbroken interior design theme. “People like tv’s but they don’t want to see them so we’re motorizing them out of the way because the aesthetic finishes of the high end property are pretty important,” McAuliff says.

“We are seeing that for very high end automation, people want everything to vanish completely,” says Jim Macri of Oakwood Automation Systems in Huntington Station. A recent installation by Oakwood in a high-end residence did just that—automating a home theater to completely disappear. “You don’t even know that it’s a theater until you turn it on,” Macri says.

Home automation can also be practical, giving the homeowner considerable surveillance and security capability and energy savings, either at home or away. “Many people are focused on safety through surveillance systems,” Macri says. “People want to be able to record what is going on around the home, but also they want to be able to view their home in real time, no matter where they are.”

Gone are the days of huge television banks and controls used by corporations and the super rich—comprehensive security and surveillance for a property is accessible via the control pad. Beyond intruder alerts, a whole suite of sensors can detect water leaks, frozen pipes and fires, and notify you by way of touchscreen or cell phone. House keys are also obsolete—doors can be locked and unlocked at will with the touch of a virtual button. Take it a step further and push the technology to control settings on pools, Jacuzzis, any specialty electronics or even monitor your solar panels with it.

Controlling energy usage becomes easier when all that is required is the touch of a button to close shades and turn of electronics. In an un-automated home “there could be tv’s on in different rooms, lights on all over the place, somebody could have windows open and the HVAC on. It just becomes wasteful,” McAuliff says. 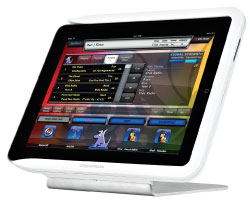 Behind the scenes, it might seem like all this automation is made possible by a morass of wires and circuit boards, but the truth is a lot simpler. “The wireless revolution is changing the way automation, security, surveillance and audio/video are being used in the home. This is perhaps the biggest game changer over the last ten years,” Macri says. “For example, if you wanted to wire five rooms in your home with music in the past you would need to run wires from all five rooms into an a/v closet somewhere. Now we are able to house an individual unit in each room that runs the music and connects wirelessly back to a main unit.” For the user, a discreet touchscreen paneled into a wall provides full access to all the functionality. Similar in makeup to an iPad, it even has a graphic equalizer that can adjust music flowing through the rooms.

McAuliff sees home automation heralding the end of wall-mounted light switches and thermostats and all associated wires. “It’s always the same switch that was invented …and you have to bring all these big electrical wires to every switch…it’s crazy to do it that way, and the aesthetic look is terrible,” he says.

How long a home automation installation will take is a big question for the homeowner, but there isn’t an easy answer. “It depends on the home,” McAuliff explains. “If it’s an existing 3-bedroom ranch, not very long, it can be done in a few days. But a larger estate home…you’d talk to your interior decorator, you’d make a plan, you’d have some dialogue, what features do they want. It’s not a one-size-fits-all in this business.”

All this makes for a smart home, but as technology progresses, the home could get even smarter. “One future trend that we see might emerge is personal identification,” Macri says. For example, using RFID [Radio Frequency Identification] or some technology like Bluetooth, a sensor could not only know that a room was occupied or that someone came home, but the sensor could know who it was that occupied that room, or who came home. This could be useful in setting lights, HVAC, home theater and music to what that particular person usually prefers.”

Indeed, it appears today’s smart home is tomorrow’s genius. The functionality entering the scene is not only thinking for you, it’s thinking about you, premeditating preferences, adjusting to moods and so on. Now if only it could really pull a Rosie the Robot and cook dinner.