Born in oppressive Czarist Russia in 1887, Marc Chagall’s paintings and his career were ultimately an exercise in hope and transcendence. These core elements, married seamlessly to his unique spiritual perspective and deeply vibrant aesthetic, bring this collection of his work to brilliant life within the four walls (and elegant grounds) of the Nassau County Museum of Art, still one of the more underrated cultural destinations on Long Island.

The placards and an expansive timeline side exhibit do an excellent job of tracking the interesting chronology of Chagall’s life and career so that the paintings in the exhibit don’t have that responsibility. As a result, this roaming and expansive exhibit of his work has been curated in the true spirit of Chagall, suspended from time and gravity, free to float, dream and inspire.

Chagall’s oeuvre barely touches on the schools and trends that dominated his formative years in turn of the century Paris. Flirting briefly and cruising lightly through the eye of Picasso’s Cubist hurricane and the bold Fauvism of Matisse and Derain, Chagall and his cadre of surreal motifs seem to routinely arrive at the highest space an artist can shoot for, one where he’s free to play in a universe of his own creation.

While there is deep reverence and spirituality in his subject matter, there is also a sense of rebellion in Chagall’s approach, an escapism warmly disguised in a sincere belief in beauty and true love that transcends life’s inevitable bouts of misery. In Chagall’s universe acrobats, rabbis, fiddlers, donkeys and roosters effortlessly emerge from the depths of solemn reality with nothing but wings and a belief in the limitless.

La caleche fantastique (1949) exemplifies this desire for departure. It breathes with A Midsummer Night’s Dream sense of the phantasmagorical yet grounds itself with a warm orange/yellow sun and grimy browns that complement the surreal purples and blues wisping around the main free-floating subjects. Chagall often appears (thinly veiled) in his own work; here he can be seen as the flying fiddler, free from the shackles of circumstance, an angel watching over his childhood village of Vitebsk, perhaps serenading his oppressed brethren with joyous strings of hope. 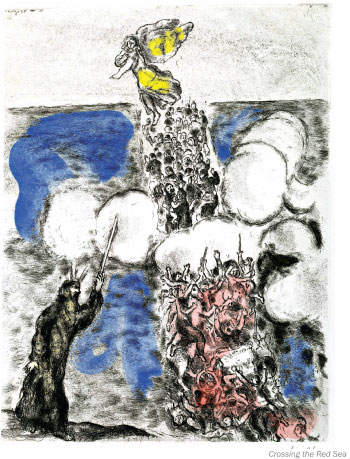 Similar themes and symbolism pervade La noce villageoise (late 1930s). Sullen angels share a pastel sky with flying cattle and a young boy—presumably Chagall once again, giving flight to his own spirit. More subdued, but no less evocative, is Chagall’s use of warmer colors in this piece, where the earthen village of his childhood seems suspended against a backdrop of dusty light tobacco, with a sharp orange sun and a rich maize-toned egg that gives birth (and once again, flight) to a dove of peace.

In 1930, Chagall was commissioned by renowned French art collector/dealer and publisher Louis-Ambroise Vollard to do a series of etchings based on the Bible. As a deeply religious Jew, Chagall gravitated to the task, though it took him until 1957 to finish. “The Bible is life, an echo of nature, and this is the secret I have endeavored to transmit,” Chagall said of the project. Even in that brief comment, we get a sense of Chagall’s higher frequency, his willingness to channel rather than control.

The Bible-based drawings exhibited in the second floor galleries of the museum mark the first time this collection of work has been seen on Long Island. The Bible series gives us a glimpse of Chagall in repose. There’s just the slightest sense of restraint and reverence in his approach, a humble, concentrated effort to do his faith proud. But rest assured his sense of poetry shines through.

Chagall does well to leave his Biblical heroes rather emotionless, allowing the viewer to project all of their hopes, fears and beliefs onto the iconic figures of the Old Testament. Samson’s face is decidedly passive in Samson Destroys the Temple and Isaac’s son shows little emotion in his epic battle in Jacob Wrestling With the Angel. It’s as if Chagall was as committed to keeping himself out of the Bible etchings as he was committed to injecting himself into his other paintings.

Nassau County Museum of Art founding president and current executive vice president Arnold Saltzman and former museum director Constance Schwartz have done a fine job in making this ambitious, highly respectable and enjoyable exhibit a reality. Rarely does such a cogent collection of work from one of cultural history’s true masters make it to the suburbs. And while all of Chagall’s work is stunning, it’s really his inner qualities—his suspension of disbelief, his intense trust in and use of color, and his gift for taking life’s darker moments and lifting them into the light of hope—that are on full display until November 4th.