The Monkees released their first single “Last Train to Clarksville” in August 1966. It was the same month The Beatles played their last live commercial show at San Francisco’s Candlestick Park. Weeks later, the television show about four zany, out-of-work mop-top musicians who wanted to be The Beatles debuted on NBC. Over 400 musician-actors responded to ads in Daily Variety and The Hollywood Reporter, but the producers cast Tony-nominated Englishman (and soon-to-be heartthrob) Davy Jones, television actor and rock musician Micky Dolenz, country-rocker Mike Nesmith and Greenwich Village folk musician Peter Tork to star in the comedy.

The post-modern show was an imaginative mix of madcap antics interspersed with musical numbers and self-referential asides wherein the actors addressed the audience. And while The Monkees became a successful, Emmy award-winning series, some music critics deemed the band “The Pre-Fab Four” when they learned that the group didn’t play on all of their recordings. It didn’t seem to matter that The Beach Boys, The Byrds and many other groups of that era also used session musicians in the studio.

“It was the first time the television and record industries cast a show together,” recalls Monkee singer/drummer Dolenz. “A lot of people didn’t get that it was a tv show about a band that wanted to be The Beatles. The closest thing to The Monkees now is Glee, which is about a glee club in a fictitious high school. But I don’t think people would call them a manufactured or prefab glee club. It just doesn’t compute. The cast of Glee can sing and dance, just as we can sing and dance and play.”

After vying for more creative control, The Monkees played most of the instruments on their third record, Headquarters—featuring Nesmith’s “You Just May Be the One” and Dolenz’s “Randy Scouse Git,”—and it hit number one. Their fourth album, Pisces, Aquarius, Capricorn & Jones Ltd., including “Pleasant Valley Sunday,” “Words,” “She Hangs Out” and “Cuddly Toy,” is considered to be one of the group’s best. Both of these records were released in 1967, the year The Monkees outsold The Beatles and the Stones.

“One of the main reasons for the success would have to be the songwriters,” notes Dolenz, now 67. “We had all these incredible songwriters writing songs for us—Neil Diamond, David Gates, Boyce and Hart, Harry Nilsson, Carole King and Gerry Goffin—that had a lot to do with it. Then, of course, you have to produce it well and have somebody sing it, so I’d like to think I had something to do with it… But [our songbook] did involve a lot of different people at a lot of different levels besides the four of us.” 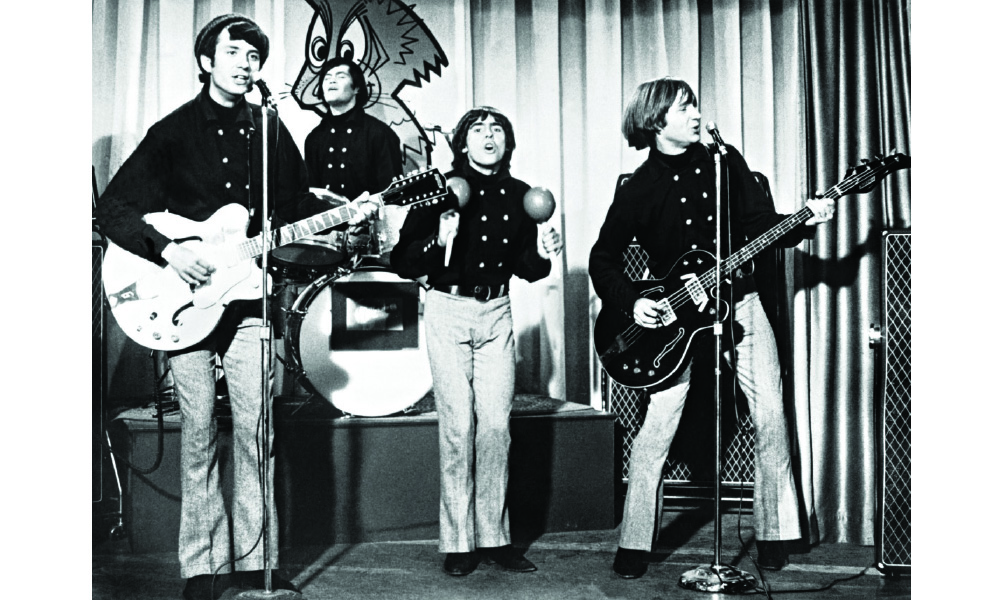 Aside from the music and the style of the show, Dolenz attributes its universal appeal to the fact that they were always struggling to succeed. Like the modern-day comedic musical duo of Bret and Jemaine on Flight of the Conchords, The Monkees were always trying to get a gig or a record deal to pay the rent. Dolenz also points out that the show wasn’t satirical or news-related like Laugh-In, but more of a screwball comedy that doesn’t date, like I Love Lucy or the Marx Brothers.

“The Monkees have often been compared to the Marx Brothers,” recalls Dolenz. “In fact, it was John Lennon who basically made the comparison first. And I think it was very accurate. He got that The Monkees were like the Marx Brothers on television, like one of their musical movies.”

When the charismatic Davy Jones unexpectedly passed away in February, it became clear just how much The Monkees transformed popular culture. Along with Jones’ boyish good looks and distinct voice, his dance moves—like the Boogaloo and the Sideways Shimmy—influenced the likes of David Cassidy, Axl Rose and Justin Bieber. And artists from Frank Zappa, Tom Petty, and the Sex Pistols to Kurt Cobain, U2 and R.E.M. were inspired by the Monkees.

Their 12-date reunion tour, “An Evening with The Monkees,” brings Dolenz, Tork and Nesmith together onstage for the first time in 15 years. They intend to perform music off of Headquarters and Pisces as a trio showcasing their garage-band sound, while also delving into some deeper cuts with a fuller band. Of course they will perform Jones’ signature song “Daydream Believer,” and he will be saluted through music, film and photographs.

“I love singing ‘Pleasant Valley Sunday,’ ‘Sometime in the Morning,’ ‘Steppin’ Stone’… And ‘Goin’ Down’ is a great song to sing onstage,” says Dolenz, who recently released a solo record entitled Remember. “I have no problem singing all the songs over the years because what happens is, after you have those kind of hits, you don’t really own those songs. They belong to the fans. And once you understand that, you don’t have any problem singing them.”