Works by a Pop art pioneer are on display at the University Art Gallery at Stony Brook University. The Larry Rivers: Collaborations and Appropriations exhibition features 11 large-scale, three-dimensional relief paintings by the titular artist along with eight collaborative drawings, lithographs and two experimental films.

The 11 paintings “appropriate” the work of other artists, i.e. the rendering of Vincent Van Gogh in Art and the Artist: Chairs and Van Gogh should be familiar to even the most casual art hound.

The theme of collaboration and artistic synthesis is the common thread running through the entire show. Guest curator Helen A. Harrison, Director of the Pollock-Krasner House and Study Center in East Hampton, gave insight to the exhibit’s chosen tack, stating, “Perhaps because of his background as a professional jazz musician, Larry Rivers was predisposed to creative collaboration and appropriation.” Harrison will present a free gallery tour of the exhibition on Wednesday, November 7th at 1pm.

Larry Rivers: Collaborations and Appropriations will run until December 8 at the University Art Gallery at Stony Brook University. (631) 632-7240, target=”_blank”>art.sunysb.edu. 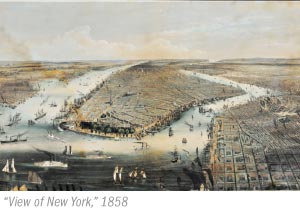 In the Victorian era, a well-appointed household was not complete without a Currier & Ives print hanging in a prominent spot. The Suffolk County Historical Society (SCHS) in Riverhead will have almost 300 original prints from the iconic 19th century printmaking firm gracing its walls until January with the exhibit Currier & Ives: Printmakers to the America People.

Massachusetts-born printmaker Nathaniel Currier started his own New York City firm in 1835 using the then-new process of lithography to produce such materials as sheet music and handbills. Images were drawn directly onto limestone printing plates, then printed and colored by hand. He first hit it big creating “disaster prints.” His rendering of the steamboat Lexington’s fiery sinking on the Long Island Sound sold thousands of copies within days of its release. James Ives became a full partner in 1857, handling the business and marketing arm with great success. Printing advances soon superseded public demand for lithography and the company shuttered in 1907. But in that time, Currier & Ives produced some 7,500 different images made into millions of prints with two to three completed works a week for 64 straight years. Currier had ongoing commissions with some of the top artists of the time, each with a specialty, such as sporting events, landscapes and winter scenes—the last provided by Fanny Palmer, the first full-time female professional artist in American history. Included in the exhibit is the 1858 lithograph View of New York, seen in the opening of Martin Scorsese’s film Gangs of New York.

There will be a wine tasting and gallery talk by Currier & Ives expert John Zak at SCHS on November 9 from 6-8pm.

Currier & Ives: Printmakers to the America People will be on view until January 25, 2013 at the Suffolk County Historical Society, 300 West Main St., Riverhead. (631) 727-2881, suffolkcountyhistoricalsociety.org.