Running alongside the Heckscher Museum’s Robert Neuman exhibition is Absorbed by Color: Art in the 20th Century, a soft and soothing overview of contemporary color theory and the “space between the leaves.”

Absorbed by Color features an enlightening variety of works from artists that gradually improvised their way out from under the Post-Impressionist European shadow of the late 19th Century. Many 20th Century artistic movements were inspired by Einstein’s Theory of Relativity and its assertion that time and space are non-finite, subjective concepts. To an artist who suspects this truth in the first place, this scientific validity represented the freedom to fracture, to disengage from the perceived reality of the physical world and delve into the universe of emotion and intuition. For these artists, the world of the “unseen” was the castle, and color was the key.

In the context of the Heckscher exhibit, Arthur B. Carles takes the first step in this direction in Nude with Red Hair (undated). While the work is a sensual rendering that recalls definitively the portraiture of Cezanne at the height of his Impressionistic powers, we can first sense form and traditional beauty ever so slowly giving way to the abstract. 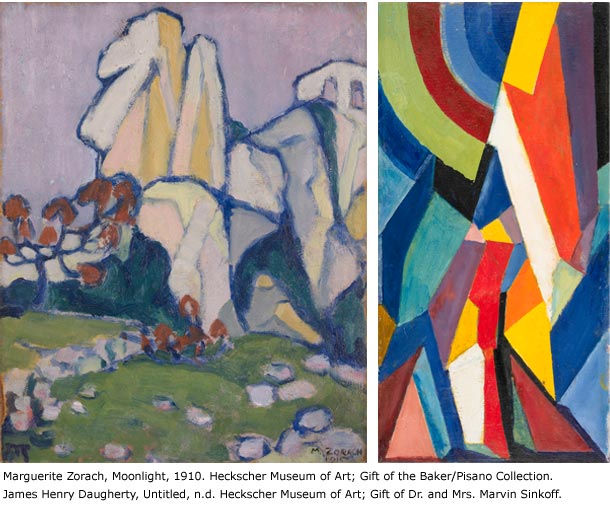 George Biddle’s Landscape/Cuba (1925) advances this shift with its Fauvist principles of color and progressively diluted perspective of depth and form. Oscar Bleumner’s Landscape (1922) goes a step further, abandoning nearly all sense of reality, leaving everything to the imagination; whatever focus it has is geared solely toward the integration deep blues and purples and their eventual juxtaposition with warm reds and oranges. Where Biddle’s interpretation puts a pastoral image to Cuba as his contemporary Hemingway might have experienced it, Bleumer’s work pulls towards an inner world, a gentle, dreamlike coalescence of the physical and the metaphysical.

Hugh Breckenridge’s Abstraction #50 (1917-18) takes the full leap away from the European traditions altogether and flies fearlessly, if quietly, into new space. This work is a pure meditation; it reads like a worn piece of translucent beach glass held up to candlelight so that its muted refraction might fill (or empty) the heart and mind.

Conceptually, the exhibit reaches it apex with Stan Brodsky’s Mostly Blue (1975). The Long Island-based modernist takes his sweet time on a broad canvas of light hues with aquatic undertones, allowing the sea and the sky to merge in a surreal continuum. Then with clear but guileless intention, he frames the piece in grayish strips of seashore and distant sandbar. In contemplating this piece, one might be transported to the view Huntington Harbor and Long Island Sound, with Connecticut a faint strip of land in the distance. In its simplicity, the piece speaks to the entire modernist movement, where image is submerged in imagination and dreams are turned inside out. The result, like the exhibit itself, is wistfully narcotic, innately peaceful and carefree in its elegance.

Absorbed By Color: Art in the 20th Century runs at the Heckscher Museum of Art until December 5th.