Dressed in throwback running shoes and shorts, Chris Nicolson looks more like a guy about to go for a jog with Prefontaine than who he actually is: One of the most important young winemakers in New York. He plunges a long glass pipette (or “thief”) into a barrel and then offers a sample of the still-maturing blend of riesling and sauvignon blanc destined to become the house wine at Momofuku. As we swirl, smell and sip, he throws open the doors at the west end of the winery to the clear blue sky, letting the sea breeze blow in. The water laps at the pier beyond the open doors and the Statue of Liberty looks close enough to ding with a well-struck golf ball.

Nicolson exudes a certain infectious, near-manic energy. It’s as if the chaotic work of grapes and yeast, which are furiously changing in the barrels all around us at a molecular level, channels through him and comes out in tumbles of words as he struggles to describe the wines. It’s not that Nicolson is inarticulate; in fact, the opposite is true. It’s just that the Red Hook Winery isn’t quite like any other and stands out even among the new urban winery trend.

For starters there is the sheer number of different wines it produces (though at a small scale—just 750 to 850 cases a year). The overtaxed cellar master at Red Hook has his work cut out for him, keeping track of 64 different wines (or SKUs as they are commonly known). Then there is the unusual winemaker setup. Nicolson is the resident winemaker, and he oversees every wine from vineyard to bottle. But he also works with two renowned Napa-based winemakers who have very, very different approaches to winemaking. The setup is as schizophrenic as it is creative, with some of the wines produced under the direction of Robert Foley and others under Abe Schoener, both considered among the top tier of Napa winemakers. Each will argue forcefully that his approach conveys a truer expression of the vineyards and terroir, but their methods are at opposite ends of the spectrum. Foley, a grad of U.C. Davis with degrees in enology and viticulture, takes a precise approach to create very clean, technically correct wines, while Schoener, a reformed academic who taught ancient Greek philosophy at St. John’s College in Annapolis, has a more naturalistic tendency that can result in somewhat gnarly (though undeniably interesting) wines. Then of course there is the matter of the grapes coming from 14 different growers—mostly on the North Fork—to Pier 41 in Brooklyn, where the wines are made.

Throw in the three principal partners of the Red Hook Winery, Mark Snyder, Max Loubiere and Michael Cinque (all of whom have deep roots in the wine business), and do the math—starting with the 64 SKUs and 14 vineyards, adding in two winemakers and three owners—and you can figure Nicolson is serving many masters (the first, of course, being Mother Nature).

The wines coming out of this unusual outpost are getting some of the highest acclaim of any ever made from Long Island grapes and might hold the key to the region’s hopes for respect on the world wine stage. And the fact that it’s happening in Red Hook, 100 miles from where the grapes grow, is not incidental. “I was one of those people with a fixation on Manhattan who didn’t believe that there was anything interesting going on in the outer boroughs,” says Abe Schoener. If he hadn’t changed his mind, there might not be a Red Hook Winery. All it took was a little change in perspective. 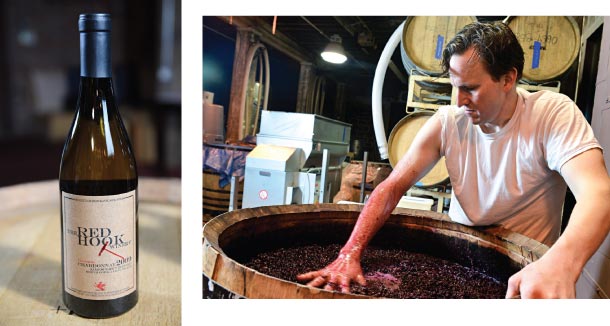 Schoener started to come around in 2004 when visiting the Brooklyn offices of Mark Snyder, a New York distributor of Schoener’s Napa-based wine label The Scholium Project. It took some urging, but when Snyder finally got him down to Red Hook for the first time, “I was amazed by how close you were to the water. I was amazed by the views of Manhattan.” It became his de facto camp whenever he was in New York on business.

All around them in Red Hook were people blowing glass and bending iron. Soon he and Snyder, so taken with the place, were talking about doing something—they weren’t quite sure what, but something—on the waterfront. While it might have seemed an incongruous place for one, a winery made the most sense for them.

The area, so deep in Brooklyn that the easiest way to get to it is by ferry, was once a hub of basement winemaking; Italian and Jewish immigrants brought their own winemaking traditions. “In Red Hook at the right time of year, you could smell the aroma of fermentation coming from most every home,” writes Robin Shulman of Depression-era home winemaking in her oral history-informed book Eat This City.

Originally Schoener and Snyder planned to ship grapes from California, as do most contemporary urban wineries. “Neither of us really had respect for Long Island wines,” says Schoener. Again, all it took was a little change in perspective. “It even seemed wrong from just a really simple winemaking perspective: The work you have to go through to get good grapes from California to New York doesn’t make sense.” They resolved that a Red Hook Winery would be a true New York winery, and that meant predominantly Long Island fruit. By 2007 they were scouting vineyards. “We knew that if we thought Long Island wines were weak, we also knew that we had never done an intensive investigation of them,” says Schoener. That was about to change.

Despite the stereotypes they’d heard about vineyards planted in old potato fields and the like, they found Long Island vineyards that displayed much of what they look for in California in terms of vegetative vigor and vines in balance. And much higher quality vineyards in general than what the naysayers had led him to believe. Even Long Island’s farming practices were coming along. 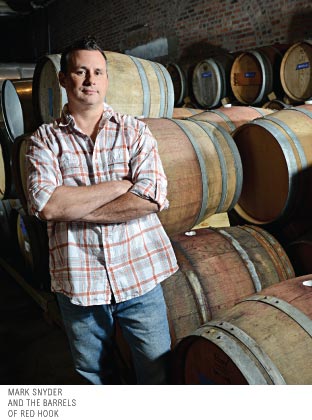 Michael Cinque provided the nascent Red Hook Winery a genuine link to the North Fork growers. As the owner of Amagansett Wines and Spirits since 1979, Cinque had long championed the region. He stocked some of the first bottles of Hargrave in his store and has maintained close ties to many growers and winemakers. When asked to go in on the winery with Snyder and Loubiere, he readily agreed. “I became the ambassador to strike the deals with growers,” he recalls. He still shepherds the grapes through, presiding over picking and providing the refrigerated trucks that bring the fruit to Brooklyn. Cinque may host private tastings for Rudy Giuliani and Jay McInerney, pal around with Ron Delsener and take motorcycle road trips with Alec Baldwin, but instead of sinking his resources into a polo team and a fleet of Ferraris, Cinque is committed to this project because he truly believes in the North Fork. His love for the region comes through in his attachment to the grapes. The batches of grapes typically get separated, with some going to Schoener and some to Foley, who make wildly divergent wines from the very same grapes. “With two totally different winemakers,” says Cinque, “It’s like separating twins at birth.”

Long Island is a risky place to grow wine grapes. It has a cool climate with monster heat spikes, early frost and lots of rain. The weather demands rigorous farming strategy: Good pruning and shoot thinning that leads to the clusters not being so close together (mainly to protect against rot and mildew). Schoener was unsure of exactly what to expect that first year on Long Island. “We were knocked out by the intensity of flavors that we got at much lower levels of ripeness,” he says.

Unpredictable weather means fruit may not be picked at exactly the same time every year. But the prospect has long been tantalizing because there is the possibility of making some very good wines here. And the proximity to New York City also means there is a large local appetite for these wines—after all, without the port city of Bordeaux, Bordeaux itself might never have risen to prominence. But the very conditions that make it difficult for the grapes to grow might be what give them their power. The grapes’ struggle to survive produces smaller, and in some cases, more intense berries. The maritime effect gives many of the wines a pleasing minerality and added complexity.

The wines of Red Hook Winery bear the marks of having weathered North Fork growing seasons. From all the great things Long Island can bring (minerality and a downright savory salinity) to the war wounds of epic struggles with rot, mildew and disease that have long plagued the region. Some of Schoener’s Red Hook wines are savage, mouth-filling whites that can almost drink like reds. Some of Foley’s show classic structure and pristine, bright fruit.

Walking out of Red Hook Winery after a whirlwind tasting (you’ll never come close to all 64, but it’s a dizzying experience nonetheless), the last thing you want is a wine made from California grapes. The first thing might be a beer “reset” at the Six Point Brewery around the corner on Van Dyke Street. After that, when you next peruse a wine list, your mind and palate will wander back to the wines of Red Hook. You just might find yourself gravitating toward unwieldy old world wines that are born of ancient limestone cellars or wines with names that sound like a gypsy curse placed on some long-dead Eastern European count.

UPDATE:
Just a few days after publishing this article, Red Hook Winery was brutalized in the aftermath of Hurricane Sandy, assuming total loss and devastation. Close to all of their barrels were submerged with five feet of water, which rushed in, toppling more than just the wine, but their equipment as well, from forklifts and pumps, to temperature control and computers. We would like to take this time to offer our sentiments to RHW, and the rest of the Red Hook community, who’s lives were forever changed, due to this heartbreaking attack from mother nature. Fortunately, RHW managed to save a large share of bottles that didn’t get wet, and are now offering their loyal customers and supporters, varying “survival kits.” Please visit Red Hook Winery’s website (http://www.redhookwinery.com/)for more information on placing your order via phone or email. Those interested in helping in the effort to clean up and rebuild Red Hook, can contact The Red Hook Initiative (718-858-6782), who will be matching up volunteers and donations with local businesses in need.