The earliest evidence of breadmaking was found in Europe and dated to about 30,000 years ago. This bread was most likely a combination of roasted and ground cereal grains and water. 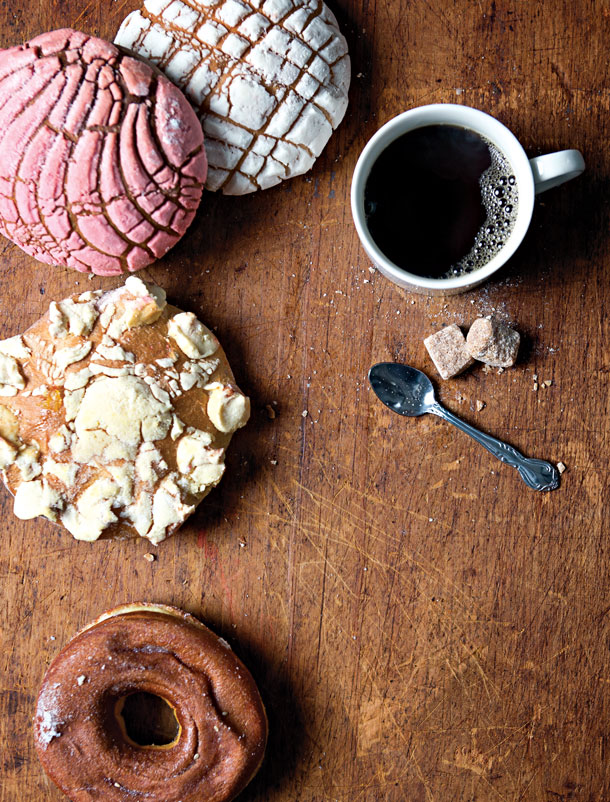 Pan Dulce, better known as sweet bread, is a staple in traditional Mexican and Latin American cuisine. One of the first non-native foods introduced by New Spain invaders was wheat. Although natives detested this new commodity, they had to work in the wheat farms for the colonists, and had to eat the wheat bread or starve. During the French occupation of Mexico in the 1800s, French rolls and pastries were introduced to the Mexican people. The battle of Puebla in 1862 ended the occupation, but Mexican’s love of sweet French bread stayed.

In a large glass bowl, combine warm water and yeast, stir. Mix in evaporated milk, sugar, salt, melted butter, egg and 2 cups of flour. Gradually add ground cinnamon and remaining flour. Knead dough for 5 minutes and place in a greased bowl, cover with towel. Allow to rise for 2 hours. While waiting for dough to rise, create the icing (recipe at lipulse.com). Once the dough is ready, cut evenly into 12 pieces. Shape into balls and place on cookie sheet. Gently flatten dough in preparation for the topping. Divide the topping into 12 portions. Shape into balls and flatten, then place on top of the dough already on the cookie sheet. Use a knife to score the top layer with parallel lines. Cover and let rise for another 45 minutes. Bake at 375 degrees for 15 to 19 minutes, until the buns are golden brown. Serve warm. 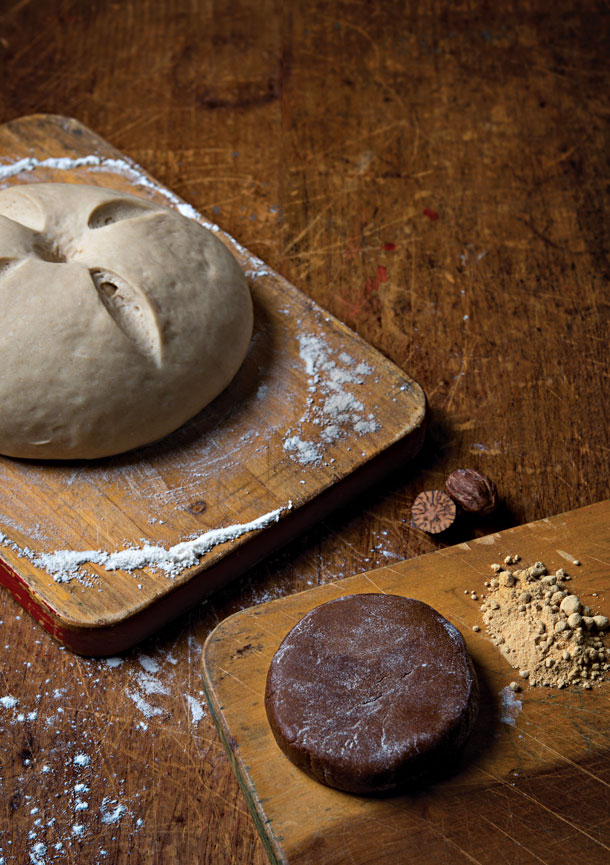 Alaskan Sourdough
Early western settlers relied on sourdough starter to leaven bread before store-bought yeast and baking powder were widely available. At the turn of the 20th century, western miners were nicknamed “Sourdoughs,” because they carried their starter in their backpacks, so they would always be able to make bread. Alaskan miners are said to have slept with their starter to prevent it from freezing overnight. Their variety of sourdough starter consists of flour, warm water, yeast, salt and sugar. If “fed” correctly, the starter can help feed families for years; older starters are highly coveted for their extra tanginess. The resulting bread has a light texture and a distinctive taste.

Jamaican Bulla
Jamaican Bulla bread, or Bulla cake, is a favorite pastry among Jamaicans and has become a symbol of development of the island nation. It is a moist, sweet bread made with molasses, ginger and nutmeg and is traditionally eaten with cheese and avocado.

In a small glass dish, combine molasses and 1 teaspoon of water and mix well. You want to get the consistency of syrup. If 1 teaspoon is not enough, add a bit more. Combine dry ingredients in a glass bowl and mix well. With a wooden spoon, make a well in the middle of the dry ingredients and add in molasses mixture, vegetable oil and melted butter. Gently fold until ingredients are incorporated and dough has formed. Once dough is ready, place on a floured surface and knead for 5 minutes. Using a rolling pin, roll out dough to 1/8 inch thickness, and cut into 3 or 4 inch circles. Place cakes on a greased baking sheet then into 350 degree oven. Bake bulla for 25 minutes, or until the cakes rise.

“Cockle Bread,” an English aphrodisiac in the 17th century, was bread kneaded with a woman’s vulva and given to her object of affection. This is thought to be the origin of the adage “a way to man’s heart is through his stomach.” 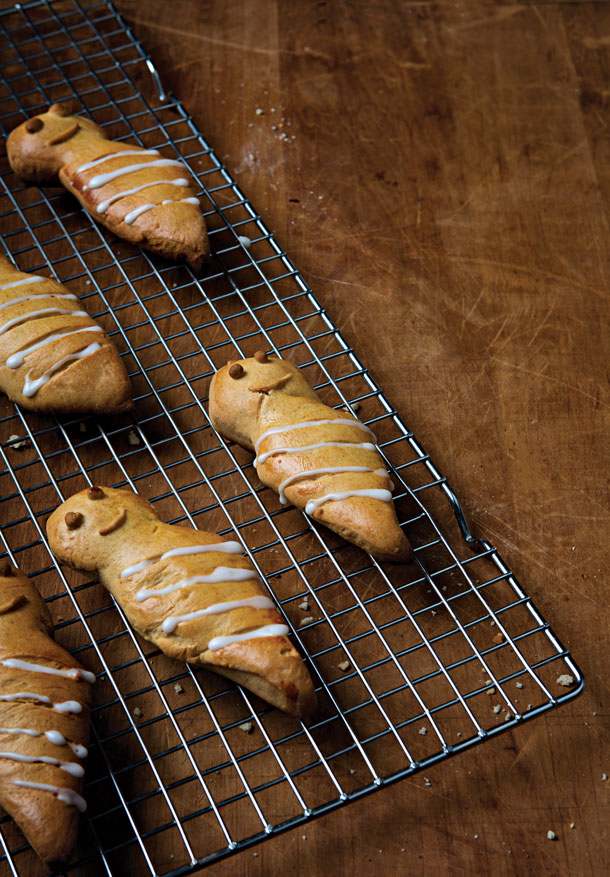 Andean Bread Babies, also known as Tanta Wawas, are made from sweet brioche-like dough and play an important role in the Day of the Dead. The bread babies are brought to the cemetery and offered to deceased family members. The Tanta Wawas are also used as table decorations and given to children as gifts.

In a separate bowl, mix the flours, sugar, yeast, salt, cinnamon and cloves. Make a well in the center and add the eggs (not the extra yolks), butter, milk, water and vanilla. Mix well, and then knead dough on floured surface for 15 minutes. Cover and let dough rest for 30 minutes. Divide the dough into 4 portions and roll into balls. Stretch the dough to create the elements of the baby bodies. Place the babies onto a greased and floured baking sheet, cover with plastic wrap and let the dough grow for 3 hours. Preheat oven to 350 degrees. Lightly brush the egg yolk over the babies and bake for 30 minutes. Let cool and store in an airtight container.

Croissants are technically bread, as they are made with yeast-leavened dough. 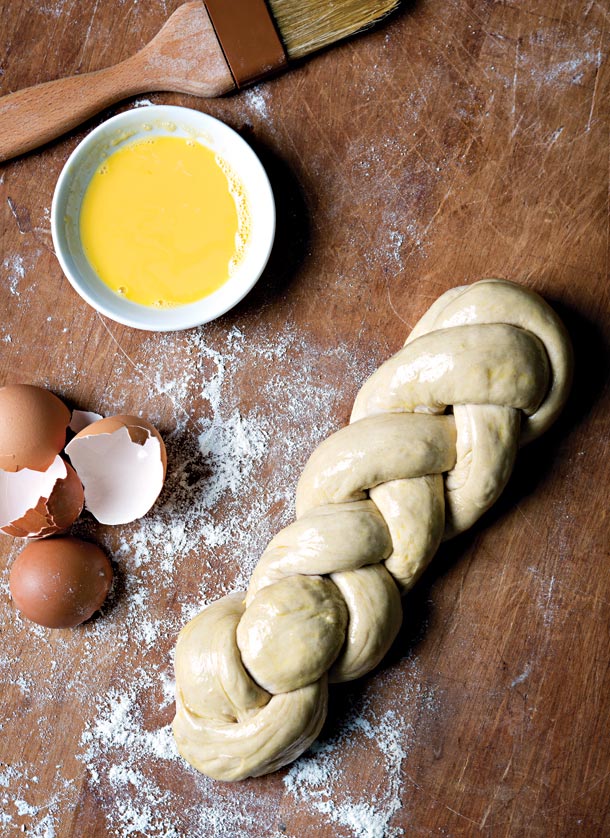 Originating in Germany, Hefezopf is a sweet, buttery wheat flour dough bread that can contain nuts or fruits. It is made from three single strands of dough braided together to form either a narrow loaf or a round wreath. The bread is popular as a centerpiece for special events and holidays.

Dissolve yeast in lukewarm milk, then mix with flour, salt, sugar and butter. Knead well until dough is smooth and elastic. Let rise in covered bowl for 1 hour or overnight in the refrigerator. Divide dough into three parts, and then roll out the three strands into roughly oblong shapes of the same length. Join the three strands at one end and braid them, using the same technique as braiding hair. Brush with egg yolk and then bake in a 400 degree oven for 40-55 minutes.

Although the host used for Holy Communion is called bread, it is technically a wafer.