Take a stroll on Main Street in Cold Spring Harbor and you’ll find much the same flavor of small town life that Long Islanders of centuries past lived in this tiny North Shore village—or in any number of other communities that dot the island.

The boat-filled harbor is still easily approachable from a shorefront park. Shingled homes that once sheltered the families of whalers and tradesmen still line Main Street, though most are now occupied by stores and offices. Look up and you’ll see the surrounding hills filled with trees. 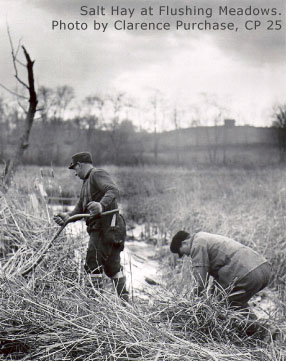 Move on, and you’ll pass a small red building that was constructed around 1880 as a harness shop and later housed the Cold Spring Harbor Hook & Ladder Company. Now it’s the Fire House Museum. A bit farther east and across the street, the Old Methodist Church of 1842 still has a bell tower though no one worships there anymore. It now belongs to the Society for the Preservation of Long Island Antiquities (SPLIA). The former sanctuary is the society’s new art gallery, with an opening exhibition that shows how locals lived and played at the dawn of the 20th century, when Long Island started shifting from farmland to modern suburbia, from horse-drawn carriage to motorized automobile.

“This was a period of great transformation in Long Island society,” said Robert B. MacKay, the society’s director, in his office below the gallery. “It was the decade that most shaped the world we live in here.” But Cold Spring Harbor and similar communities that he calls “the jewels in Long Island’s crown” have kept many of the charms “that predate the automobile age. They are walkable. They have signs that aren’t meant to be seen when you’re going 50 miles per hour.” They are part of what makes people want to live and work here and “instrumental to the future we’d all like to see.”

Preservation is no longer only about trying to protect individual buildings, he said, but saving “the fabric of communities. It’s about what’s happening on Main Street.” In the case of Cold Spring Harbor, that includes the areas behind buildings, which are mostly backed by yards. Two houses away from the former church, a coffee house overlooks the green space from a back porch. “It’s a wonderful combination of history and amenity.” It’s also an example of “adaptive reuse,” said Alexandra Parsons Wolfe, the society’s Director of Preservation Services. “The best way to keep a building alive is to keep it occupied.” Wolfe, who oversees the society’s biannual endangered properties list (nominations for 2013 are open through this December 15), said that adaptations, like creating a restaurant in a house or a former bank, “create a dialogue between the present and past that can be very exciting.” 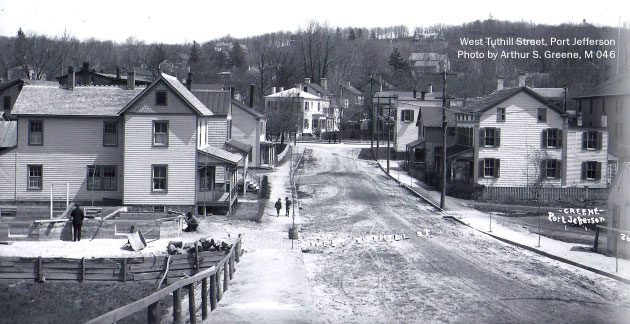 The gallery exhibition, which runs through the end of January, demonstrates how “the past is still present. It gives texture and meaning to a place,” Wolfe said. Living here can be “more engaging if you realize you’re not living in an anonymous, nowhere place, but in a place with a unique identity.” To that end, the 36 images in Long Island at Work and Play: Early 20th Century Photographs from SPLIA’s Collections were selected because they “spoke to us. They tell us a story,” said guest curator Lynn Stowell Pearson, who organized the exhibition with MacKay.

Around 1900, a horse-drawn peddler’s cart has stopped at a home in Manhasset. We see an apron-wearing woman from the back as, stooped over, she climbs back to her house up a steep dirt driveway from the muddy street. “She’s carrying something, and it looks heavy,” said Pearson. It’s probably a fish, since the cart has a picture of a swordfish on its side and the peddler, whom we also see only from the back, wears rubber boots.

Photos taken just a few years later reveal the transition to the car culture that soon helped define Long Island. In a 1904 photo a North Shore family has gotten dressed up for a family outing. Their open-air car features a crank at the front. At another time that year, the same newspaper photographer, Harry R. Gelwicks, captured two men in a sporty Renault that finished 13 out of 18 automobiles in the Vanderbilt Cup Race of 1904. The photo, Pearson said, was taken at or near Nirvana, a lavish estate belonging to the car’s owner, William Gould Brokaw, believed by some to be F. Scott Fitzgerald’s inspiration for Jay Gatsby in The Great Gatsby. Just a bit later, a swank Beaux Arts casino flourished in Huntington 1905-1907, part of a 400-acre resort that attracted “automobilists” to its waterfront location, now the site of the Bay Club. Other waterfront depictions are less glamorous: A pier in Bayville (now gone) was used by a Greenwich-Oyster Bay ferry that thrived in the 1920s, taking people and cars across Long Island Sound. 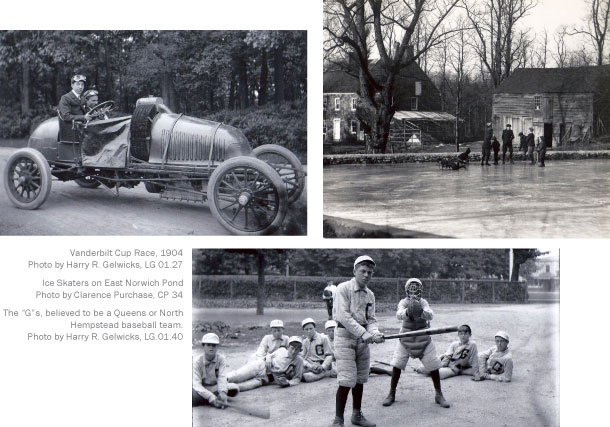 In contrast to the continuity in Cold Spring Harbor, many photos show “a Long Island that is no more,” said Pearson, such as a circa 1910 scene of two men harvesting salt hay in rural Flushing Meadows. The area, later occupied by two World’s Fairs, today hosts a baseball stadium, a tennis center and other examples of urban recreation. But other scenes show a Long Island that remains, in spirit or in fact: Youngsters ice skating on a frozen pond, boys proudly posing in their baseball uniforms, a house being built in Port Jefferson and the Garden City Cathedral, now the center of a suburban metropolis, rising from among cornfields, the only building in sight.

Renewed, destroyed or transformed, each image evokes a “place over time,” as MacKay calls it, and a piece of Long Island’s story. “History is about the future,” he said. “You don’t know where you’re going unless you know where you’ve come from.”