THE MASTER
Paul Thomas Anderson’s mesmerizing portrait of the intense friendship between an out-of-control veteran and a cult leader is a searing drama and a fascinating meditation on human nature. Audiences loved or hated it but few denied the brilliance of Joaquin Phoenix and Philip Seymour Hoffman.

FOOTNOTE
Biblical scholarship might not seem like the most promising subject for a movie, but this stunning Israeli film about the devastating rivalry between father-son scholars is alternately deliciously funny and hauntingly tragic.

MISS BALA
A Mexican teenager’s desire to be a beauty queen leads to an entanglement with drug gangs in this relentless adrenaline rush of a movie. 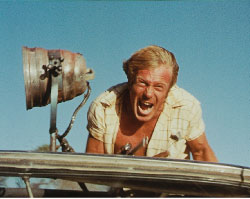 WAKE IN FRIGHT
This rediscovered Australian masterpiece might be 41 years old, but it is one of the best of this or any year. A bonded teacher in a tiny outback town just wants to go to Sydney for Christmas vacation. However, he has to go through the rough town of Bundanyabba, and becomes trapped in a nightmare of alcohol, sodomy, gambling and kangaroo hunting.

MOONRISE KINGDOM
Wes Anderson’s lyrical fable about two young lovers who run away to the forest appears deceptively simple at first glance but reveals rich complexity after further contemplation. This playful masterwork is the year’s most pleasurable movie.

THE DEEP BLUE SEA
Filmmaker Terence Davies is one of the under-appreciated treasures of cinema. Rachel Weisz shines in his drama about a woman who rebels against post-war Britain’s repressive society by sacrificing everything for love.

AMOUR
Anchored by pitch-perfect performances from French legends Jean-Louis Trintignant and Emmanuelle Riva, Michael Haneke’s drama about a long-married couple dealing with the consequences of a wife’s stroke is a romantic but painful look at the true meaning of “till death do us part.”

THIS IS NOT A FILM
In 2010, Iranian filmmaker Jafar Panahi was convicted of “assembly and colluding with the intention to commit crimes against national security and propaganda against the Islamic Republic.” Along with a six-year jail sentence, Panahi was banned from filmmaking for twenty years. While under house arrest awaiting his appeal, Panahi defied the government by making this autobiographical “essay,” which was smuggled out of Iran on a flash drive. Shot in his apartment, this is a powerful portrait of an artist under enormous pressure.

BEASTS OF THE SOUTHERN WILD
This exhilarating, moving tale about a young girl fighting to save her off-the-grid Louisiana community from both environmental catastrophe and forced absorption into mainstream society was the surprise hit of the year.

HOLY MOTORS
Monsieur Oscar glides across Paris in his limo. He transforms himself at each stop, enacting scenarios that range from eye-popping futuristic sex, to a wistful reunion of long-separated lovers and killing his own double. Heartbreaking, hilarious and totally barking mad, Leos Carax’s fantastical odyssey proves that movies have not lost their power to astonish.