My wife, Kelli, thinks I’m crazy. As a writer, I work from story to story, from deadline to deadline. She happily left papers and deadlines behind in college. I thrive on them. But I feel the crunch sometimes, too, never more so than when finalizing my last book manuscript. By the time the book was finished, I needed a break. Except that I’m not especially good at completely relaxing. I require some baseline level of activity, a yin and yang balance of active and relaxation in my travels. I want to kick back and lounge at a resort, but I also want to explore and experience a place. St. Croix, the largest of the US Virgin Islands (no passport required!), provides that balance.

I submit the manuscript to my publisher at 5pm on a Friday, and by 8am Saturday morning my wife, our two young girls and I are on a plane bound for the Caribbean. From the moment we arrive, we get the sense we’re going to like this place: A local school principal picking up friends at the airport sees our family of four and all the luggage and car seats and helps us carry our bags to the taxi stand.

Our home base for the trip is The Buccaneer, a grand estate whose Great House dates to the mid-17th century. It’s been open to the public as a resort since 1947, and over the last 65 years has welcomed its share of celebrities and no shortage of accolades from the likes of Travel+Leisure, Condé Naste Traveler and Islands magazines. Nearly 140 luxurious rooms (think marble or Italian porcelain) are spread between the Great House and a range of villas and cottages across the resort’s 350 acres, giving a relaxed, un-crowded vibe. Our girls are along for the trip, so we opt for a family cottage—less posh, but kid-friendly, with twin beds and playful, ocean-inspired décor in a dedicated children’s room that connects to mom and dad’s accommodations.

We’re famished and exhausted when we arrive. Both the beachside The Mermaid Restaurant and the Great House’s Wine Spectator-award-winning fine dining at The Terrace Restaurant offer excellent on-property dining options (which we’ll amply indulge), but for our first night, we opt for the more casual atmosphere of the Martel Lounge, a short walk from the ruins of an on-site sugar mill. Fall-off-the-bone tender ribs are glazed in a house-made pineapple-guava barbecue sauce prepared by the resort’s director of food and beverage. Live music plays as a gentle breeze blows in on the veranda where we’re seated, a reminder of the omnipresent trade winds that both moderate the heat and make this island popular with sailors. 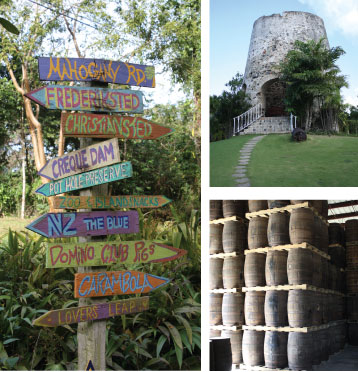 The Buccaneer features two pools and two white sand beaches—Mermaid and Grotto—with an ample inventory of complimentary kids’ beach toys, sea kayaks and the like for guests (plus the occasional iguana strolling by or climbing the palm trees).

And of course, there are cocktails. The Buccaneer specializes in vintage cocktails featuring local rum—drinks such as Raising Cane and Caribbean Sunset—prepared by head bartender Weston Huggins, who’s been serving up libations at The Buccaneer since 1960(!).

Though St. Croix is the largest Virgin Island, it’s still a diminutive 22.7 miles long by 8 miles at its widest, making it easy to explore, either through a combo of shuttle service from the resort to the nearby town of Christiansted and tour operators (for farther flung destinations), or in our case, with the use of a rental car. (Note: Though a US island, they drive on the left in St. Croix!)

We start in historic Christiansted, where the stately government buildings sit on King Street. An old fort is now a national historic site right on the waterfront, where we explore a battery of cannons, a dungeon and a kitchen. From the fort, a dock runs along the waterfront with many options for eats, including a brew pub. For truly local cuisine however, try one of the hole-in-the-wall joints off the water, such as Café Christine on Company Street (a tip I glean from a taxi driver). The downtown also features no shortage of art galleries. On the outer fringes of Christiansted, diverse restaurants range from Thai to American, Greek to French.

In between time spent lounging on the beach and sipping Huggins’ cocktails—the “relaxation” portion of our trip—we venture farther afield. One day, we head west to the Cruzan Rum Distillery, where Crucians (as locals are known) have been making rum from molasses since 1760. Then it’s onward to Frederiksted on the far western edge of the island, host to the island’s only major cruise ship pier. We purposely visit on a day when no ships are in port to avoid the throngs of tourists, but discover that most of Frederiksted is asleep on such “off” days. En route, we spy more sugar mill ruins like that of The Buccaneer—remnants of the more than 160 windmills that once dotted the island’s hills to mill sugar cane. Returning toward The Buccaneer, we take a narrow, winding road through the rain forest of the mountainous northwestern corner of the island, where the trees hang with vines. Along the way, we stumble upon the Montpellier Domino Club, featuring famous (non-alcoholic) beer-drinking pigs.

The next day, we trade the rain forest for the North Coast, where mountains plunge into the sea à la Kauai, Hawaii. Our first stop is Salt River Bay National Historic Park and Ecological Preserve. It hosts mangrove coastal forests and a bioluminescent bay—tiny microorganisms in the water glow greenish-blue in the dark whenever they’re agitated by kayaks, paddles, a hand dragged through the water, etc. The darkness of an evening tour during a new moon offers the best effect; I can’t help thinking of pixie dust from Tinker Bell, one of my girls’ favorite movies du jour. It’s a magical spot to pause for a deep breath of moonlight.

Nearby, we stop at the Columbus Landing Site, where Christopher Columbus himself set foot during his second New World landing in 1493. I stand on the same wind-swept beach at the mouth of the Salt River estuary that Columbus and his crew did, trying to imagine an old wooden ship anchored somewhere offshore, having just enduring a perilous trans-Atlantic crossing.

Soon enough, I’m back to reality, driving the coastal road followed by the St. Croix Ironman 70.3 triathlon. We pull off the road at Cane Bay, home of The Wall. Just 100 or so yards off the beach, the ocean floor plunges from 40 feet to 80 feet to three thousand feet deep. It’s one of the top dive sites in the Caribbean, and arguably, the world. We settle in for lunch at Eat @ Cane Bay, where the pulled pork sandwiches are rich and juicy, and the “Lime and a Coconut” cocktails go down way too easily. The al fresco dining also offers a great view of the beach, the Caribbean, and the constant ebb and flow of snorkelers and scuba divers funneling through a slot in the coral reef.

As our trip draws to a close, we treat ourselves to dinner at The Galleon at Green Cay Marina, east of The Buccaneer. It’s easily our best meal of the trip, the seared tuna, Caribbean lobster and fresh catch of the day are prepared masterfully. The sunset over the boats in the marina isn’t too shabby either.

Oddly, we’ve been looking forward to our last day all week long and finally it’s here: Buck Island Reef National Monument. Accessible only by boat, and established in 1961 by President John F. Kennedy, it boasts two must-see destinations. On its western edge, there’s Turtle Beach, one of the whitest white-sand beaches I’ve ever seen; I feel like I’ve stepped into an ad in a luxury magazine. On its eastern edge, it features an underwater snorkeling trail through an impressive coral reef, where I admire sea turtles as they leisurely glide by, but where the barracuda eyeing me with an icy cold stare causes a touch of concern.

We make the Buck Island voyage on the Jolly Roger, a 40-foot catamaran with a blue-and-white-striped main sail. As we’re heading downwind back to The Buccaneer, Buck Island slowly receding into the distance behind us, Captain Mike cues up “Southern Cross” by Crosby, Stills, & Nash on the boat’s speakers. I lean back against the gunwales, feel the sun beat down on my face and inhale the salty breeze.

St. Croix’s Crucian Christmas Festival celebrates its 60th anniversary, lasting through January 6. See the moko jumbies, costumed dancers on stilts, on parade. They are the official symbol of the US Virgin Islands.