An elegant way to pass the evening, whether it’s a group, the whole family or just the two of you, is via cruise. These ships circle Manhattan while guests enjoy a formal dinner and dancing (black tie optional). The skyline is part of the décor as the vista changes shape outside the windows or viewed in the open air on deck. Any ship worth its salt positions within view of Liberty Harbor to capture the midnight fireworks. Cabana Yacht, Harbor Lights, Jewel Yacht and NYE Cruise Circle Line 42 all offer a three-hour open bar or better, with general admission tickets starting at $135. Check websites for specific itineraries, menus, suggested attire, prices and details.

Long Island’s hotspots ratchet up their standard excitement to bang in the New Year with big crowds, big menus and big bar options. Guests will range from young and single to married forever depending on the venue. Dress to impress, but stay on this side of formal (gowns not required).
Specifics were limited at time of printing, check venue websites for details.

Four Food Studio
Broadhollow Road, Melville
The trendsetter “resto-lounge” is always doing something sophisticated, and New Year’s Eve is no exception. This is where the sexy and hip go when they can’t get a flight to Miami. Expect a five-course meal, a DJ and counting the ball down on a massive 12-foot wide screen.

Hendrick’s
Old Northern Boulevard, Roslyn
If a place could be an event, Hendrick’s would be a swanky, old school, Rat Pack sort of bachelor party (one that is good for ladies, too).

Jewel
Broadhollow Road, Melville
This newcomer balances posh and laidback perfectly. Bubbly in your glass and bubbly lights overhead. Lamps hanging upside-down over the bar, wine, wine wine, cognac room (for a private party of 20) and first-rate sea and steak on the menu.

Kpacho
Union Turnpike, New Hyde Park
Warm things up by partying south of the border, figuratively, at this Mexican-influenced restaurant and bar. Set the mood with margaritas and continue the festivities at their lower level bar, which features top shelf open bar and a DJ.

Rare650
Jericho Turnpike, Syosset
A triumph in contemporary design is the backdrop for a venue that makes every night feel like New Year’s Eve. You can imagine how much more intense the big one will be. As the name suggests, this is the place for steak and sushi celebration.

An oft-overlooked option for the big night is the thrill of a casino. It may not be a tony scene of white tuxedo jackets à la Monaco, but the area casinos offer the excitement of gaming tables, first-rate dining, concerts and dancing. And suggested attire is whatever you want it to be. No introduction should be needed to Connecticut’s Foxwoods and Mohegan Sun, or to Atlantic City’s Grand Dames (who shouldn’t need your help post-Sandy, but do). But your best bet may be on Long Island’s own Resorts World Casino. The venue is brand new, with the backing of world-class Genting Group behind them, and dinner at RW Prime Steakhouse and Wine Bar is outstanding.

Stepping up from the local restaurant, but not quite crossing over into formal affairs, are the events being staged by the Island’s great halls. Classic, elegant affairs that are likely to draw a more mature crowd (don’t expect to see throngs of college kids) to enjoy music, dancing and dinner. Virtually all offer premium open bar all night, multi-course sit-down dinners, champagne toast at midnight and dancing to either live music or DJs or both. Party favors, including funny hats, are usually supplied and some are family-friendly. Cuisine is among the best available. Others venues exist, but these are Pulse’s Picks based on reputation, service, standard of execution and, in some cases, first-hand experience. Ticket prices vary, check venues for details.

Carlyle On The Green
Quaker Meeting House Road, Farmingdale
A standard bearer for the island’s fetes, the Bethpage State Park venue delivers the country club atmosphere to galas of all flavors. This is their first foray into New Year’s Eve, expect them to outdo themselves.

Chateau Briand
Old Country Road, Carle Place
The island’s foremost Art Deco masterpiece. Stepping into the recently renovated lobby is the start of something special and the feeling continues through all of the ballrooms.

The Inn at New Hyde Park
Jericho Turnpike, New Hyde Park
A classic venue boasting cream and white tones. Understated and perfect for a large group of friends to gather around a table.

Lombardi’s
On the Bay, Patchogue
On the Sound, Port Jefferson
The eponymous venues live up to the family name. Stylish and first-class with a personal touch, their annual “Candlelight Ball” will take place on the bay and the sound (and also at Villa Lombardi’s) with an open bar, champagne, great food (of course) and a live simulcast of the ball dropping. 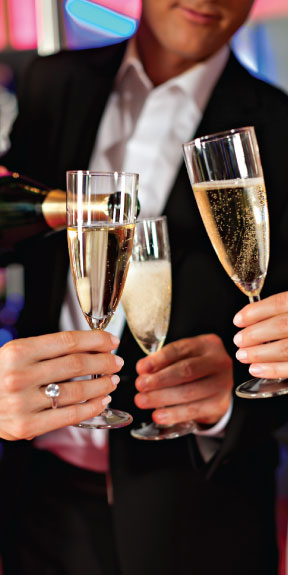 Watermill
Smithtown Bypass, Smithtown
A setting of lacquered woods, crème walls and rich tapestries. The room is set for a festive banquet and ready to be filled by understated sophisticates.

For those not into the party scene, NYE could be a night to ring in 2013 with great musicians or sharing laughs with a group of friends. Select performances are annual repeats of Pulse people favorites augmented by a few newcomers. Whatever your fancy, expect these last shows of the year to be memorable.

If you’re looking for something you haven’t done on NYE before, look no further. We’ve never even heard of some of these before. Well, actually, we never thought of them as an
option for the big night, that is.

Whether you wound up somewhere, having stayed for the night, or you wound up staying somewhere you shouldn’t have, it doesn’t matter—it’s time to eat. Brunch is calling. Text the friends you missed last night to meet up so you can compare notes and New Year’s resolutions over tequila sunrises and bloody marys. Reserve early to avoid getting shut out. The options are actually endless. Our advice is that you figure it out now, you’ll be too hazy by then and the waits will be ridiculous.

Hotel Parties
The ideal celebration is one that has you partying till you drop—and hitting the sack is just a few steps away. Long Island’s timeless inns and hotels offer dinner parties packaged with an overnight stay, turning the standard evening into a mini-getaway. Be honest, you don’t want to have to drive that night anyway. Attire is often semi-formal to black tie, dinner offerings vary and perks to staying over can be very enticing. Prices and specifics should be checked on venue websites.

East Wind, Wading River
All-inclusive package of dinner for two and an overnight stay, plus there is a fabulous spa on premises.

Gurney’s Inn, Montauk
The End’s hideaway is going James Bond for an hour and a half cocktail party, sit down gourmet dinner, open bar and dancing. Spa on premises offers a king-size indoor seawater pool and other bennies.

The Inn at Fox Hollow, Woodbury
Pre-party at their Vintage25, two tickets to the Fox Hollow Gala, then enjoy a luxurious overnight stay for two as well as breakfast at the Inn.

Montauk Manor
A castle-like escape tucked between dunes and rock—she is grand and she is intriguing. A range of amenities accompanies tickets to the fete.

For a dazzling night on the town, a Manhattan lounge is the way to go. Expect fashionable crowds, dancing and throbbing basslines pumped out by world-class DJs. Dinner is typically not served (it’s not about the food anyway), but (mostly) open bars are fairly standard. Ambiance ranges from Eurotrash to chic and cozy to vaulted and glamorous. Listed ticket prices vary considerably, from general admission to higher levels for longer open bars and VIP perks. A good resource is newyearsevecentral.com, but check venue websites for specifics.