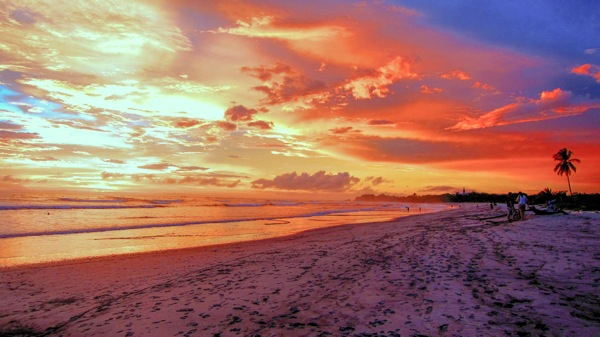 Nature is still running the show on Costa Rica’s Guanacaste Peninsula, a rugged nature sanctuary gracing the Pacific coast. At its heart is Nosara, a marine development, surrounded by verdant hills, nicknamed “The American Project” in the late 1960s. It’s still a beach town on a mission to never really have one because the founding fathers and mothers cleverly put the environment first. Bordered by a wildlife refuge, the town prohibits building 200 yards from the coastline, so the long, wide, fine-sand beaches are not littered with resorts or loud beach joints. While standing on the beach, you’d never know that anyone lived here. The best happy hour is on the beach; recurring parties are barefoot ex-pats and locals (incredibly friendly “ticos”) taking in nightly sunsets upon the sands of Playa Guiones. As evidenced by the hundreds of would-be visitors that have literally never left, this is a tough place for goodbye.

Nosara is renowned as the place to surf or more so, learning how to surf, because the manageable waves just keep coming. The constant, user-friendly breaks create, in my view, a rare ocean swimming phenomenon. Between the warm waves swimmers dodge, they end up in a blissful, crackling sea spa foam Jacuzzi for 30 seconds. Think: dive under or crash into a wave, Jacuzzi, another wave, Jacuzzi.

Nosara has everything you’d expect to find in a tourist beach town—fancy boutiques, fruit and fish markets, surf shops, and restaurants inspired by different corners of the world—but you’re a long way from paved roads, casinos, franchises, or bragging rights for the fanciest car. Here, vehicles with air intake snorkels looming above their windshields so they can drive in four feet of water get a tip of the cap.

You won’t see many swollen tummies here. Along with being a famous surfing Mecca, Nosara is a far-calling epicenter for Yoga. Yoga gurus teaching enthusiasts keeps pace with veteran surfers encouraging rookies. Here, the learning never stops. The slow season is equally blissful. Guanacaste’s summertime green season remains cooler than most of the U.S., uncrowded, and free of the dirt road dust that can fly during the drier season. Either way, this brand of tropics being rarely more than a five-hour flight from the U.S. is tough to beat. 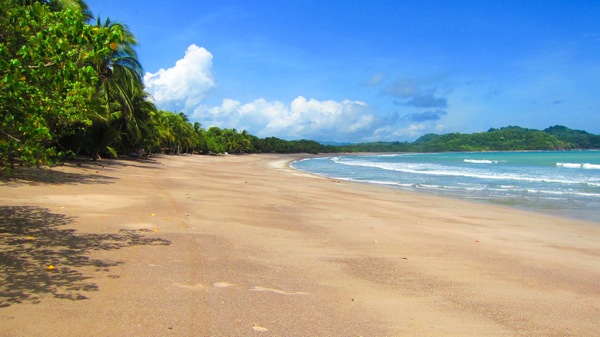 Mostly, it’s a place to relax. Sloths are revered here for their casual tree-hanging coolness. At first, when locals began calling one of my very mellow, sleepy-eyed pals a sloth, we thought he was being insulted. But they were all smiles; it means chilled-out, not lazy. Then we began seeing pictures of the heralded sloth everywhere in town, including a gigantic mural at the airport on our departure, so the new nickname stuck.

Nosara is an unofficial health campus with party options—a barrier-free resort. Talk about getting away from it all…I joined friends one night for a leisurely midnight lounge on the beach, where the lapping water met the sand. We laid there laughing at the moon, being baptized by the water. The next day, we learned that—simultaneous with our late-night oceanic recline—a tsunami warning was trigged by a strong earthquake off the coast of neighboring El Salvador. The warning was later lifted, probably just as we rose for a breakfast of handpicked fruit. 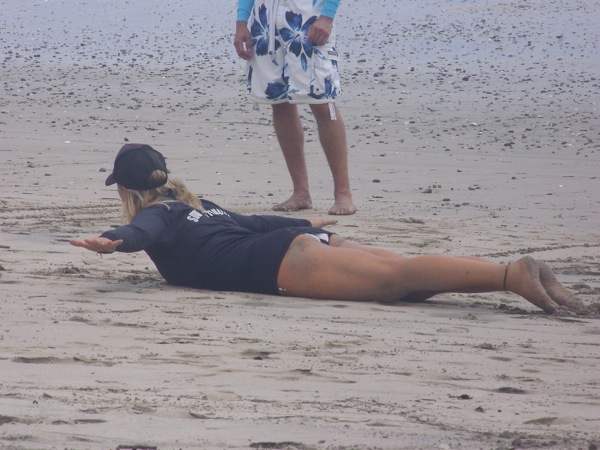 My surf lesson reminded me of how long it had been since I was tutored in anything. Veteran surfers tackled more hardcore breaks a half mile offshore while I congratulated myself for standing on the board until it hit the sand. The lesson was worthwhile for at least two reasons. It’s nice to spend time with a teacher who has no question about what they want to do with their lives. And, I probably wouldn’t have figured out that the most common surfing injury is not paying attention to where your board is until a passing wave whacks it into your face. 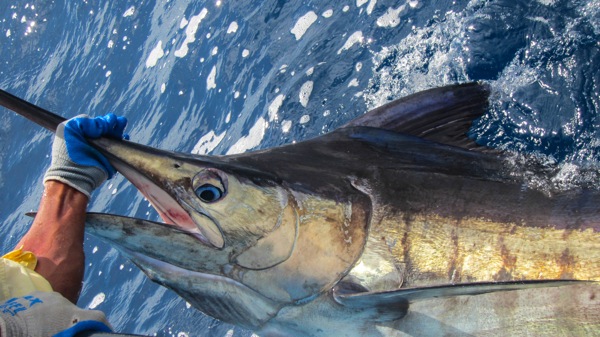 Sports fishing here is more than a 20-mile offshore troll. Yes, we did haul in and release a six-foot-long, 400-pound blue marlin, but we also communed with the Pacific as its hues changed from green to blue and back to green again. Nosara sits the closest to the offshore deepwater than any other Costa Rican shoreline. The four-hour communal with the rocking ocean was suddenly punctuated when that mammoth marlin sprung out of the water. Another pal hauled it in—note adrenaline rushes require nap time later—and our local fishing guide subdued it, so we could snap a few pix. At first, I thought the burly guide was showcasing his ability to manhandle the marlin with his bare hands on its razor-sharp foot-long bill. But, we later learned that it was a wrestling match intending to calm the flailing trophy until it gave up so he could remove the hook and release it safely. Cruising miles offshore Nosara’s mountainous coastline was an epic window into this regions’ grandeur. Like many rural Costa Ricans, our tico pilot and guide redefined cool but capable.

Yeah, it’s touristy, but flying high over jungle valleys and rivers truly rocks. 21 zip-lines provide up to two-minutes of racing quiet time over Nosara’s rainforest canopy. Adrenaline and breathtaking scenery blend well, and concluded with a side-hike to swim in a waterfall. The funny Miss Sky Canopy guides got the last laugh when they hooked me up to an ascending line (instead of a descending one) and watched me run toward an impossible uphill launch.

You don’t need an excuse to play in the mud. I come from a generation of suburbanites who, until reaching the age where girls were treated like boys, coming home from school covered in dirt was normal. It amazes me how you never see kids climbing trees anymore. Howling Monkey’s TomCars are savage, indestructible Jeep-like 4x4s on ‘roids that won’t tip unless you spill off a cliff. The two and four-seat muscle buggies can literally climb anything, navigate water, and, as the smiling locals noted, chicks dig them. Because I was raised by environmentalists, I initially worried about scaring wildlife, but the pelicans and flamingoes we visited barely batted an eyelash. Any dirt we skidded out of place would be restored by the next rainfall. Adrenaline aside—they also go fast—this Nosara backroads tour visited waterfalls, scenic pastures, and breathtaking mountaintop views of the Pacific. 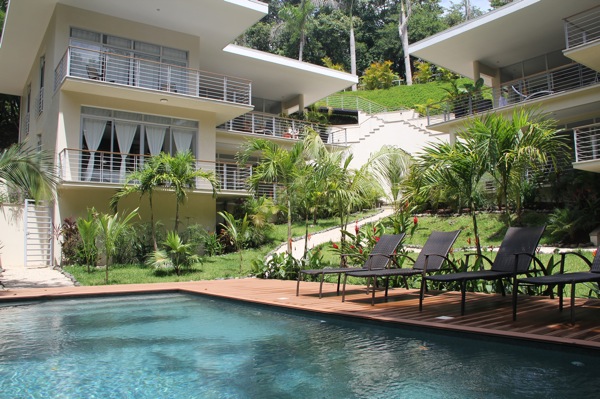 Namaste Oasis—view from their private pool

There’s a lot to do here, but you’ll need rest too. It’s nice to lie in a clean king-size bed with high-thread count sheets and watch monkeys swing in the trees. Namaste Oasis is the coolest pad in Nosara’s jungle. This boutique resort is a 10-minute shaded walk to the beach. Its two sleek, two-story hillside buildings create four 1000 square-foot ultra-modern two-bedroom condos with grand balconies overlooking a freshwater pool. Or more simply, it’s a private resort with four swank garden apartments. Here, maid-insured cleanliness, working modern appliances, and dependable everything is a rarity. The four units recall something you’d find in the Hollywood Hills, except that you’re at the end of a dirt road while the howler monkeys do their thing: howl. I catch one cold a year, and it’s usually from air-conditioning. Keeping the walls of sliding glass doors open, I encountered no bugs, only sunrise jungle sounds—and the huge, accessible balcony seems to double your square footage. The full kitchen is an ideal place to cook the one-dollar lobster tails from the local market.

Ps, Sloths rule. See you on the beach for sunset.

Visit namasteoasis.com for rates and motivation on custom surf lessons, and everything else. fishingnosara.com redefines a day on the Pacific. 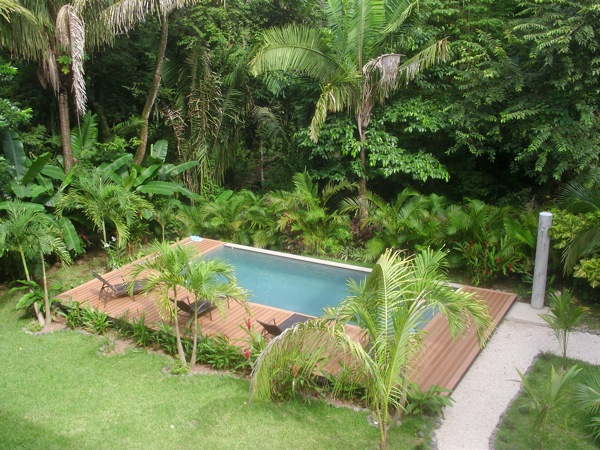 Costa Rica’s new Liberia Airport is two hours from Nosara and offers many direct flights from the U.S. From Liberia, rent a car or arrange for a 4×4 SUV pickup via Namaste Oasis. There are on-call taxi-vans in Nosara, along with plenty of bikes, ATVs, and golf carts to rent. 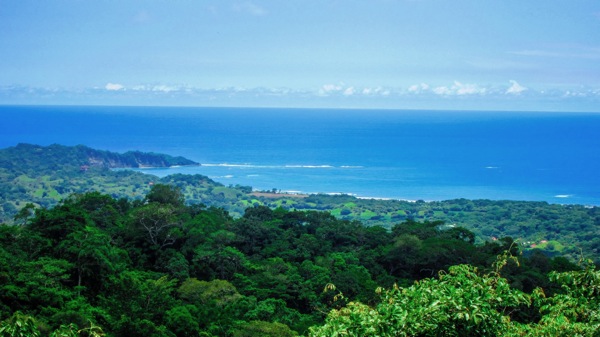