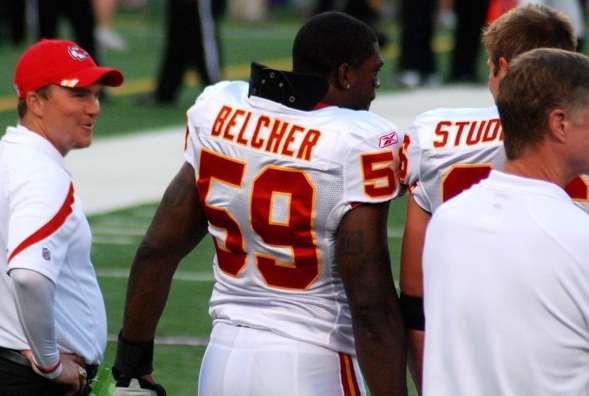 According to reports, Belcher murdered his girlfriend Kasandra Perkins, 22, at his Kansas City home, then drove to Arrowhead Stadium and committed suicide in front of Chiefs coach Romeo Crenel and Chiefs general manager Scott Pioli. He was 25 and leaves behind a 3-month-old child, according to authorities.

Belcher, who started 10 games for the Chiefs this season, graduated from West Babylon in 2005 and led the Golden Eagles to a 9-1 record. He was also a three-time All-American wrestler before starring as a linebacker at the University of Maine. He signed as a free agent with the Chiefs in 2009.

Chiefs chairman and CEO Clark Hunt released a statement about the incident: “The entire Chiefs family is deeply saddened by today’s events, and our collective hearts are heavy with sympathy, thoughts and prayers for the families and friends affected by this unthinkable tragedy. We sincerely appreciate the expressions of sympathy and support we have received from so many in the Kansas City and NFL communities, and ask for continued prayers for the loved ones of those impacted.”

The NFL also released a statement: “Our thoughts and prayers are with the Chiefs and the families and friends of those who lost their lives in this terrible tragedy. We have connected the Chiefs with our national team of professional counselors to support both the team and the families of those affected. We will continue to provide assistance in any way that we can.”