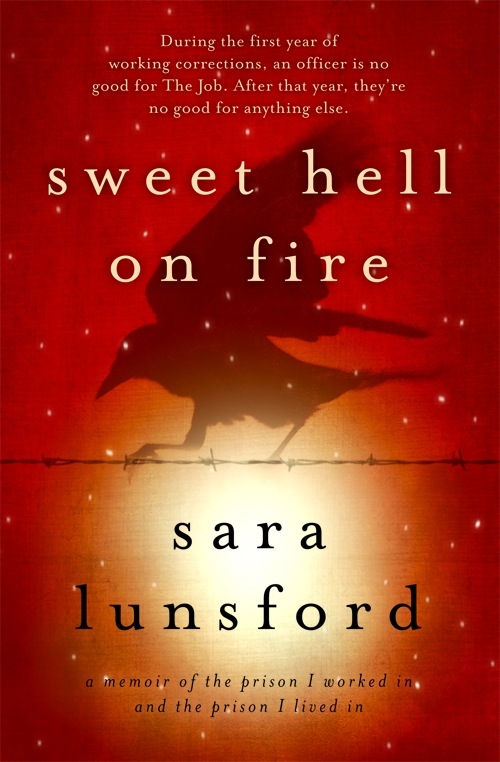 Your hands were tied – quite literally.

It wasn’t a very comfortable position to be in, either. The zip-strip holding them behind your back cut painfully into your wrists, twisting your arms to one side, and the red-and-blues gave you a headache. Nobody seemed to care.

Being arrested is not an afternoon on the couch, you know. Likewise, it’s not a cakewalk for those on the other side of the bars, according to Sara Lunsford. In her new book “Sweet Hell on Fire,” you’ll read about life in prison, and out.

Sara Lunsford was a “retread.”

She’d worked at a state prison before this book begins but, as a retread, she was “dumb enough to come back for another round.” Working in the prison made sense, however: her father had done it and her husband worked there, too.

Some 2,300 inmates on four levels of custody were housed in this prison in which she toiled – all of them men, which was the way Lunsford preferred it. Any officer, she says, will tell you that women inmates are “tougher, meaner, and harder to handle.”

That notion belied her first day, though: there was an “incident” in the yard, in which “a lock in a sock” killed an inmate and Lunsford learned that human brain matter stained a poly-cotton blend uniform permanently.

Still, despite similar dangers, Lunsford liked her job and her co-workers. She knew from experience that she might come to like some of the prisoners, too, but there were lines she’d never cross. She’d never be “dirty,” never smuggle drugs, never have a relationship with an inmate, never trust the murderers, sex offenders, thugs, and thieves in her care. She had to be hard but she had to be fair, too, because a fair officer was a respected officer. Respect often meant safety.

By the end of the first week back on the job, she started drinking.

Within two weeks, she was invited to apply for a promotion. Her shaky marriage started to chip. She moved in with her parents.

At six months: “I didn’t want to be angry anymore.”

At ten months, she was drinking heavily.

And at one year, after an incident that almost cost Lunsford her life: “I was done.”

Did you ever read something that you never wanted to end? Yep, that’s what it’s like with “Sweet Hell on Fire.”

Bawdy and profane, author Sara Lunsford romances readers with softness sometimes, making us chuckle, making us double-take. Then she grabs us and shakes hard, until we can’t do anything but gasp.

That, and what ultimately happens in her story, will make you squirm; it’s hard to look but hard to look away from the edginess that simply won’t let you go.

And that’s exactly how you’ll feel when you start this book: you won’t want to let it go. If, in fact, you’re a true crime fan or a reader who wants a tough memoir with plenty of swagger, then “Sweet Hell on Fire” is a book to get your hands on.