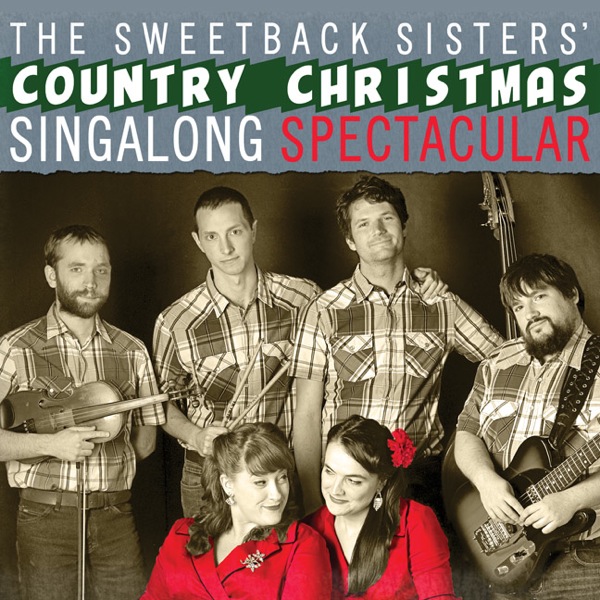 From “Nine Days of Christmas” by The Sweetback Sisters

The Sweetback Sisters were named after 50’s country duo The Davis Sisters, who also weren’t related and wore matching outfits. And “sweetback” came from a dictionary of hobo slang, referring to someone trying out the vagrant life—quite apropos for touring musicians. The Brooklynites, who have performed for Garrison Keillor on NPR’s “A Prairie Home Companion,” play vintage country music, or “honky-tonk for the modern-day cowboy and girl.”

For the past three years, the Sisters have been spreading holiday cheer along the east coast with their Singalong Spectacular, which involves audience participation (lyric sheets are provided) and a love for holiday music with their signature mix of crystal clear harmonies, fiddling and rockin’ telecasters. The success of the live singalongs—20-somethings and seniors singing their hearts out—led the band to record 15 old and new Christmas classics entitled The Sweetback Sisters’ Country Christmas Singalong Spectacular.

It was Christmas in July when the disc was recorded. Made over two sizzling weeks in a Philadelphia studio, the band put up tinsel and a Styrofoam snowman to get them in the Christmas spirit. You can find renditions of everything from The Davis Sisters’ “Christmas Boogie” to Loretta Lynn’s “Happy Birthday, Merry Christmas, Happy New Year” and “Walking in a Winter Wonderland.”

But there’s no better way to experience the fun of a Christmas singalong than to see it live where it first originated at the Jalopy Theatre in Brooklyn. You can expect the girls to be decked out in their “holiday finest,” says Bode, who has a vintage sensibility and picks out their matching dresses to go with the proverbial cowboy boots. One of Bode’s favorite tunes to sing is “Christmas Island,” about a canoe ride through the tropics:

“Even though my family is 3000 miles away in California, when everyone sings along to this one it’s as if they’re right there in the room with me. Emily and I get choked up at least once during the New York shows. Sure, we’re cheese balls, but there is something pretty magical when friends, family and strangers all come together and sing.”

And will there be any special guests?

“There’s only one person I’m really hoping comes to the show,” reveals Bode. “Anyone who arrives in FULL Santa garb from boots to belly to beard can have my spot on the guest list.”

So take note and
head to the Christmas Singalong Spectacular at the Jalopy Theatre in Red Hook on Friday, December 14th and Saturday, December 15th.