My family house on Long Island is still littered with bins and boxes. Outside, two piles of tree branches are another reminder. A morning jog on the beach required a hop-down three feet; the steps are gone. What remains in the garage has been moved into the middle, awaiting the contractor to start work. My Corrado is at a friend’s house, getting prepped for yet another surgery session, this one its last. These are the reminders of what my girlfriend (Gail) and I did just over a month ago, in the midst of Hurricane Sandy.

For three hours we waded back and forth between the garage and the house, floating bins and boxes on top of three feet of water, saving and salvaging was what logical, pertinent and accessible. Flanders Bay rose eight…8….feet on Monday October 29th, 2012. The garage flooded with two feet of water. The house, fine, my mother’s decision to build it, back in 1995, three feet above the 100-year flood plane, justified. Gail and I cut down two trees, so we could tow the Corrado off the property, with my mom’s Rav4, through a neighbor’s yard. In typical Corrado fashion, it chose not to start at the most in opportune time. 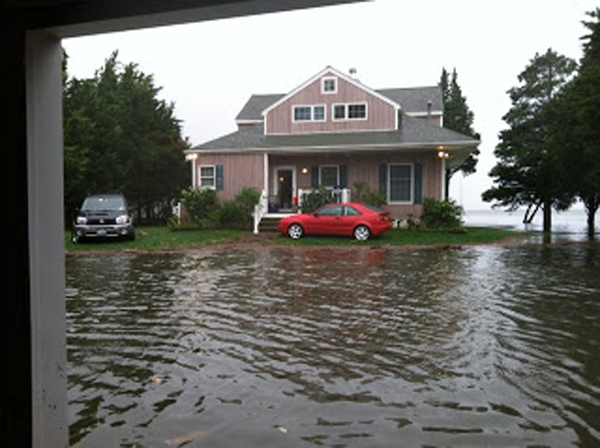 The only safe haven.

Tuesday morning, it was as if nothing happened. The skies were clear. The beach cleaner that ever, and the lowest tide I can remember in twelve years. The only evidence was branches, grass cuttings and cedar needles creating a perimeter around the house, lining the garage walls, showing how high the water had come. A wood arm chair was in a neighbor’s yard, the matching rocker two properties over. In retrospect, the drastic change in weather from the 29th to the 30th, served as the perfect metaphor.

Despite my best of intentions, our new, much larger garage had become the typical American garage. There was barely enough space for the Corrado, and no space for my mom’s Rav4. I had originally billed it as The Man Cave, equipped with a sofa, an arm chair, microwave, TV and my dad’s 30-year-old Yamaha component system. Storage bins with car parts took up the bulk of the space. Other larger parts were haphazardly strew about, waiting for the time when the Corrado was complete and I could sell off what I no longer needed nor wanted. Bins and boxes filled with sentimental trinkets and childhood toys were destined for a future home, along with other more current possessions; stuff I had not looked at nor thought of in at least three years time. The garage was begging for a Spring Cleaning. So it got one in winter. 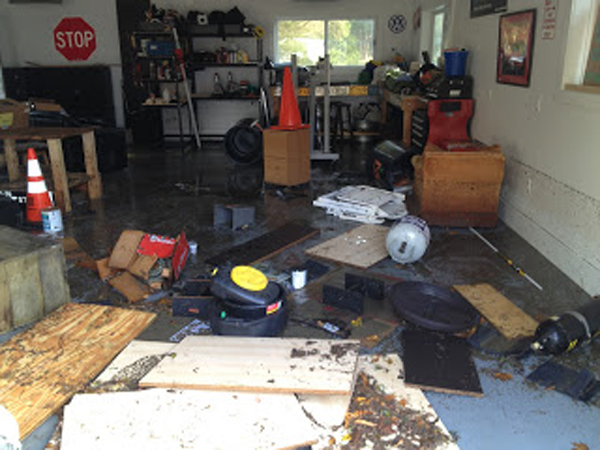 Sandy had a unexpected anticipated, of course unplanned, affect on a lot of people. Never-mind neighborhoods and properties being destroyed, those are material, and to a certain extent, replaceable. What was neither planned nor anticipated was the levels of human interaction and reflection that bubbled to the surface. Strangers came from all over to help those in need – Arborists and Electricians from Tennessee and Georgia, construction companies from New Jersey handling Staten Island clean-up, neighbors you never knew you had, lending a helping hand.

“…I think in time I’d like to come to reflect on 2012 as s year of brotherhood. People offering strangers a place to stay, neighbors sharing everything down to the last licks of gas…kids learning about putting themselves aside…to help someone who needs it more…

“…great tragedies…starts with some wave of energy, vacuum and forceful. It sweeps over a place, embroiling the people, washing their things away. But they find out their dreams survive. Their handshakes, their smiles continue. This is not new; it’s a cliché because it always happens. And it is true…because it is true of people…

“…I saw my neighbors more in the last month that in the last year. We exchanged awe at the natural phenomenon and offered each other gas, tools, wine, information…I want to tell you about all of this, but at this frosty moment, some are still without heat. I can’t change that. I can just think about it and maybe be a little nicer on the LIE (though not necessarily slower). I can be a little more patient at the coffee shop. Maybe I can even step across the lawn and check on my neighbors a little more often. This is the intangible gift we are all receiving for these holidays..”

I met a neighbor from two houses over that I had never met. We exchanged numbers, and now will no doubt meet in the near future. Another neighbor, whom I don’t particularly care for, put aside past arguments and asked if I had a generator. I did not. Sandy became a talking point, a way to break the ice, not to dissimilar from the “How was your summer?” introduction from grade school. It bridged gaps, made connections. It sparked a much needed introspective and early Spring Cleaning.

The amount of disorganization within the house prompted a mission to go through and assess the multitude of belongings now clustered together. It is easy to forget what you have in storage when it is tucked into a garage, and spread out over numerous Rubbermaid bins. Bringing in the larger TV from the garage sparked the idea of rearranging the upstairs, keeping the larger TV in the house and moving the smaller one to the garage. That opened up space to build a much-needed book shelf for my constantly growing magazine collection, made up chiefly of Automobile Magazine – my dad was a charter subscriber, and I have all but five issues since April 1986. 310 issues and counting. Mixed in are some past issues of Sport Compact Car (R.I.P.), SuperStreet, Turbo (R.I.P.), Import Tuner, and Performance VW. I was up until 3:30am organizing all the issues into chronological order. I went through the animated TMNT, Smokey and the Bandit, and The Matrix over the course of six hours. 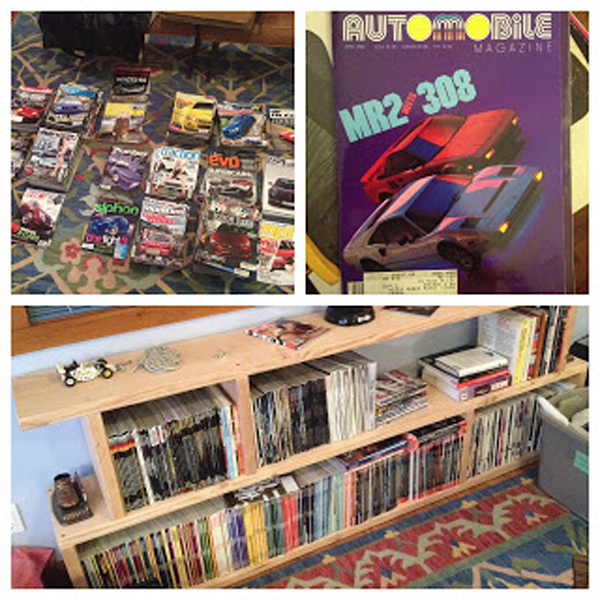 The garage will be re-imagined as gasp! a garage. The smaller TV will now be wall mounted. Gone is the sofa, arm-chair and IKEA furniture, freeing up valuable floor space. My mom will now be able to park without issue, and the Corrado will enjoy a larger work space. Work benches, tool boxes and shelving will be reorganized to maximize working space and efficiency.

I went through clothes I had neither seen nor thought about in more than two years, setting aside the bulk of it for donation. Thirteen pairs of shoes, old electronics and old stuffed animals followed suit. The entire process was hugely cathartic. It renewed a mission and goal to reinvent myself, not in personality, but in approach and mindset to everyday life. I quit my RedBull-and-Snickers habit, been to the gym at least three times each week for the last three weeks. I have lost 11lbs, relieving 44(!)lbs of pressure off my ever-problematic knees; I will play basketball again. I have organized my closet, cleaned off my desk, and organized business expenses.

With one month left in 2012, I still have ten storage bins to go through, consolidate, and continue with my Winter Cleaning. The days are already brighter, 2013 seen clearly in on the horizon.