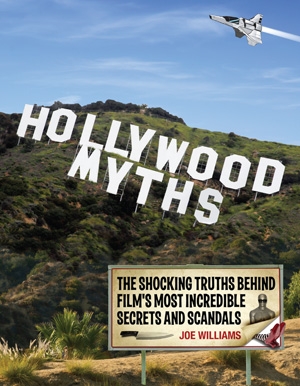 It’s only because of special effects.

That’s one of the things that enters your mind when you’re watching a movie. Humans can’t fly. They don’t usually live in luxurious spaceships, meet only pretty girls, transport through walls, drive magic cars, or turn into werewolves. Nifty tricks, no doubt, thanks to a first-class special effects department.

So what other Hollywood creations do you question? Which Tinseltown beliefs make you a disbeliever? If La-La Land fills you with wondering, the new book “Hollywood Myths” by Joe Williams may lay your celluloid fears to rest.

The tabloid headlines scream about the latest scandal, but you just roll your eyes. How is it possible that stars think they can do that stuff? Joe Williams indicates that you should take it all with a teaspoon of skepticism.

John Wayne, for instance, wasn’t a “hero” in the newest sense of the word. With the help of his studio bosses, he never actually fought in battle. That “weighed heavily upon his conscience for the rest of his life.”

Charlie Chaplin, says Williams, wasn’t the King of the Silent Era; he was, however, king of preserving his own film. That’s why we see so much of his work, which leads to the myth of royalty. As for the King of Rock & Roll, can you imagine Elvis in West Side Story, or starring opposite John Wayne or Barbra Streisand? That almost happened, until Tom Parker put a stop it.

The tabloids like to dupe you with scuttlebutt, but Williams proves that rumors are often misleading. Woody Allen, for example, was innocent (although Angelina Jolie owes Mia Farrow a “thank you”); Lana Turner was innocent (says her daughter); Fatty Arbuckle was innocent; Jean Harlow was innocent; and Spencer Tracey never married Katharine Hepburn, but not because of his Catholicism.

And then there are the Only-In-Hollywood scenarios: Brian Keith may have “followed in his stepmother’s footsteps.” Harrison Ford may have secretly been a child-star. Ginger Rogers was the only one of Fred Astaire’s partners who “never cried from the workload.” Jayne Mansfield’s IQ equaled that of Darwin. And the filming of Casablanca was a first-class mess.

But really – does all this actually matter? It is, after all, only the movies. It’s all just make-believe, right? And besides, says Williams, Hollywood isn’t the film capital of the world anymore anyhow…

Oh, my. I wanted to love “Hollywood Myths.” I really did.

But I didn’t love it as much as I wanted to because it’s filled with a lot of common knowledge, red herrings, and scandals that are older than Grandma. Rehashing the ninety-year-old Fatty Arbuckle scandal, for instance, offers nothing new. A chapter on Sharon Tate is really more about the Manson Family. And old rumors about The Wizard of Oz? Yawn.

Yes, author and film critic Joe Williams offers several nuggets of WOW! here, but mostly what you’ll find are retreads and continuity mistakes that didn’t impress me. Faithful tabloid readers might find enjoyment in that, but for most H-wood observers, “Hollywood Myths” isn’t anything special.