Go ahead, be 15 again. You remember? Sitting behind the wheel of your dad’s car, a ride you truly believed might one day be yours. Recall the smell of the vinyl seats, the ashtrays and the feel of the knobby steering wheel. Maybe you invited your friends into that bad boy at night and blasted David Lee Roth—still parked, of course. Looking back, especially since you never did get that car, you realize that dreaming was the best part. So lean back in your swivel chair, put your feet up on your desk, loosen your tie and imagine yourself in one of these glorious machines. As Roth used to sing, “Hey, you never know.” 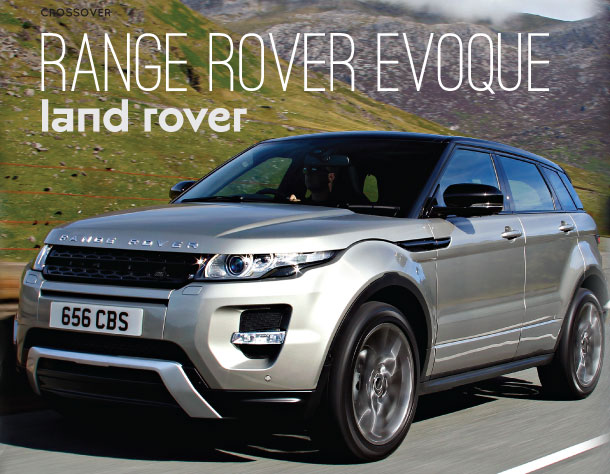 Picture kicking up sand on Southampton’s Shinnecock beach in a crossover that sparkles like the Atlantic Ocean, spending the day fishing the surf with friends, and on the way home, popping the convertible top down and burning cars off the line at lights—just to keep the laughs going. That’s all possible in the 2013 Range Rover Evoque (except for the convertible part, that’s still a concept), a crossover that can hit 60 mph in about seven seconds. Too painful to think about summer when the warm months are so far away? You know the Land Rover pedigree; these things can climb anything. So load your Evoque with some ski gear and your favorite snow bunny and head up to the mountains (find one on page 137). No matter the terrain, driving will be a piece of cake. For the not so adventurous, the Evoque will break you out of that shell. Its unique look, especially the coupe, is a real conversation starter. And the inside is comfortable yet luxurious and equipped with modern gadgets like park assist technology (new for 2013), climate control for the rear seats and an 8-inch touch screen. That means little stress during lots of trips in supreme comfort. You’ll soon find yourself wanting to stay in your Evoque longer and longer. Then longer still. Now you’re going somewhere. 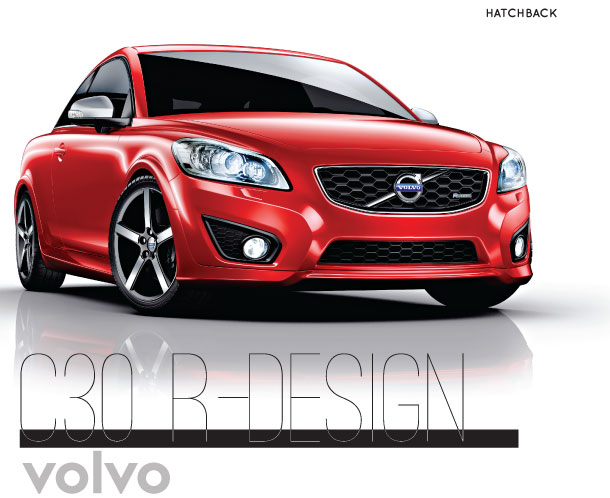 WHIPS and SIPS. Sounds like an EPMD song or an epic night in the city, right? Actually, it’s Volvo speak for safety. This stylish, road-hugging hatchback is replete with features meant to keep us alive, namely Volvo’s patented Whiplash Protection System (WHIPS) and Side Impact Protection System (SIPS). It’s also got enough airbags and inflatable “curtains” to transform its cabin into the inside of a bounce castle upon impact. You’ll be safe in there. The C30, unlike the rival Mini Cooper, isn’t something you see everywhere. And if you happen to spot one on the street, especially in the top-of-the-line R-Design trim package, safety will be the last thing on your mind. This thing is gorgeous. Certainly not a soccer mom’s old Volvo wagon or that Ford Escort you used to putter around in during your college days. Modern yet retro, the C30’s most distinct feature is its throwback glass rear hatch modeled after Volvo’s P1800 ES wagonettes of the 1960s The hatch is also somewhat reminiscent of the AMC Pacer of the 1970s (think Wayne and Garth’s Mirth Mobile from Wayne’s World). 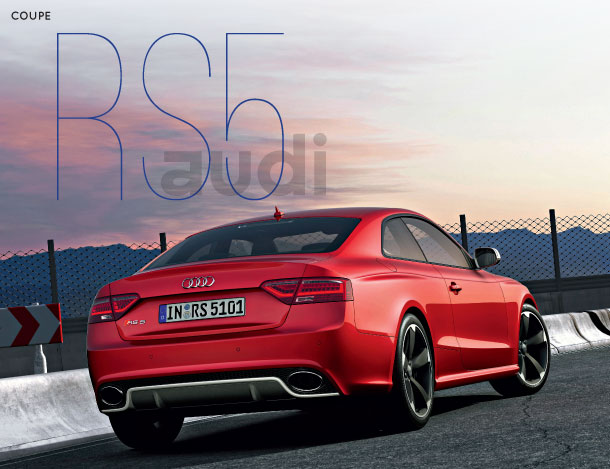 They’ve got stuff over in Europe we wish we had here: The siesta, a proliferation of nude beaches, a medieval dungeon or two and absinthe all come to mind—real absinthe, not that wormwood-free stuff. Another item Americans have been sweating the last few years is the Audi RS5. Well, sweat no more. The 2013 model, a modern, muscular specimen of a sports car with a throaty 450 hp V8 engine is now available stateside. Like the European version, this thing is fast, with speeds topping out at 174 mph. News of the RS5 release came as a great delight to the many admirers who’ve been longing for, among other things, an all-wheel-drive system that’s exclusive in this car class, which includes the BMW M3 and Jaguar XKR coupe. The more distinct Audi is etched out with a deep chin spoiler and a large, almost Bentley-like honeycomb grill, as well as an automated rear fin that pops up at high speeds and retracts when things calm down. But don’t get too excited. The bad news is only 1,500 RS5s are expected to cross the Atlantic, so many uninspired Americans will have to keep schlepping around in those all-too-common M3s. Poor souls. 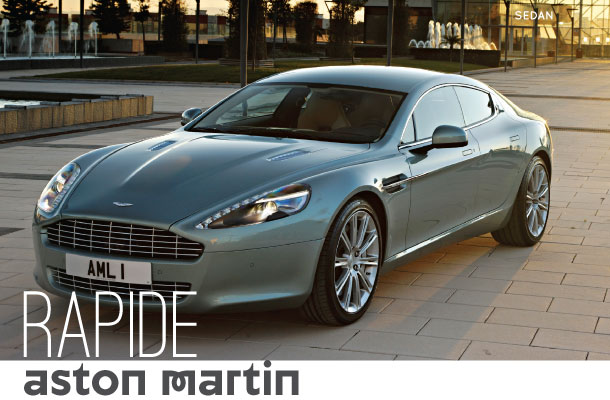 Widely considered to be the prettiest four-door on earth, the Aston Martin Rapide, introduced in 2010, has taken some lumps from critics over lower power and a higher price tag when compared to its chief competitors. While the 2013 model gets a modest power boost, the starting price still comes in at over $200,000. But this is an Aston Martin, after all, which means much of it is hand-built, including the engine and interior. No Aston comes cheaply. The new Rapide’s body is very similar to earlier models. The sedan’s touted design includes a rear that’s wide and big and bold, large-yet-slender headlamps that bookend a long hood, and its four doors are seamless and sleek to maintain that sportscar look Aston Martin is going for. Put it this way, despite what the critics say—and many are in love with this car—if a 2013 Rapide were to roll onto the cobblestone courtyard at Huntington’s Oheka Castle alongside a Mercedes-Benz CLS63 AMG or Maserati Quattroporte GTS, it would be the Rapide that stands out. That’s what that extra $70-$100K is for. When it comes to ultra-luxury sedans, you don’t get more ultra than this. 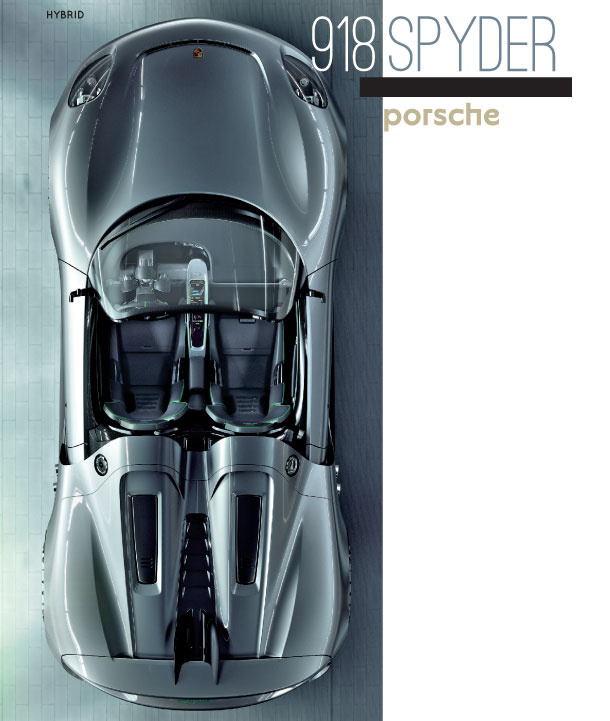 The 918 Spyder is what you’d call a game changer—the type of machine that forever alters an industry, like the iPod or the lightbulb. The 770-horsepower 918 is just as fast and powerful as many of the top-performing supercars in the world. Yet, believe it or not, it’s a plug-in hybrid. A toy at heart, the Spyder is expected to sell for $850,000 when it hits the market in 2013. Batteries included. Why so much? The German automaker is about to make its hybrid predecessors look like relics overnight. Consider: The 770-horsepower Spyder exercises 0-60 in under 3 seconds, yet with a combined city/highway of 78 mpg. The eye-popping combination of power and fuel efficiency is made possible because of feats of science and engineering—a body made completely from ultra-light carbon fiber reinforced plastic, and adaptive steering and adaptive aerodynamics, to name a few. The 918 also features a unique “hot-V” upward-venting exhaust system designed to keep engine heat away from one of the batteries. The exhaust pipes make the car’s rear resemble the Batmobile of the 1960s. With a jaw-dropping gorgeous design to boot, Porsche is about to prove the world an electric motor doesn’t necessarily mean sacrificing performance or style. And that’s a revelation.

Karma Fisker owners smirk during gas crises. Of course the Karma is a six-figure luxury sports car, so their owners can smirk through a lot of things. But the über-rich are people too. They care. They read the newspapers and know the US is low on jobs and has to wean itself off foreign oil. That’s why they buy this eco-friendly, plug-in electric hybrid produced by an American company. No other reason. Well, maybe some other reasons, First off, the Karma is trendy as hell. It’s favored by music and Hollywood elite such as Justin Bieber and Leonardo DiCaprio, and appears as Ashton Kutcher’s ride in Two and a Half Men. The Fisker is also set to make a cameo in the upcoming Harrison Ford thriller Paranoia. Tinseltown good looks aside, it delivers real sportscar performance (403 hp, 0-60 in 6.3 seconds) along with environmentally friendly features that go beyond its engines. The car’s interior is fashioned with wood trim made from forest fire-salvaged trees and a choice of either microfiber Eco Suede or two-tone “Happy Cow” leather, which is made from naturally deceased cows. They say it’s hard to maintain wealth and a clear conscience. At a combined city/highway 53 mpg, the Fisker might help with the balancing act.