Our adventure began riding down a muddy, puddle-filled dirt road behind a guarded entry gate designed to keep the elephants in and the poachers out. It was mid-September, the beginning of South Africa’s spring, and a year’s worth of rain had fallen in the past three days. We didn’t know it yet, but in the next 72 hours we would watch trees bud, flowers bloom and animals prance with pleasure as they drank from full-to-the-rim ponds.

On the slow, muddy crawl, we viewed a jaw-dropping number of nyala and various other antelope, a family of giraffes, baboons, buffalo and hideous wildebeests. We also spotted a Martial eagle overhead, flying to its treetop perch. It was thrilling and our safari hadn’t even started yet.

Going on safari was never on my bucket list, but the opportunity to spy Africa’s Big Five—lion, leopard, elephant, buffalo and rhino—thrilled me. A trip to South Africa afforded the chance to experience The Homestead at andBeyond Phinda too, a top-rated wildlife camp on a private conservation development in KwaZulu-Natal.

We followed arrows carved on wooden camp-like road signs for much of the reserve’s 30-mile length. When we finally arrived at The Homestead, our architecturally stunning home for the next few days, everyone—Nicci (innkeeper), Mark (ranger), Skampu (tracker), plus a full house staff (chef, pastry chef, butler and housekeepers)—lined up to greet us. The sprawling four-bedroom villa, one of six luxury lodges strategically scattered throughout the wildlife park, was designed for a family or small group. The magical, glass-walled bedrooms, each with enormous bathrooms fitted with glass-walled showers and a soaking tub positioned to view private decks and scenery, were as grand as at any posh city hotel.

Mark, our enthusiastic naturalist, described the daily routine: A 5:30am wake-up call and light buffet, then a three-hour sunrise morning trek, a post-trek brunch, a long, late lunch, a three-hour sunset journey and finally, a fireside dinner party. In between, there was time to soak in the tub, answer emails and relax. Mostly we ate. Wild animals weren’t the only ones feasting.

During each trek, we explored one section of the 56,800-acre preserve by following narrow dirt lanes that intersect throughout the pristine wilderness. They cut through the South African Sand Forest over the rocky hillsides of a mountain range to broad-leafed woodlands, marshlands, rivers, acacia grasslands and lala palm velds—rare habitat indeed.

Skampu scouted from his post—a jump seat affixed to the hood—while Mark alerted us to sightings: “Antelope to the right! Look at the giraffe family, aren’t they graceful? The baby is so young, it still has its umbilical cord.” We adjusted our zoom lenses. “Look, there’s a cheetah on the hill!” 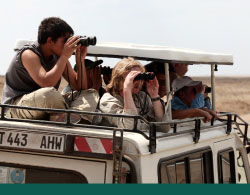 Nyala leapt like graceful Fire Island deer. A family of elephants plodded by. The mother, concerned that the father wasn’t protective enough of the calf, returned to fetch it. We spotted buffalo, a cheetah with a cub, two white rhinos and a dazzle of zebra, as well as kudu and suni, two types of antelope I never knew existed.

Once we paused to watch a female lion gnawing on a nyala leg. It seemed more natural than creepy though the possibility existed that we might have seen that very same nyala earlier.

On one jaunt, we searched for a pack of nine wild dogs that a ranger spotted the evening before. Mark was eager to find the newcomers, which are rare on the reserve. It was the first time in his five-year stint at Phinda that more than two dogs appeared at the same time. He assumed they crawled through a warthog hole under the fence.

We found the canines running in a tight pack right on the road, two three-legged dogs keeping up the pace. They were playful as pups until one of the three-legged ones disappeared and we heard a sad, mournful howl, first from one and then another. We searched for “number nine” with binoculars, but without success. They were still baying for their lost comrade when we left the area.

Between these bouts of high excitement, we stopped to celebrate sunrise and sunset. In a New York minute, Mark set up a folding table, covered it with a tablecloth and topped it with an ice bucket, glasses and an array of beverages. One evening, he slowed the 4×4 to a halt in front of a “champagne tree” where two coolers hung from branches, one with the bottle, the other with glasses.

On our last sunrise safari, Mark announced that a tracker spotted large male lion prints, a rare occurrence in a reserve of mostly female lions. The rangers didn’t admit it, but they all competed with one another and Mark was determined to be the first to find this lion.

Mark and Skampu were joined by Andrew, a ranger visiting from a Phinda reserve near Johannesburg. Once in the Toyota, their anticipation was palpable. Within minutes, after a wordless exchange of hand signals, all three dismounted and set out on foot, committed to track their prey. Mark grabbed his rifle, Skampu, his panga (a long, machete-like knife), while Andrew held a skinny, seemingly insignificant baton (a toy-like instrument that hardly qualified as protective gear).

Skampu was first to notice the disturbed warthog burrow and the flattened trail leading away, a sure sign a lion had dragged away a carcass. They followed the sandy path and tracked the paw prints to a grassy field where the lion was resting. Before long, they rushed back to the vehicle, flushed and triumphant with their success and eager to show it off. “We have to hurry, soon the sun will warm the lion and he will move into the shade and we might not find him,” Mark said as he gunned the Toyota through the bush over dead trees and rocks. “Duck for the branch!” Move to the left! Hang on!” Within moments, we were ten, maybe fifteen, feet from the drowsy lion lounging in the tall grass, the carcass in the nearby brush. He looked up at us from time to time until his eyes drooped and he dropped his head for a nap.

Months later, I can still see that lion’s expression. There’s a truth about travel; it’s mind altering. Places you previously didn’t know existed leave indelible impressions. People who you’ve just met soon matter. Animals you’ve never heard of fascinate. New concepts creep into the psyche: The Serengeti Wildebeest Migration, Tiger Safaris in India, Elephants in Thailand. Phinda may not have been on my bucket list, but it has created one.

Safari Lingo
I’d heard of a “pride” of lions and a “pack” of wild dogs, but not a…
Business of mongoose
Coalition of cheetah
Crash of rhinos
Dazzle of zebra
Flock of tourists
Herd of antelope/elephants
Journey of giraffes
Leap of leopards
Parliament of owls
Troop of baboons