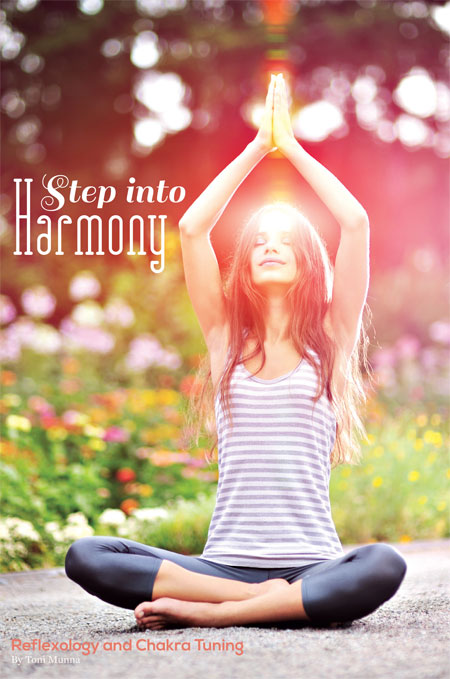 Chakras are believed to be spherical life force energy centers emerging from major nerve ganglia connected to the spine.

“The purpose of chakra balancing is to release blockages that are created from negative and traumatic experiences.” Woah, I thought. Weird. Baloney, too, probably. I simply smiled at Christina, Breathe the Spa’s reflexology chakra balancing practitioner, and politely took off my shoes and socks as she asked, keeping the strange tuning forks in eyesight (you never know).

I wouldn’t call myself an alternative-healing prude—I have found great relief from chronic pain through acupuncture and other “untraditional” treatments. Still, although several friends have sworn by reflexology for years, I had yet to try it. Let alone when coupled with tuning forks, gemstones and essential oils.

I relaxed on the heated treatment table (so far, so good) and I got the full scoop about the strange assortment of instruments and the concept of balancing energies. Christina started by checking my chakras with a pendulum before employing the forks. Apparently, these are not musical tuning forks, although they do bear a resemblance. Instead, they are instruments specially made to vibrate with each chakra. “Theoretically, when all of the seven major chakras are in harmony, diseases cannot ensue in the physical body,” she explained. “Ultimately, the goal is to reach the highest level of self-awareness or enlightenment. It is quite similar to tuning a stringed instrument. Our bodies consist of not only physical matter but of energy as well.”

It turned out my four upper chakras (the crown, third eye, throat and heart) were blocked. A traffic jam on my trip to nirvana. To clear them, I needed specific gemstones and essential oils applied to each chakra. Christina rubbed some myrrh into my crown and placed an amethyst nearby. She used another essential oil on my third eye (forehead) and placed a piece of iolite on my brow. For my throat chakra, she used bergamot and a lapis lazuli and rested a piece of rose quartz above my heart.

Once I was set up with gemstones and essential oils, the reflexology began. Just as each chakra relates to different parts of the body, each part of the foot corresponds to an organ or system in the anatomy. Reflexology is the process of manipulating the pressure points on the feet to affect other parts of the body. Pressing a certain point on the arch of the foot would impact bladder function, for instance. It is important to note that reflexology is not meant for diagnosis or cure, but many have found it a great complement to more traditional treatments. Special attention was given to the areas related to parts of my body that needed work. To compare it to a foot massage would be like comparing brushing your teeth to a cleaning at the dentist. These manipulations were precise, sometimes deep and only occasionally uncomfortable. But it was also incredibly soothing and de-stressing. I’ll admit it, I fell asleep. 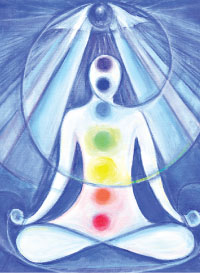 After the footwork, a tuning fork for each of my blocked chakras was tapped to begin its vibration. “Our chakras each vibrate on different wavelengths and each tuning fork is meant for its own chakra,” Christina explained. “Emotional issues that are harbored need to be released in a healthy manner. If it is not, the physical body bears the consequences, hence illness. Tuning up our body, mind and spirit creates greater health, peace and clarity of mind and spiritual growth.”

At the close of the session, a cup of herbal tea in Breathe the Spa’s welcoming vibe and earth-toned orb of chill slowly brought me back to reality. (Was I really in Rocky Point?) The entire experience was about an hour and a half, but I felt like I had been away much longer. I was both relaxed and energized.

Author’s Note: Later, I checked in with Syosset’s Rain Spa & Boutique for a little extra information about reflexology. They are also enthusiastic about the practice, suggesting the treatment for a variety of ailments like headaches, back pain and digestive problems but strongly advise pregnant woman against it as it could trigger premature labor.
Chakras are believed to be spherical life force energy centers emerging from major nerve ganglia connected to the spine.