There’s no one else in the world like your special someone. You could search and perhaps even find an “almost,” but chemistry—that elusive, systematic, highly exacting science—would eventually prove that though you may have found someone “just like” your beloved, you still have an impostor on your hands.

So too the rarity of precious metals, which is why they are such apt gifts. Gold, for one, is so rare that despite all the mining done worldwide, the annual production could fit in your master suite, granted a very large master suite. In fact, so little has been mined in all of history that combined it would only be enough for each of the seven billion humans on Earth to own a mere five wedding bands of simple 18k gold. 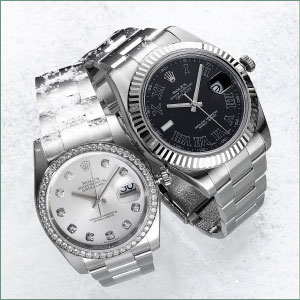 Precious indeed. Fortunately, a little goes a long way. Gold in its purest form is always yellow, but it is so soft that it has almost no practical use. Thus, yellow gold is mixed with other metals to give it strength, like palladium or even zinc, before rhodium metal plating is added to create a finished white gold. To create rose gold, which has been the big metal in men’s watches and accessories these last few seasons, metallurgists add copper, the level of which depends on the desired “reddening.”

Copper is a derivative of the stars, making quite the interesting backstory for your precious present. It lies deep in Earth’s crust and is extracted through mining or leaching. Extremely resilient, it appreciates almost no loss of quality when recycled; about 80 percent of all copper ever mined is still in use today. Ironic, considering most architectural copper is often green and oxidized, giving the impression of instability. 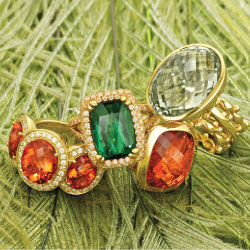 Silver is among the most readily available metals because it is obtained primarily in the refining process of other metals like copper, lead and zinc, and it is highly workable. A little acid and electricity will anodize it to manipulate the white finish and achieve colors ranging from blue to green to black.

France’s extravagant Louis XV professed platinum to be the only metal fit for a king because of its rarity and durability. Distinguished by a lustrous sheen, rather than brassy shine, it is also desired for its subtly and elegance. Of all precious metals, platinum is the most coveted because it is considered to be the most exceptional and the least corrosive. This is why it remains the most sought-after white metal for symbolic pieces like wedding and engagement rings.

High Voltage Conductors
Like all things animate and inanimate, metals are known to have energy qualities. Gold has been used for practical medicinal purposes, as in dentistry, for 4,500 years. And allusions to gold treating arthritis, certain types of cancer and even alcoholism have been made since time immemorial. The ancient Egyptians consumed gold as a means of spiritual purification, too (it’s reported to have a stabilizing effect on the heart and circulation). 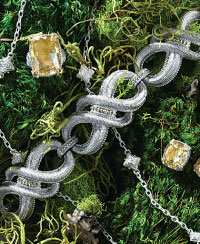 Copper, “mankind’s first metal,” is not without its own devices. It can be taken as an antioxidant to neutralize free radicals in the body and is also a metabolic aid—and what girl doesn’t like that? When consumed in small amounts, it works to benefit the hair, skin and liver and fight against infection and excess fat. Back to those Egyptians. They used copper pipes in water filtration because they believed the metal would destroy parasites. Winemakers in France still use it on the vine to fight fungi. Because it is such an agreeable conductor of heat and electricity, spiritualists and psychics rely on copper to amplify mental and spiritual communications. 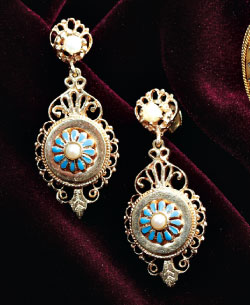 Circa 1910 platinum and 18k yellow gold earrings with old mine pearl and enamel available at Le Joaillier, (516) 759-1133 in Locust Valley and lejoaillier.com

But silver has the highest conductivity of all metals. Although it can appear similar in color to white gold, it is naturally a “high white.” The silver so commonly used in jewelry, the one marked 925, is actually sterling silver, a harder version of the metal. Because of its abundance and malleability, silversmiths can work more extensively in their media than metallurgists of other metals. These characteristics, in addition to its ability to transmit heat and electricity, are also why it’s such a convenient choice for applications ranging from mirrors to electronics to dentistry. Dating as far back as the Phoenicians, silver has also been used as water vessels and utensils because it is germicidal and has some antiviral and antidisease properties. 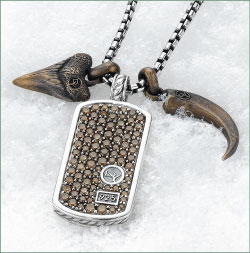 The “youngest” of the group is platinum, discovered only as recently as the 16th century. It can be produced commercially, as a nickel byproduct, but it is one of the rarest elements, found deep in Earth’s crust. In addition to its rarity, it is so coveted because it is non-reactive and considered to be the most resistant to corrosion. Only a few hundred tons are produced annually, yet it is included in vast array of catalytic converters, laboratory and electrical equipment and also in chemotherapy. Enigmatically, it can be banged out thinner than any other in this group and it can dissolve in acid. Its capacity to never tarnish is why swank watchmakers like Vacheron Constantin, Patek Philippe, Rolex and Breitling include it in their limited edition pieces.

All of these metals (and some of their impostors) made bright, shiny statements on the runways for the upcoming spring season, but which one will make the best gift for your beloved? All, of course. When selecting the Valentine of choice, the focus should be on the style of your special someone rather than the media. As history has shown, these precious metals hold the test of time. Choose a piece that suits the wearer and there will be nothing “almost” about it.