Enter the water snake, 2013. A creature marked as highly intelligent, enigmatic, motivated and lucky in business is the one who will guide the Chinese lunar year commencing February 10th. Snakes are known for their poise, beauty, elegance and cunning (Jackie O was born in the year of the snake), but this year is compounded by the water element. Stay alert! Deception abounds. Snakes are graceful and exciting but dark, intriguing and fascinating. They are cultured and enjoy life, but they keep their cards close. You will never know a snake’s true feelings if s/he does not want to tell you. In business, a snake will always make things work out, no matter what scheming is required. But beware! If entering into partnerships or deals this year, count the dollars and keep them safe.

The 15 day celebration
It is said that the first Chinese New Year occurred to banish the monster Nian, who was attacking crops, livestock and children. According to one version of the Legend of Nian, villagers first kept the monster at bay by leaving plates of food outside for him to eat. When they realized he was fearful of the color red, they began to dress and decorate in glorious crimson as well.

Whatever the origins, the Chinese New Year celebrations seen in modern New York and elsewhere include a rich display of red decorations, red clothing and lighting firecrackers. Celebrations last for different lengths of time, but a typical schedule associates a particular activity with a certain day. In China, this means 15 days. Parades or lion dances are held both on the first and last weekends. The start of the festivities changes every year, depending on when the lunar and Western/Gregorian calendars start to overlap. Above all, the new year is primarily a time for family and fresh starts.

Each day plays a unique part in the festivities. A typical Chinese New Year celebration agenda might include:
Eve: Pre-spring cleaning to get rid of old bad luck and make room for new good luck, getting new haircuts for a fresh start, getting all the decorations and flowers, paying debts and sending gifts. A big family reunion dinner is also common.
Day 1: Welcome gods and spirits to earth with fireworks, celebrating the good spirits while chasing the bad away. Honor the older generation.
Day 2: Businesses are blessed, dogs’ birthdays are celebrated and married women visit their parents and friends.
Day 3: Visit a temple, have your fortune told.
Days 4-6: Reopen closed businesses.
Day 7: Turn a (symbolic) year older during a communal birthday.
Day 8: Employers treat employees to a big meal as thanks for the year’s work.
Days 9 and 10: For some Fujianese and Taiwanese, it’s a day of prayer and presenting food like sugarcane, noodles, six vegetables, cakes, wine and more to the Jade Emperor on his birthday.
Days 12-14: Cleanse with a vegetarian diet.
Day 15: Culminate the New Year with the Lantern Festival.

The world continues to modernize, changing how individuals adapt new year festivities to suit their lifestyles. The basic traditions hold strong, but things like what to eat and when to perform certain rituals and gatherings may vary from family to family. Above all, the new year is primarily a time for family and fresh starts.

Five Can’t Miss Kung Fu Movies
Enter The Dragon might have been your first introduction to kung fu, but these foreign action flicks go beyond that prerequisite, delving deeper into the genre. Put them in your queue and get ready to read some subtitles, but skip the General Tso’s chicken which, unlike these flicks, isn’t really Chinese.

The One-Armed Swordsman (1967)
A pioneer in an era of gore and violence.

Master of the Flying Guillotine (1976)
Many moments of lunacy with characters running on walls and ceilings. Bonus: A man with extendable arms.

Five Deadly Venoms (1978)
A dying teacher sends a student to track down former disciples. Each has a different fighting style based on a scorpion, snake, centipede, toad and lizard.

The 36th Chamber of Shaolin (1978)
On the short list for best fight scene ever.

Drunken Master II (1994)
This is one of Jackie Chan’s masterpieces. He does his jaw-dropping stunts (literally) without a net. —RE

The Lion Dance
by Nada 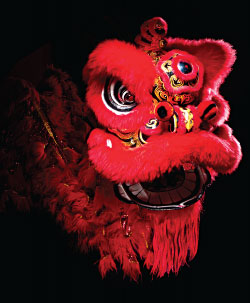 Cymbals shatter with the speed of a bird’s wings against window panes. Drums gutter the low beats of thunder…Enter the Lion.

The mighty, agile, fringed mystic stomps and preens, his motions are part thoroughbred, part playful dog. Shaking, flickering, blinking. At once setting the beat and following it. This is the wild, tamed power of the lion dance. Our breath is suspended in the flashes of red ribbon and shakes of gold cymbals around him. This is his command of the space, taking every inch. He is steward of the energy here, banishing evil through the purity of his dance, his intent, protecting villagers from the monster Nian since the Third Century BC.

It is a new year, it is a grand opening, it is joy, prosperity and happiness. The lion first appears slowly, scouting, stalking his space. A festoon of lights and fireworks around him. His pace quickens. And with it, the glittering of his movements becoming acrobatic, rolling, turning, kicking, jumping. Two dancers beneath the costume move as one, only their fringed legs showing. Syncopated, staccato. Animating the lion’s ornate face and colorful flowing mane, the ticks and twitching ears captivate the audience’s imagination. This creature is alive. The design of two hearts beating as one. Leaping across pillars, one on the other’s shoulders. Shaking the beast’s rump, blinking his eyes. The magical mirror on his forehead banishing evil spirits. Drum roll, another leap. A leg lifts, waves to the applause. The beast leaps on hind legs to the next pillars and then down to the ground, somersault to all fours. A wash of gold, black, green, red and white—the elements of earth, water, wood, fire and metal—rolled together as in the tumbling of life. Five cymbalists and one drummer culminate a finale to tame the beast. He returns to his belly at their feet, for now. 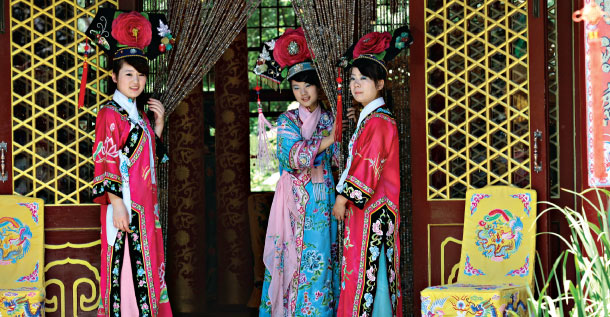 Field Guide to Chinatown
There is more to Manhattan’s Chinatown than the souvenir shops on Canal Street and the restaurants of Mott Street. The neighborhood is steeped in culture, commerce, family and food that are as beloved as they are evolving.

The Museum of Chinese in America at 215 Centre Street is an ideal first stop for information about Chinatown past and present, with multimedia exhibits on everything from fashion to film and current events to comics (on display through February 24). It is also home base for regular walking tours of Chinatown’s history and eateries. mocanyc.org.

Nom Wah Tea Parlor at 13 Doyers Street has been in the Tang family since 1974, but opened in the 1920s as a bakery and tea parlor. It’s also NYC’s first dim sum parlor. Its vintage, mid-20th century feel, along with fantastic dim sum and tea, continues to attract long-time customers, tourists and TV/film location scouts alike. nomwah.com.

The Original Chinatown Ice Cream Factory is a must on any tour of Chinatown. An unofficial landmark and one of Chinatown’s oldest businesses, the shop at 65 Bayard Street is a family affair in its second generation of Seid family ice cream makers. There are cakes and t-shirts, in addition to unique flavors such as almond cookie, black sesame, lychee, taro, red bean and green tea. chinatownicecreamfactory.com.

Aji Ichiban is a candy store at the intersection of Mott and Pell Streets that features universal favorites like jellybeans and gummy-anything next to distinctly Asian treats, the likes of dried mango strips, wasabi peas, salted plums, various cola-flavored candies and milk candies. There are also medicinal treats and everything sells by the pound.

Chinatown Restaurant Week is an annual event that takes place every March and the diverse array of dishes—from traditional to fusion—provide an affordable way to chow down on multi-course meals (often for $18.88, the number 8 is an auspicious number) and delicacies that have something for everyone. —HC

In the Red
“Hong bao” literally meaning “red packages” are perceived as being good for business and warding off evil spirits. The money within the envelopes—which are given by married couples to unmarried individuals, usually children—goes towards that good fortune and should usually be an even numbered amount, preferably including the good luck numbers six or eight.

The color red is the predominant color in Chinese New Year celebrations. It is used in lanterns, clothing, money envelopes and decorations to bring good luck, prosperity, good fortune and happiness to those within the home. But the color also symbolizes virtue, truth and sincerity, which is why it’s so commonly used in Chinese décor throughout the year.

Bright colors such as gold, orange and purple are also worn during celebrations to scare away evil spirits and bad fortune for the coming new year. Not surprisingly, gold represents wealth and good fortune. As this is a springtime holiday, the bright colors and new clothing represent rebirth and new beginnings. Green, representing springtime and flowers, is naturally a big part of any spring festival. Homes and stores are decorated with sprigs of plum blossom, narcissus and sunflowers, as well as sticks of bamboo and leafy bunches of kumquats and oranges. The blooms and fruits symbolize good fortune and life.

The Chinese can be pretty superstitious people, so how a color or other symbolic item sounds when spoken in Mandarin or Cantonese often plays a part in how lucky it is. For example, “red” is spoken as “hong,” a variation of which sounds like the word for “prosperous.” However, beware the number four, as the sound for “four,” roughly “si” in Mandarin and “sei” in Cantonese, is similar to the sound for “death.”—HC