The captains of commerce who created Long Island’s Gold Coast often copied the architecture they had admired during trips to Europe. The homes they built included Tudor mansions, Mediterranean estates and, here and there, a castle. Meanwhile, slightly more modestly, farther east on the South Fork, an accomplished potter constructed his own fairytale retreat.

Today, many castles are gone, like the once-grand Ferguson’s Castle in Huntington, because the owners or surviving family members sold the properties (or ran out of money), but some have endured…

Castle Gould (and Hempstead House)
Howard Gould, son of the financier Jay Gould, purchased 350 waterfront acres in Sands Point in 1901 and soon started building an imposing 100,000 square-foot stone behemoth. It was inspired by Kilkenny Castle, built in Ireland in 1195, but there was a problem: “His wife didn’t like it,” said Jean-Marie Posner, vice-chairman of the Friends of the Sands Point Preserve, a volunteer organization that maintains, renovates and operates the property. They divorced and Gould embarked on a new home on the same property, Hempstead House. He completed it in 1912, echoing some of the nearby castle’s architecture, like crenelated rooftops. But it’s more inviting, featuring a pretty sunken palm court, a billiard room with a gold leaf ceiling and a terrace overlooking the Long Island Sound. 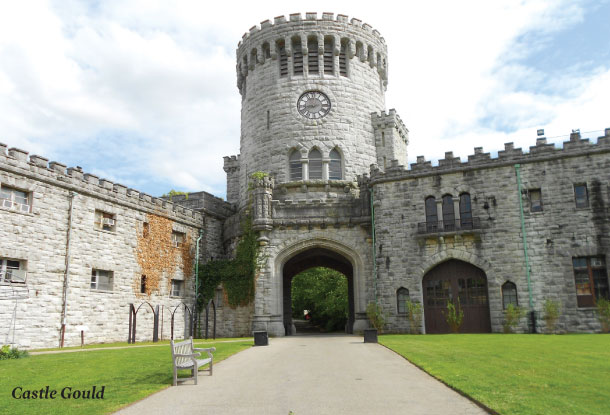 “It makes you think, ‘I could live here,’” said Karli Hagedorn, chairman of the Friends group, contrasting it with the castle, which became the estate’s stable and servants’ quarters. Still Gould decamped to Europe and in 1917 Daniel Guggenheim and his wife Florence bought the property and lived in the luxurious Hempstead House until his death in 1930. Florence Guggenheim then built herself a cozier residence on the grounds and, in 1940 during World War II, opened the larger home to British refugee children awaiting foster homes and as an aircraft observation site.

In 1946, the US Navy acquired the estate and gutted the interiors of both buildings. When it moved out 21 years later, Nassau County turned the estate into a park, now covering 216 acres. The Friends have been restoring the buildings and grounds and offer walking trails, tours, yoga classes, children’s programs, concerts and other presentations. They also rent space for catered events and for film and television work, both of which help raise funds for more restoration. 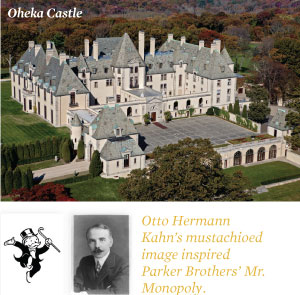 When Otto Hermann Kahn, a distinguished investment banker and patron of the arts, built his Long Island mansion, he didn’t call it a castle. He named it simply Oheka, after the beginning letters of his name. But surrounding residents referred to it as “the castle,” said Nancy Melius, whose family rescued it from decline and now runs it as a hotel, catering emporium and film and television location.

Indeed, it fits many castle criteria. Perched on a hill that Kahn built up to be the highest point on Long Island (though that designation is disputed), it cost $11 million when completed in 1919. That would be about $110 million today. At 109,000 square feet, it was and still is the second-largest private residence in America (after Biltmore, a Vanderbilt estate in North Carolina). It was also fortified, another part of the castle definition, because he used limestone, steel and other fireproof materials so it could not burn down as his New Jersey home did. Even the handsome “wood-paneled” library is actually made of wood-toned plaster. His 443 acres included an 18-hole golf course. Another lesson learned in New Jersey: He was rejected by a country club because he was Jewish so he built his own.

Kahn had wanted to be a musician and entertained lavishly on his estate. His guests included George Gershwin, Harpo Marx, Dorothy Parker, Arturo Toscanini, Paul Robeson and Charlie Chaplin, to whom an entire room is dedicated in present-day Oheka. In 1934, Kahn died of a heart attack. Five years later, a time when many Gold Coast mansions became too expensive for their owners to maintain thanks to the Wall Street crash, his family sold Oheka to the Welfare Fund of Sanitation Workers, which used it as a retreat renamed Sanita. Later, it became a radio school for the Merchant Marines and then home to the Eastern Military Academy, which went bankrupt in 1979 and abandoned the property, leaving it to fall into disrepair.

In 1984, developer Gary Melius bought it for $1.5 million and embarked on a lengthy restoration, investing over $30 million so far. A new restaurant opens this year, said Nancy Melius, a vice president in her father’s company, and eventually an archive room, for which she is collecting memorabilia. A recent purchase: A CD on which Fanny Brice sings “Is There Something the Matter with Otto Kahn?” in the 1930 movie Be Yourself. 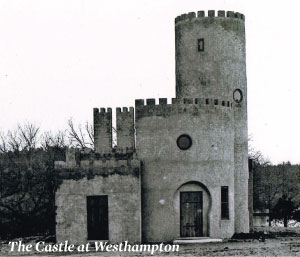 The Castle at Westhampton
Driving along Montauk Highway in Westhampton, you may come across the wondrous sight of two 12-foot-high swordsmen statues guarding the entrance to a small turreted castle that looks as though it could be part of Disneyland (and rumor has it, may have inspired Walt Disney). It was created in the early 1900s by Theophilus Anthony Brouwer, Jr., a noted maker of glazed vases (the Metropolitan Museum of Art and the Smithsonian own pieces he made). He modeled it after a castle near Seville, Spain where he studied, according to Bejto Bracovic who now owns the castle and the restaurant next door, Casa Basso, in a low building that once held Brouwer’s studio. A golden lion and various other Brouwer sculptures dot the property. “He built it himself,” said Bracovic. “It took him years.” Old photos reveal the castle was originally made of brick, with cement and stucco added later. Another undated old photo shows that at one point it became The Castle Inn. Brouwer died in 1932 and in recent years the castle housed a magazine office, a disco and an art gallery. Currently, it is rented by Melissa Van Tassel and her husband Dean, who decorated it with chandeliers, candelabra and a throne, offering various catered packages. The most popular are the glittery “Princess Parties.”

Gilding the Lilies
Xanadu, the mysterious mountaintop castle where wealthy media mogul Charles Foster Kane spends his last years, appears at the beginning of Orson Welles’ 1941 Citizen Kane, but it’s really Oheka Castle you’re seeing. Likewise, those shots of a majestic estate with a cobblestone courtyard owned by a millionaire and inhabited by the heroes of USA Network’s current Royal Pains—Oheka again. In between, the castle has hosted many other films, TV shows and photo shoots, as well as celebrity guests like Alec Baldwin, Lindsay Lohan and Dolly Parton.

Hempstead House has been a bigger draw for film and TV crews than its big brother Castle Gould. It stood in for Miss Havisham’s mansion in the 1998 adaptation of Great Expectations starring Gwyneth Paltrow. It was also used for the short-lived 2009 NBC series Kings and the far more successful ongoing HBO series Boardwalk Empire, including a scene in what Jean-Marie Posner and Karli Hagedorn of the Friends of the Sands Point Preserve like to call “the naughty room”—a glamorous upstairs bedroom that represented a brothel boudoir.

If the Castle at Westhampton has ever been recorded for film or TV, there’s no ready record. But the adjacent restaurant has had its share of glamorous visitors, including Burt Lancaster, Joe DiMaggio and the once-golden couple Richard Burton and Elizabeth Taylor.