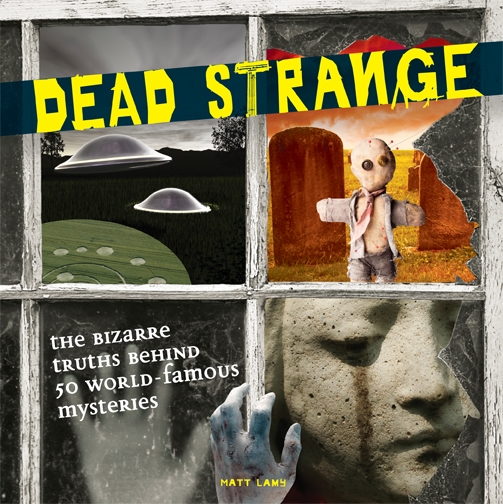 Your entire life, it seems, runs on a need-to-know basis.

Unfortunately, you’re always the last who needs to know.

Something exciting happens in your family, and you don’t find out ‘til it’s over. Some big event is scheduled and you miss it. Everything’s a surprise because nobody tells you anything.

But maybe nobody’s telling you anything because, well, maybe they really don’t know, either. Case in point: the new book “Dead Strange” by Matt Lamy, where you’ll read about fifty gigantic unknowns.

You’re already aware that there are a lot of weird things going on in the world. You might wonder if vampires are real, if Bigfoot exists, or if there’s really a monster beneath Loch Ness. What’s the truth about mysteries like this?

Is it possible, for instance, to turn common metals into gold? Matt Lamy says no, but that doesn’t stop modern science from trying alchemy of another sort.

And what about creatures from Outer Space? Do aliens exist? A number of folks claim they do – including some U.S. government officials. There are a lot of secretive things going on near Roswell and Area 51, there are people who say they’ve been abducted by aliens or have seen spaceship crashes, and then there’s the myth of Men in Black that may not be a myth at all.

The jury’s still out on whether Anna Anderson was really the daughter of Czar Nicholas of Russia. Dowsing is doubtful, too; in fact, there’s a million-dollar bounty for definitive proof that it works. El Dorado may or may not have been discovered by Conquistadors. Jack the Ripper was real but nobody yet knows his true identity. Spontaneous human combustion appears to be a genuine phenomenon, and it actually happened in Ireland just a little over a year ago.

There really was a Great Flood, and Noah’s Ark may lie on Mount Ararat. The Ark of the Covenant might lie somewhere beneath piles of sand. There’s more than what meets the eye on those massive Easter Island statues. Crop circles still make scientists scratch their heads. And Ouija boards? Leave ‘em alone. It’s “best to be careful with things you know little about.”

Sometimes, you just need a bit of weirdness in your life. And you can’t get any weirder than the things you’ll find in “Dead Strange.”

From unknowns in pop culture, to holes in historical knowledge and real scientific mysteries, author Matt Lamy pokes around to find solutions to fifty conundrums that have, for centuries, confounded amateurs and experts alike.

The interesting thing about “Dead Strange” is that, despite its subtitle and a wish for answers, there is little “truth” here, only conjecture and clues. That makes what you’ll find in these pages even more intriguing, which makes this book irresistible.

While this book is meant primarily for conspiracy theorists, believers, and doubters ages 13-and-up, I also think there’s plenty of appeal here for grown-ups who want a quick overview on mysterious topics. If that’s you, then grab “Dead Strange” because you’ll enjoy it, you know.